Impartial arbitration: Tapping into the unconscious

Arbitrators and adjudicators promise to be impartial, but can they be unknowingly biased towards one side?

It never dawned on the arbitrator, or adjudicator for that matter, that his judgement might be skewed. It’s called unconscious bias. Tricky territory, since if it eventually is explored and is skewed there is a real chance that the dispute decider’s award is null and void; money down the drain. A recent case saw the lawyers knocking on the door of “unconscious bias”. They didn’t get in but I bet you sooner rather than later that door will burst open. Let me tell you the story.

So, how does this “unconscious bias” arise? The High Court judge was told that this type of bias is not any actual predisposition to decide the arbitration in favour of one party. Nor was there any suggestion of conflict of duty, nor some form of interest in the case. The first worry is that the arbitrator may unknowingly lean towards a firm who also gives him business. In other words, since X’s solicitor already instructs the arbitrator as a barrister he may wish to foster the relationship and not want to disappoint the firm with an arbitral award unfavourable to the solicitor’s client. He may be “customer building” and swerve his award (as might an adjudicator) unconsciously. Another worry is that an “ongoing relationship” might result in him being unconsciously influenced by the confidence he had in the firm. There is more. The arbitrator, it was argued, might find himself defending the conduct of the solicitor when their opponents attacked their behaviour. Do you begin to see what is meant by being predisposed towards one side or the other? Do you see how none of this is deliberate? It was also argued that while the arbitrator had his barrister hat on in this unconnected matter, he would be visiting the solicitor’s offices for conferences and so on and would effectively be in contact with the other side in the arbitration in a manner that is not visible to the other party. He might let slip something about his thinking in the arbitration that could influence the outcome. On top of all this the arbitrator can be said to have a financial relationship with one side, meaning that his fees as barrister might be “softer in negotiation”. In other words, since he is the arbitrator it will be easier to negotiate a larger fee for the barrister work. So, given he has a relationship with a party’s solicitor, it is possible to see chinks in the arbitrator’s promise that he is independent and impartial from both sides.

You might see how all this could apply to an adjudicator. Take the quantity surveying adjudicator who also acts as expert witness in separate matters. He is on the lookout to be appointed expert witness because he does that work as well as being the adjudicator. If one firm of solicitors feeds expert witness work to the same chap, who is the adjudicator from time to time, he forms a “relationship”, an unconscious lean, an unwitting warmth towards one side. And if you were on the losing side and you found out about this warm relationship, well now you would perhaps be a little put out.

The High Court judge would have none of this. He would not expel the arbitrator. He reckoned that any barrister who is the arbitrator was above all these possibilities. The judge could not see these circumstances causing the arbitrator-barrister to favour or disfavour one party. He said that an outsider would not find unconscious bias. Well, I would like to hear what the world of psychology says about all of this. All this is attempting to understand behaviour below the surface - emotion, motivation, the unconscious mind - and what it does to the decision maker, the arbitrator, the adjudicator, the judge. Tricky territory, how the mind works. 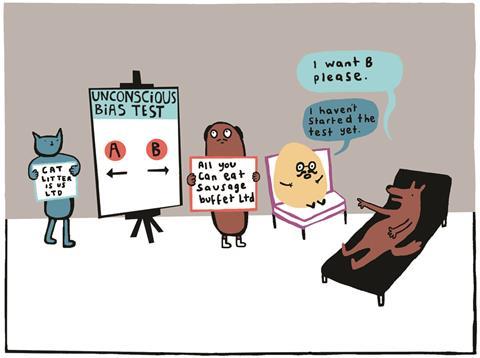 Tony Bingham is a barrister and arbitrator at 3 Paper Buildings Temple. To read other articles by Tony, click here