Judges in their own cause

Architects are always unbiased and even-handed when awarding extensions of time under usual forms of contract. Except, of course, when the reason is their own negligence

I gave a talk the other night to the CIOB and the RICS at Hatfield, and I failed. I failed to persuade them that when an architect awards an extension of time under our everyday forms of contract, their behaviour and judgment are impeccable, that they are wholly and completely independent of their client’s wishes, and that they are always non-partisan, unbiased and even-handed. And when I asked “what do you think of the show so far?” they yelled “rubbish!”

If these CIOB and RICS folk are right, then all the fancy extensions of time rigmarole in the forms of contract is a waste of time

My audience explained that that’s the way the architect ought to be when handing out extensions of time, but they aren’t. We learn something new every day, don’t we? If these CIOB and RICS folk are right, then all the fancy extension of time rigmarole in contracts is a waste of time. No architect, they said, would give an extension of time to a contractor if the reason for the extension was the architect’s own negligence. That might end in a disaster for their practice.

I recall the case of Plymouth & South West Co-op vs Architecture, Structure & Management back in 2006. The Co-op and its architects had worked together for many years. That relationship ended with a job budgeted at £5.5m, for which the final account was £7.8m. The job overran massively: there were huge numbers of change orders, there was a shedload of provisional sums, there was a list of delayed and disrupted subcontractor’s claims.

Dear me, said the contractor to the architect, you have been slow in issuing the information we needed to build the building; you have been asked on a daily basis for the details for this and that and how the wiggle-board is supposed to link to the curved return cornice. 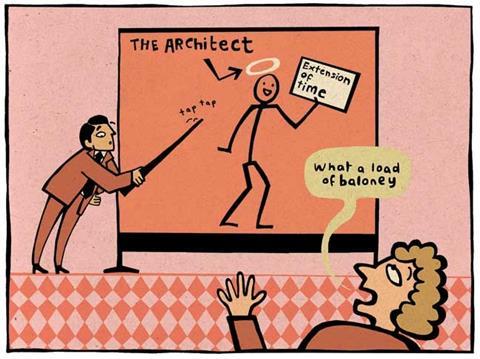 On the “Plymco” job it was eventually shown that the lack of progress in erecting the building was the result of a series of significant acts of negligence by the architect at every stage of the project, and it was those that led to the extra costs.

So the millions of pounds overrun caused by all this had to be paid by the architect, because the employer had to pay the contractor. So if the JCT building contract is properly applied and extensions of time awarded, and disruption costs and prolongation costs and variation costs certified by the architect, they must independently and impartially do so; and then they take out a little gun and shoot themselves in the foot.

That’s why my audience doesn’t believe that all this even-handedness gets done. If they are right, then putting it at its most generous, the architect will be unwittingly, and understandably, biased towards the saving of their own skin.

At trial, Plymco was awarded the millions in damages and also its legal costs. But what troubles me is that if it is the case that the architect resists every endeavour of the contractor to be paid for all these problems, the contractor has to go to adjudication. But the adjudicator and contractor are unlikely to actually have revealed to them the story “up-the-line”. So it’s a contest with one arm tied behind your back. Tricky again.

As to Plymco and its money, the architect never did pay. That solid, long-established and highly respected practice went bust. So Plymco began another court action against the insurance companies in the background and eight years after the building got finished, they got their money.

As for me, I am not so sure there is bias … more like a perception of bias, but that’s life.