Leander vs Mulalley: In your own time, gentlemen, please

A contractor tries to claim loss because the subcontractor isn’t ‘getting on with it’. But what if the subbie is working hard - only to a different clock?

Mulalley’s order said: ‘All dates are indicative only and are subject to change.’ Hopeless. It has no contractual effect at all. It was indicative only. It imposed no obligation on Leander at all. Surprised?

In Mulalley’s own subcontract document is a clause which says Mulalley can terminate and dismiss the subcontractor, if it is not proceeding reasonably and diligently. And it came to pass that Mulalley decided that its subcontractor, Leander, was not proceeding reasonably and diligently. No, Mulalley did not terminate. Instead it sent Leander a bill, or rather, a withholding notice and stopped £131,000 from Leander’s interim account. Leander sued. By the way, Leander used the court instead of adjudication. That’s because Mulalley has one of those adjudication clauses, which requires their subcontractors to pay Mulalley’s legal costs in an adjudication regardless of who wins.

Now then, for Mulalley to claim loss and expense for its subcontractor failing to proceed reasonably and diligently, there has to be a term in the contract to that effect. If you have your lawyer hat on instead of your hard hat you might point to the right to terminate for failing to regularly and diligently proceed. Oh dear me, no. That clause only gives the right to terminate. You are looking for a right to compensation. It’s getting complicated already, isn’t it? Even more fun is that the subcontract with Leander worth over £1m for groundworks had an agreed period of 45 weeks and a firm end date of 8 August. As well as that, there was a bar chart with periods and end dates for various elements of work. Mulalley’s order said of the bar chart: “All dates are indicative only and are subject to change as required by Mulalley to suit the main contract programme.” Hopeless. It has no contractual effect at all. It was indicative only. It imposed no obligation on Leander at all. Surprised?

Mulalley complained that Leander had missed some of the bar chart dates and said that was evidence of not proceeding with due diligence, but there is nothing specific as per obligation in the contract other than to complete in 45 weeks. So Mulalley argued that because they could terminate for that bar chart reason, it was always implied in the deal that it was an obligation to do the work with due diligence. No, no, said Leander; the only duty on Leander was to get done by week 45 and since that date hadn’t arrived there was no withholding of cash since no right arose. It was not yet late. Leander simply said it could do the work as it so chose provided it hit the end date or any extension of time date. In short, if you can’t find a promise to proceed with due diligence, you can’t claim damages for dilatory progress; you can only terminate! Moreover, you can’t deduct for so-called main contract loss and expense because there is no promise broken. Fun, isn’t it? So, we are looking for an implied term whereby the subcontractor promises to proceed reasonably and diligently down to 45 weeks. An implied term is a silent promise, that is so obvious and reasonable that it “goes without saying”.

If you can’t find a promise to proceed with due diligence, you can’t claim damages for dilatory progress

Proceeding reasonably and diligently is one of those elephant words - easier to recognise than describe. It means, “to get on with it”. As to whether it exists in the deal, there is seemingly a developed principle that a contractor is entitled to plan and perform the work as he pleases provided always that he finishes it by the time fixed in the contract. He can suit himself. As for such a phrase in a subcontract, which requires the subcontractor to “suit the progress of the main contract works”, it only requires the subbie when choosing his mode of working not to unreasonably interfere with the actual carrying out of other works. It does not require him to plan his work to fit in with others.

In this particular case, the judge said Mulalley had failed in its “ambitious undertaking” to demonstrate a silent promise existed in the contract that Leander had to proceed reasonably and diligently so as to allow Mulalley to claim loss and expense. So the withholding of all that cash was unlawful and Mulalley was ordered to pay up. 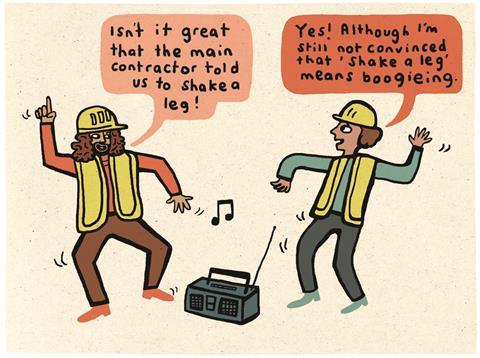