Let me draw you an analogy ... 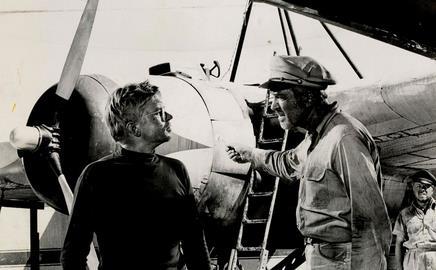 Adam Poole and Simon Foxell Should we rush to launch our grand campaign to achieve zero-carbon buildings asap? Or should we settle back and watch a film first?

Does anyone remember the 1965 version of the film The Flight of the Phoenix? A twin-engined plane crashes in the Sahara and is rebuilt in a single-engined version to fly the passengers to safety. There is tension throughout between the engineer, played by Hardy Krüger (pictured left), who says it’s possible, and the pilot, played by James Stewart (right), who is sceptical. The climax comes after the plane has been rebuilt but the engine won’t start. There is a small and dwindling number of cartridges left to fire up the engine and there will be no hope if they are used up. At this point Stewart overrules Krüger and uses one of the cartridges – not to start the engine but to clean it out.

This is sort of where we are with planning and building control: do we pray that the system will be able to deliver a complex, low-energy, sustainable product, or do we spend resources cleaning it up for the challenges ahead? These were the battle lines at the recent ”Regime Change” Edge debate.

Chris Watts, principal author of the Halcrow report for the old ODPM on the unification of consent regimes in 2004, argued that the current multiplicity of planning consent systems have led to mediocre and mundane design, mixed messages, muddled approaches, meddling by the legal profession and professional objectors, more costs and delays to applicants, misunderstanding by the public and mountains of paperwork. He called for a radical restructuring.

Paul Everall, the former Building Regulations mandarin and now chief executive of Local Authority Building Control, argued that there is no parliamentary willingness to reform the system.

In the past we had two good, workable systems. Planning dealt with the location and appearance of buildings and the Building Regs were responsible for how they were built. As the regimes were required to do more, they started to overlap, particularly where sustainability and energy performance were concerned. Planners now require full sustainability statements, yet have no means of monitoring the result. Building for low or zero energy use requires the consideration of transport, orientation and massing in addition to construction methods and building management. It is difficult to make sensible whole-building decisions without dealing with all these issues together.

Adding urgency to the debate was John Callcutt, who is about to begin a review on behalf of the communities department. His task is to reconcile the “trilemma” posed by the need to increase the output of new homes from 165,000 to 200,000 a year, while making them socially acceptable and as close to zero carbon as possible. Two out of the three might be possible but it is not clear that all three objectives can be met.

When consent is given to a proposal based on its green credentials, what will be the consequences if it fails to perform as promised? Indeed, will anyone ever notice?

Is the existing system fit for purpose or will it distort what we are trying to achieve? Are we confident that when push comes to shove we can work around the plethora of laws and regulations (more than 20 consent regimes and counting)?

Building performance was identified as a main issue. There is a huge disparity between what developers initially claim and how they eventually perform. In the absence of tougher regulations or carbon budgets this is not yet an issue of consequence but as the energy environment gets more severe this may change.

So we need to take difficult decisions now for the tougher times ahead. When planning consent is given to a proposal, in part based on its purported green credentials, what will be the consequences if it fails to perform as promised? Indeed will anyone ever notice without a feedback loop from buildings in-use to the planning system?

A second issue was the nature of the decision-making process involved. Planning is part of local authorities’ democratic remit whereas Building Control is a standardised process administered by officials. There is clear government nervousness in allowing a lot of local standards to develop for building performance – even though all the main advances in recent years have emerged from local authorities, in particular Merton, Woking and the Greater London Authority.

This may make a unification of consent regimes a bridge too far and many feel that it is better to work at developing and achieving the zero-carbon community than trying to find a regulatory regime that just pushes it on its way. But even then, significant unification might even allow us to fly. If the question is whether we go with the engineer or the pilot, the answer is that we need both.