We’re all a bit inside-out and back to front this week. Morals overtaken by business deals, green protesters burning natural resources and Ecobuilders caring about fashion. Curious indeed …

How many people does a dictator have to kill before companies will rule out ever working for him again? Feilden Clegg Bradley said it would never work for Gaddafi again last Tuesday, after 230 deaths had been reported. Camillin Denny and Edward Cullinan Architects abandoned the dictator on Monday, when the toll exceeded 1,000. For engineers and QSs, however, the tipping point appears not to have been reached. Capita Symonds says it’s too early to say if it would work under the Mad Dog again, although what fresh evidence they are waiting on is unclear. Others, like Halcrow and WSP, openly say that business trumps politics. Signing off the corporate social responsibility report is going to be even more uncomfortable than normal this year.

Ecobuild, the sustainable building expo, has always been the place to be if you want to find out whether the embodied carbon of slate is worse than the impact on forests of woodchip pellets. Yet it has never been the arbiter of style. Until now. The Italian Chamber of Commerce has opened a pavilion at the conference and has been flogging tickets at £60 a head for a dinner at the “prestigious St Stephen’s club”. The dress code? “Elegant”. Presumably that ruled out hemp clothing for those lucky enough to attend on Monday.

Anyone excited about what strange new shapes could grace London’s skyline is likely to be disappointed by Bloomberg’s new HQ. A source close to the Square Mile scheme tells me the financial news service is planning a demure office block to counter its “brash” image, which is perhaps wise, given that the inside of their current abode is packed with Bond villain-esque fish tanks. Foster + Partners will have to rein in its creative urges on the scheme - its design with Jean Nouvel for the Walbrook Square development site, which never got off the ground, was dubbed “Darth Vader’s helmet” because of its bulbous shape.

Network Rail recently announced a major overhaul as part of a “Big Society”-style reorganisation. This involves slashing its 2,000-strong HQ workforce and creating 10 new regional director posts. Interestingly their glossy press release failed to mention the six-figure salaries set aside for the new roles. Is this part of the “Big Salary Society”?

As angry developers and housebuilders rail against the government’s planning reforms, housing minister Grant Shapps insists that, far from pandering to Tory nimby tendencies, they will make development easier. What to make of this blog then, on the party’s website, from Dewsbury MP Simon Reevell? He says that because of the “transformative” nature of the Localism Bill, council leaders “should now do the decent thing and suspend any planning consultations currently taking place in their areas until the Localism Bill is enacted”, to stop “unpopular developments” being “rammed through against the express wishes of local people.” Glad to see the nimbys have been well and truly routed in the party.

The website of High Speed Rail protest group, Stop HS2, says it opposes the project because “it is not green” and “has no environmental case”. So what better way to support the sustainability cause than to light over 40 bonfires along a leafy route between Buckinghamshire and Staffordshire? One wonders if the group’s flaming protests have already caused more environmental damage than the proposed £32bn rail network itself. 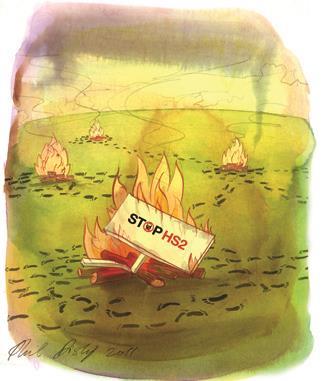