The graduate surveyor on sleeping with his iPhone, running marathons, and using LinkedIn for networking 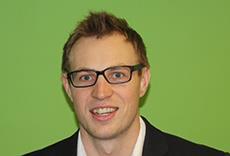 It would probably have to be the Daily Mail to catch up on all the latest current affairs. Although I’d have to admit I spend most of my time looking at the sports section – particularly the Premier League.

Having my iPhone next to my pillow when I’m asleep is not the best way to switch off.

I have an IPhone for my own personal use and Blackberry for work. I must say I’m not much of a fan of my Blackberry though, mainly due to the size of the keys for trying to type emails.

Yes, although I must confess I only dabble with Facebook and Twitter. I find LinkedIn to be the best social network for me – it’s an excellent way of finding professional contacts.

I predominantly use Twitter for just the PR side of our business rather than for myself. I do find that following the major construction and property magazines helps to keep up to date on new legislation and general market awareness.

Close one between the Sky Sports Score Centre, The Chive or Shazaam. Although I’ve recently become a fan of the Run Keeper app, which I’m using to help me train for the Stratford-upon-Avon half marathon at the end of the month.

I find even with the vast improvements in technology, you still can’t beat good old fashioned face to face communication.

Some new running kit from Amazon.

I’ve always been a PC man myself, however I’m slowly converting over to the dark side. Considering I’ve already got an iPhone, iPad and a couple of iPod’s I think a Mac could be next on the cards.

I would have to say Pompeii by Bastille has been the most popular for me over the last couple of weeks but it varies depending on what I’m doing.