Planning for stadiums: A sporting chance

Applying to build a sports stadium in an urban area can lead to a number of planning issues. But developers and contractors should point out the benefits it can bring to the community 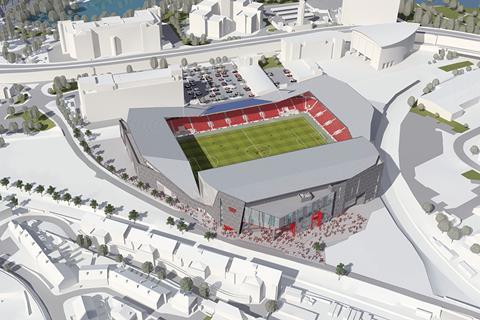 Over the past few years we have noted a marked increase in the amount of work relating to planning applications for sports stadiums, including the recent application for a new home for Brentford Football Club (pictured).

Sport generally has attracted new audiences over the last 20 years and as a result fans’ expectations are on the increase. No longer does a stadium simply consist of a few stands to accommodate spectators on a rainy day. Heated venues with mod cons, good views from all seats, easy-to-access ticketing, first class PA systems, hospitality lounges, adequate provision of catering outlets, and toilets to match those at other event venues are now taken as standard. In addition, these venues have developed into community hubs, with additional facilities to ensure they are more than simply match-day destinations.

So, what are some of the key issues that club owners, developers and contractors need to be aware of when considering plans for a new football stadium?

This in itself creates a number of unique planning challenges.

A key element to ensure the success of a stadium in a town location is the availability of existing transport links and a well thought-out series of improvement mechanisms and mitigation measures, to smooth out the peaks in travel demand that come on match days. Such transport issues, thepredicted impacts and the proposed mitigation measures will be based on information provided by the applicant in the transport assessment, the stadium travel plan and the local area management plan. Added to that is the outcome from discussions between the consultant team and officers from the local authority, together with careful consideration of representations received during the consultation process. The dual aims are that the travel demand forecasts are robust, and the mitigation measures fully effective in achieving stadium travel plan objectives.

The transport mitigation measures will need to be in place prior to the opening of the new stadium, and the binding commitments to transport improvements are dealt with via planning conditions attached to the planning permission and obligations in the S106 agreement. Those commitments should be closely tied to the transport information that was submitted as part of the application and so, for the applicant, there should be no surprises as to the requests for mitigation measures that are put forward by the local authority.

Most commonly, we have found that these will include measures to encourage fans to travel by sustainable modes of transport, for example: putting into place on-street match day parking restrictions; providing for all-in match tickets and travel passes; and improving off-site pedestrian access at key locations to ensure better through-flow of pedestrians on match days.

As well as planning for issues around match days, the local authority will be keen to make sure that well thought-out plans for the legacy of the stadium are in place. Over many years, central government policies have identified and supported the social and community value of sport and sporting clubs.

Increasingly sports, community, charity and education facilities are accommodated at a stadium as part of a football club’s ongoing commitment to building relationships with the communities that it supports.

With a new stadium, a club’s energy, commitment and engagement are also delivered by interaction between the club, local businesses and the wider community. Community benefits include sports and coach development, education support, volunteering, community cohesion and safety, health and wellbeing, economic regeneration, and the wider community benefits where the club acts as a catalyst for social, environmental and economic regeneration.

All of those benefits are material considerations that can be costed and valued and then play a significant part in the debate about the merits of granting planning permission for the development of a new sports stadium.

A thriving stadium development enables success not only for the club, but also for the surrounding community and businesses on more than just a match day.