Public procurement: Getting the hang of it

Public procurement rules aren’t there to be broken - Brussels’ orders. But it will help if you learn to juggle with their terms

‘Price is the starting point for the exercise.” Northern Ireland has become the proving ground for these super-clever (some say tortuous) public procurement rules. There has been an astonishing number of rows and litigation in the province about things like framework contracts for schools. The Court of Appeal there has just grappled with yet another big quarrel and all the lessons apply to efforts in the rest of UK to bid or get bids for construction work using public money. In this one, Northern Ireland’s education department had £600m allocated for new schools. So it plumped for a framework competition. The idea was to narrow the number of contractors from 12 to eight. Then as each school was ready to be built, there would be a secondary competition between these eight based on what sort of bid they put in at the outset. Snag is that the public procurement rules are trotted out by people who call themselves Europeans and common marketeers. Tricky planting all this into the psyche, so not surprising that we haven’t got the hang of the rules. The education department in Northern Ireland hadn’t.

To be fair about the NEC, it was invented in Belgium in 1756 and is best understood when translated back into Walloon along with the dialect of Picard

In short, when the list of contractors was whittled down, the lads left outside the framework tent saw red because they were now shut out from even a sniff of £600m of school building work. Long established, competent builder Henry Bros poked a stick at the rules. It said there was something wrong with the way the competition was conducted. The High Court judge agreed with Henry Bros. He ordered a stop to the whole affair; the framework could not come into effect. The education department came to the Court of Appeal. It said the first judge was right. It was a bad competition.

One of the European laws that runs Great Britain and Northern Ireland from Brussels, tells places like Belfast how to behave in a framework agreement. There will be a primary contest. It begins with a pre-qualification questionnaire. Anyone can have a go at that. Twelve contractors ticked the right boxes. So they were permitted to enter a tender. This is only a bid to win a place in the inner-circle who will bid again for each school. The second go uses the information in the primary bid to fathom which contractor builds the building. Winning a place on the inner-circle is up to the customer: here, the education department. However, it has to comply with “criteria for the award of a public contract”, says the European directive. The education department has to award a public contract on the basis of an offer which (a) is the most economically advantageous or (b) offers the lowest price. Those words “most economically advantageous” include weighting price, quality, technical merit, after sales service, delivery date and period of completion. Snag is that someone has to be clever enough to “state the weighing” that it gives to each of the criteria when requesting bids. Do you now get the feeling that this is all getting far too European and fiendish? Then the education department piled on the agony. It told the bidders that the contract document for the school buildings would be NEC3. Also that the assessment would be on all the ideas above with the fee percentage for defined cost pursuant to NEC3 options “A” and “C”.

That idea and talk of defined cost ranks as “fog factor 10” on a scale of 1-10 in Belfast. To be fair about the NEC, it was invented in Belgium in 1756 and is best understood when translated back into Walloon along with the dialect of Picard. Anyway something got lost in translation when Henry Bros was told the weighting mechanism hoofed it out of the competition.

Not to put too fine a point on it, the use of NEC3 defined cost fee percentages didn’t work. The NEC expert for the department told the judge that the fee differentiators gave “a clear indication of the most economically advantageous offer”. So far so good. But it was then said that each contractor’s basic cost would be almost the same because contractor A would pay the same for a cube of concrete as contractor B. And the judge didn’t go for that at all. So he, and the Court of Appeal, decided that since the competition was based on the fee uplift, it did not satisfy the European directive, which is based on the price of each school. That’s the starting point and finishing lane. As to the schools, they all got built outside any framework. How? The contractors bid in the traditional British way … lowest price by competent contractor. 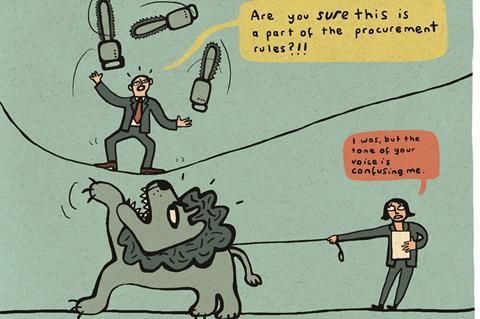