2:28pm Protesters have now begun to lobby MPs in Parliament ahead of tomorow’s debate on the cut. Thanks for following the coverage. For more on the feed-in tariff sign up to our newsletters and follow @buildingnews and @buildingsite on Twitter.

In case you’re new to the world of PVs and FITs here’s a backgrounder to today’s rally. 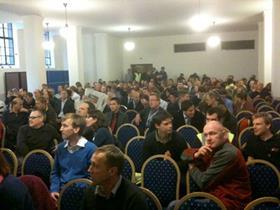 The government plans to slash the Feed In Tariff which is paid to householders or landlords for solar energy generated by their own solar panels and fed into the national grid from 43p per kWh to 21p per kWh from December 12.

Many in the solar industry accept that the cost of solar electricity panels has come down dramatically and some cut to the tariff is sensible. What irks them is that it has been done so swiftly, meaning it will be impossible for some projects to be completed to meet the deadline.

The tariff was due to be reviewed anyway and downsized, starting in April next year. But following the announcement on 31 November businesses were left with only six weeks to complete orders.

2:20pm @LukeAWalsh points out that the chair of the Canadian Solar Industry Association is a lot happier than his UK counterpart Jones after Ontario governmnet approves FITs scheme that will help create ‘a solar boom’.

2:05pm Howard Jones, the chair of the Solar Association speaks to Vern Pitt on Audio Boo. Catch it here. Jones says they’re not opposed to a cut. “They asked for 25% cut six months ago.” He says the problem was with the budget cap. “Potentially at best industry will be cut in half,” says Jones.

Interesting that Jones says he believes there is a good chance there will be a government U-Turn. Gossip suggests the government may be approaching a climb down on the cut, or at least the timing of it. The Daily Telegraph has reported that the government is considering phasing in the changes.

2:00pm More from Vern on Twitter. Alan Simpson, ex-MP and architect of the Energy Act, addresses the rally and jokes that minister must have been on drugs. According to Simpson: “The organised indifference of government officials is stopping a move to renewable energy.”

1:45pm @Veronbuilding Caroline Lucas, ]leader of the green party] points her finger at the big six energy companies for lobbying and bringing about the cut in

1:40pm Ian Gibson of Transform Solar tells Vern Pitt that the decision to cut fits has ‘cut the industry off at the knees’. Hearthe interview here.

Cut Don’t Kill campaigners will hold a rally before meeting MPs in Parliament. The protest starts at 2.30pm this afternoon.

So far protestors have heard from the two Carolines, Flint @carolineflintMP and Lucas, and Howard Jones, chair of the Solar Association.

Building’s Vern Pitt is at the protest and is Tweeting from the event. Listen to his interview with an installer here. He says: “I spent money training up a salesman last month but had to let him go.”

He states that government has cut the industry off at the knees, but he has yet to lay off staff - he’s just put expansion plans on hold.

A petition on the campaign website calls on government to stop the 50% cut in feed-in tariffs for solar PV. It states that current government policy could jeopardise 25,000 jobs in the industry.

This story will be updated during the afternoon by Vern Pitt.