If adjudication is used as an in-depth, sophisticated examination of a dispute, expect to pay the price for it - especially if you’re the losing party

It is fascinating to witness the evaporation of enthusiasm to be “nice” once one party to adjudication loses. Suddenly gone is the will to pay the adjudicator his fee.

It happened when loser Jerram Falkus Construction was supposed to pay. The temptation is to label the non-payment as spite. But let’s give Jerram Falkus the benefit of the doubt; it considered the adjudicator’s fee too much - excessive, it said.

The contract is for five residential properties in London. The customer is Fenice Investments. The contract is JCT Design & Build. The contractor said it was entitled to an extension of time on the contractual completion date of 15 June 2009 to 9 September 2009. The employer initiated the adjudication because it rejected the two reasons for delay. Reason one was that the floor levels on two of the houses saw the end product lower than the pavement outside. Tricky. Reason two was that the utilities companies completed their works late. Fenice said that since this was a design-and-build contract, it was for the contractor to design the works so as to achieve a proper interface with the pavement. As to the utilities delay, it was argued that the contractor had caused it.

Now then. I reckon the parties were using adjudication not as a mere rummage for an extension of time, but treated the process as a”let’s end it here” fight to the death. “All of the submissions (to the adjudicator) went into considerable detail.” That’s what Judge Waksman said when the row about not paying the adjudicator came to the High Court.

The adjudicator allocated his 56-hours fee at £350 per hour to be paid by the losing contractor. But it shouted “too much”.

So let me tell you the rules. JCT 2005 Adjudication applies rules called “The Scheme”, which is well known. The scheme makes both parties jointly liable to the adjudicator to pay. But as between the parties, the adjudicator also allocates liability between them. It’s called “costs follow the event”. Got the idea? Jerram Falkus was identified as the party to bear the costs
but if it didn’t pay (and it didn’t) then the adjudicator can sue both parties. And he did. Fenice, the winner, decided to pay the adjudicator. By then it had also spent £6,200 on its legal fees via its solicitor chasing the parties. Fenice then sued Jerram Falkus for the adjudicator’s fee and those legal costs and its own legal costs of another £3,200.

Fenice applied to the High Court for summary judgment. Judge Waksman looked at the adjudicator’s fee and work done. The adjudicator is experienced and fast. He can pack a lot of work into £350 an hour.

The judge accepted the rate as right, then he looked at the 56 hours. The judge warned that any party considering a fees challenge “will need to give careful consideration as to whether there is any realistic basis for disputing the fees claimed” and added an amber flashing light: “It is expected that in the usual run of cases there will not”.

Got it? The court approaches assessment as an exercise with a “margin of appreciation” given to the adjudicator.

So what did the parties put to the adjudicator? The referral was 28 pages. The response had 55 pages, 12 exhibits and sub-exhibits. There was a reply to the response with 29 attachments. There was a meeting to talk about all this and more written to-ing and fro-ing. There were objections to the right to adjudicate at all. All of this was looked at with the adjudicator’s time-sheet records. Judge Waksman would give no quarter to the notion that there was anything unreasonable. He ordered that the fees and fees in chasing the fees and fees for this High Court hearing all be paid by the contractor.

Let me tell you what is happening here. Highly sophisticated arguing in the adjudication, that’s what. Adjudication was intended to be a quick look at squabbles between parties, and was cheap for an independent outsider to referee. But folks are using it as though it is a trial for a hanging offence. And they demand highly qualified adjudicators to drill down through the evidence and argument in minute detail. 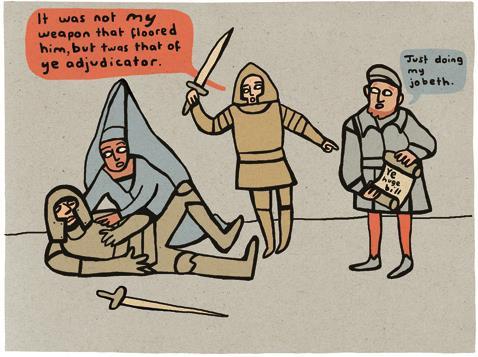