When is an adjudicator’s decision binding?

When there’s more than one adjudication in a dispute, then the decision made by the first adjudicator binds the others, right? Well, it all depends what kind of decision it was

If an adjudicator has already decided a dispute, no further adjudicator’s decision can be sought. So explained the judge in the recent Scottish case of WH Malcolm Ltd in its account dispute with Amec. The snag is whether the decision is a decision with a small “d” or a big “D”. Small “d” decisions don’t stop a second adjudicator tackling the same issue.

Malcolm Construction Services had a difference of opinion with Amec on 14 items and came to adjudication. The adjudicator, Janey Milligan, ordered £140,000 to be paid to Malcolm. After consideration, she found “that SMM7 [the standard method of measurement] does not apply to the parties’ contract. Now then is that a big “D” or little “d”?

Let’s take this slowly. Exactly what adjudication is intended to cover is entirely a matter for the claiming party. It will be in the notice of adjudication. It defines the nature, extent and limits of the issues that the referring party seeks to have determined. It can pick and choose. It can be one discrete issue or several issues within a broad question, such as the final account. It can ask the meaning of a clause. It can ask what day the bricks were delivered if that’s an issue. 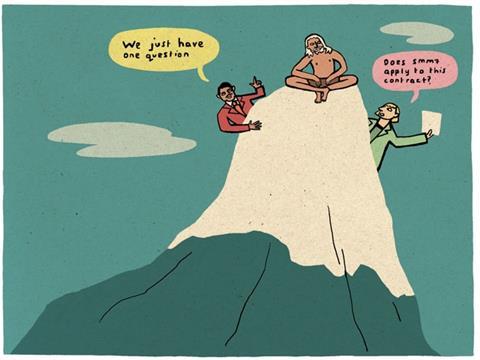 The binding part of the award is the decision on the issue or questions in the notice of adjudication - that is, what redress was requested

But, and this is important, the judge said that the opposing argument did not become part of the dispute referred. The opposing party can advance its reasons why the claimant is not entitled to the redress it seeks but the reasons, even if accepted by the adjudicator, do not expand the referred dispute. So the reasons in the decision are all well and good but they are not binding on any subsequent adjudicator.

Let’s put it this way: the binding part of the award is the decision on the issue or questions in the notice of adjudication - that is, what redress was requested. The views of the adjudicator, the opinion, the basis for the requested redress is not binding. Indeed, it is frequently the case that the adjudicator is not required to give “reasons” at all. They can simply answer the issues put, the redress required in the notice of adjudication. That’s the part which binds.

Mnd you, there is no reason why either party here could not bring a simple one-question adjudication: “Does SMM7 apply to this contract?” The answer then binds all subsequent adjudicators on this project. In fact, the great way to use adjudication is to bring neat, simple one-at-a-time questions.

This article was originally published under the headline: It’s our very own D-Day