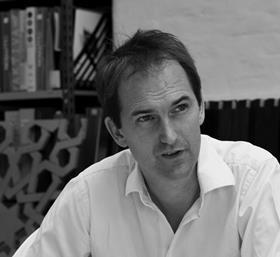 We have recently returned from Brazil. Regardless of the World Cup, Olympics and Paralympics, it is a country that is undergoing extraordinary industrial and social change, which has the happy propensity to create more wonder than blunder.

We spent one afternoon with a developer in Niterói, across the Guanabara Bay from Rio de Janeiro. As you do in Brazil, rather than meeting in an office, we met outside where we were introduced to the local ice creams and the Niemeyer Way: a promenade of his typically gestural buildings that culminate in his masterpiece, the Museum of Contemporary Art.

The wonder was discovering that this is in fact set above the most beautiful and quiet beach and against the Rio skyline. Nothing really prepares you for this. It is simply stunning, like something from the pages of science fiction. The story goes that Niemeyer was asked to pick his own site by the mayor and that it was designed on a tablecloth over lunch. The poor landowner was apparently duped into selling this site on the basis that planning regulations would not allow any other development to occur here.

My blunder is Niemeyer’s Museum of Cinema on the same seaside walk, which has sadly never opened since it was completed in 2007. The shell was built for five screen halls and a film archive, but a bridge to Rio and the draw of home entertainment have seen the number of local cinemas fall dramatically.

Its sweeping form, stairs and ramp are typical Niemeyer, but so is the lack of any passive environmental strategy. The fully glazed elevation makes it unbearably hot without the introduction of air conditioning. But Niterói is a fast-growing suburb and I wonder how long it will be before they find a new use for the cinema? 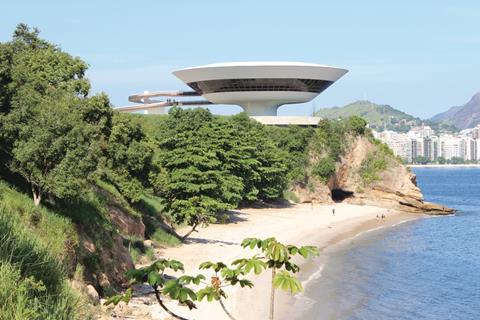 The Niterói Contemporary Art Museum is situated in the city of Niterói, Rio de Janeiro, and is one of the city’s main landmarks. Designed by Oscar Niemeyer with the assistance of structural engineer Bruno Contarini, it was completed in 1996. 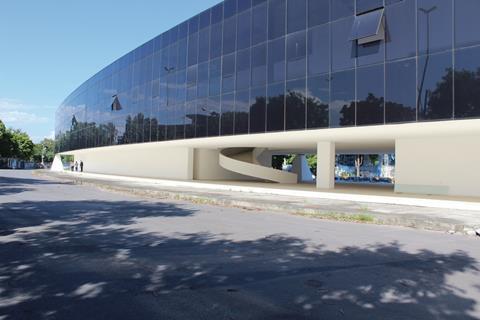 The Museum of Cinema Petrobras is one of a set of seven buildings on Niemeyer Way, started in 1997. The opening was planned for 2007, but the centre ended up being very little used - indeed, the Jornal do Brasil reported that the building had been “handed over to the cockroaches” .