Niggles and moans seem to be this week’s theme. From a grumpy Phil Spencer, to a deputy mayor just too sick to make a Monday morning meeting. I, however, have been a ray of sunshine as usual

Extra! Extra! Read all about it

Eagle-eyed readers of the Guardian website on Thursday may have noticed one of construction’s well known faces, Hanif Kara, director of UK engineer AKT, rubbing shoulders with pop icon Madonna on the front page. Such is the glamourous life of jet-setting engineers, it appears. However, unfortunately for Kara, the story was all about management failings at the Material Girl’s proposed £10m school in Malawi, which has been abandoned despite £2.4m being spent on consultants. Neither Kara or AKT, which had been engaged on the project, were mentioned in the piece and there’s no sense the firm has done anything wrong. So all publicity is good publicity?

Keen to find out how things are progressing on the vast Wembley City scheme, I recently sent along a couple of my spies to the topping out ceremony of a new student accommodation block there. But alas, on arrival at the allotted hour, the time-honoured ritual was already over. Nevertheless, my minions were treated to a bird’s eye view of the development and learned that the student block is slap bang next to a new five-star hotel. How would you feel if you had to pay thousands of pounds a year only to have to bed down next to hotel guests paying a fraction of the fee?

No rest for the RICS

One often wonders whether presidents of the RICS are laying the ground for a well earned retirement, having capped off a career in the private sector with a stint wearing a hefty gold chain around their necks. Not so, my spies tell me, for Robert Peto, current president. Peto is planning to get stuck back in to property after his time ends, so I hear - with DTZ. He is currently vice chairman of capital markets there, so a return to his former stomping grounds shouldn’t be too much of a transition. Retirement is for wimps.

Far be it for Hansom to pour scorn on the ambitions of a young and hopeful entrepreneur, but in some cases it’s important to speak out when you can see someone
making a fool of themselves. So it is with the young businessman who approached one of my hacks this month at an industry conference to talk about making schools out of shipping containers. We may be entering a brave new world of standardisation, but teaching times tables in echoey, corrugated boxes synonymous with people trafficking may be one “value for money” drive too far.

When deputy mayor of London, Sir Simon Milton, summoned journalists to City Hall on Monday this week to talk about the capital’s new enterprise zone in Newham, I duly trundled along to hear all the details. More fool me. Sir Simon failed to turn up. Apparently his office had neglected to tell anyone that he was sick and an embarrassed press officer was left simply to send everyone home again. We’re sure this is no representation of the scrupulously well-organised way in which mayor Johnson runs the capital.

Rejoice! This year marks the tenth anniversary of both the Federation of Master Builders’ Master Builder of the Year Awards and Channel Four’s hit TV show Location, Location, Location. The awards were appropriately presented therefore by none other than Location, Location, Location presenter Phil Spencer. But if Spencer’s speech was anything to go by, he may be lacking the fortitude to last another decade. Spencer congratulated the industry for the saintly patience builders must possess to deal with difficult homeowners … their neighbours … their eccentric demands … feeding their cats … the list of gripes went on. Does Kirsty have to put up with all this whinging? 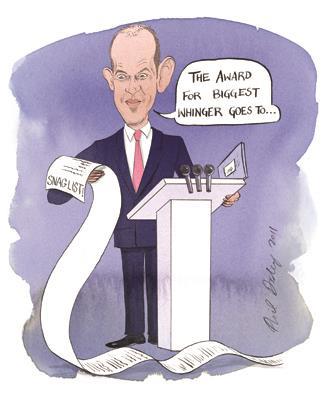