The JTP architectural assistant on his crowded desktop, foreign adventures and what he would buy if he won the bingo 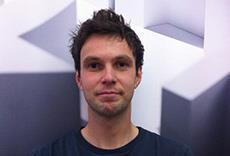 BBC News or Google Maps – just love planning those adventures and exploring places that I will never get to see.

Putting files on my desk top. It can be quite a backdrop sometimes and has often been referred to as a “doozy”.

I had a Blackberry and then converted to iPhone, for me iPhones are easier to use. I am a  bit of technophobe. When I discover something new on it it’s like Christmas everyday.

I was a late bloomer to Facebook and only used it to keep in contact with friends living overseas. I haven’t used LinkedIn or Twitter yet, but never say never. I think LinkdIn will be more useful for me.

Plane App (PF Free); just the novelty of seeing where the plane is going and where it is from and wishing I was on that plane. It is great to see people’s reactions in the street when you are holding your phone up in the air.

Text, I like to keep things short. Email too – it gives me time to think.

A boat ticket to Bilbao I try and avoid flying where possible; it makes the adventure more fun and find you tend to interact with more people than you would on a plane where you are herded on and sit in solitude.

I have a PC although I would love a Mac. Maybe when I win the bingo.

Song For Zulu, by Phosphorescent – a friend from Vienna introduced me to this song a couple of weeks ago. Although I tend to ruin songs I play too often.

Pavane by Gabriel Fauré – this helps me relax, especially at the moment with the studio working at full capacity. It also reminds me of World Cup 98.

Such a Funny Night by Aphrodite’s Child – I was brought up on 60’s music from my mother. I tend to borrow her records but never return them.