The project manager: A hero of our times

Old hands in construction will tell you they had never heard of project managers when they were whippersnappers. Come to think of it, I’d never seen one until the early nineties,
when the GC/Works/1 contract dreamed the fellow up. Blowed if I knew what they were doing that was different. To me, they did the usual certifying and nosing about,
as well as being a nuisance. They was merely the contract administrator, doing the employer’s contractual stuff; no different to the contractual stuff done by the architect
or engineer.

Nowadays the project manager has grown umpteen arms and legs and wings and things. They seem to be everywhere. Some say they are a “co-ordinator and guardian of the client’s interests”. Some say they should go to hell. Some say they represent all that is wrong with the building process … and I say they are vital.

Vital? Yes. That’s because time after time the procurement process for building projects goes off half cock. The project manager is the lifeguard saving architects, engineers and bricklayers from the tide of inefficiency.There are two types of project manager. One is the unpopular contractual rules operator. Typical of that role is the project manager in the NEC suite of contracts. They can be a former architect, engineer, surveyor or builder - a migrant from other professions. They fancy being a sort of contractual document expert. They have a tendency to throw their weight about. They’re the sort of bloke that the main contractor would dearly wish cleared off his site. Instead, they want a site office, chair and desk, on which is a copy of the NEC3. Well thumbed. He doesn’t understand any of it. Doesn’t matter. Nobody else does, either.

The project manager is a crack-filler, sometimes a gap-filler, even a canyon filler. He is the one who saves the procurement process from disaster

The other type of project manager is a crack-filler, sometimes a gap-filler, even a canyon-filler. He is the one who saves the procurement process from disaster. The role here is very different from the contract administrator role. The bad habit that seems to be entrenched in UK construction is to pretend that the job at tender stage is designed, drawn, detailed and specified. Then we all pretend the bids are for the project on the drawings. But none of that is true.

The “successful” contractor then sets foot on site and we all pretend they can be left alone to dig and build. More likely, within days of “making a start” they will find the drawings lack information or want work or they will be handed a “change order”. Ah, but what of the lifeguard project manager? Their role is to warn the client that there is an iceberg in the offing. Warn them the contractor is about to play merry hell and send in a bill for delays. 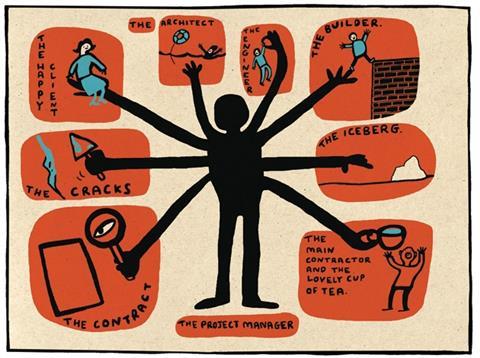 The project manager, the type who is more than a contract-wallah, has the role of looking after the employer. Their job is to programme the flow of information between designers so that the contractor knows what to price for at tender stage. Or, at worst, get the final requirements into the contractor’s hands when they are on site so they can plan ahead. This project manager has huge responsibility. He has to foresee trouble, and he has to run around to avoid that trouble.

Look, the position is simple. The bad habit is to start the project and begin to build when the architect and engineer are still fathoming out the details. The bad habit is that the employer starts the job with the half-baked idea that they can make up their mind as they go. And the job of the project manager is to hit the roof about these bad habits. The very title “project manager” gives the game away. Lack of pukka detail causes delay, cash, costs. The project manager has to warn the whole of the employer’s team of their folly. Change orders, variations, new instructions cause delay, cash, costs. Damn it, we take them for granted and they are the very heart of so many disputes and grievances! The project manager is vital; their job is to stop all that.

There is more. Their job is to manage funding, planning, statutory controls, think sustainably, weigh who shall be in the design team, who shall be invited to bid for the work and who shall win the contract. The role is to make the main contractor’s job a piece of cake. Fancy it? It’s all yours.
Tony Bingham is a barrister and arbitrator at 3 Paper Buildings Temple