Kamran Moazami is the man behind some of the most famous high-rise buildings in the world. The WSP director spoke about leaving Iran, taking on Manhattan and helping the British learn to love the skyscraper 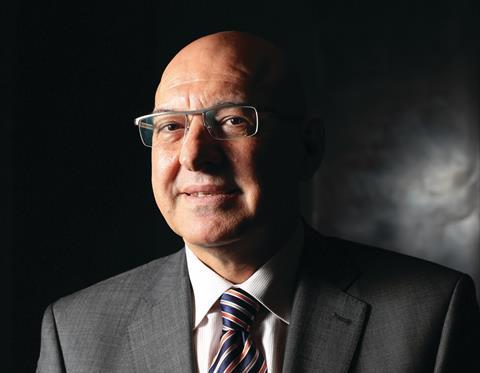 Here’s a question. What connects the Shard with the London Guildhall School of Music and Drama? Or the Manchester Hilton with 7 World Trade Centre in New York? Or, for that matter, One Blackfriars in London with the Burj Khalifa in Dubai?

Yes, they are all high-rise developments, but the link in each case is the chief engineer. Kamran Moazami, director at engineering consultant WSP, can safely be said to get about a bit. Having cut his teeth in the canyons of New York, Moazami has for the last 17 years applied his knowledge of sky-high development largely in the UK.

An engaging individual with a near-permanent smile, Moazami comes across as a cultured man with a great affinity for urban life. He is also a champion for his profession and talks earnestly about the lengths to which his firm goes to train graduates and enthuse them about the rewards of a career in engineering.

They should find plenty to inspire them in Moazami’s own back catalogue - for which he was awarded the International Association for Bridge and Structural Engineering’s Milne Medal last week. But why has he dedicated his life to high-rise development? And how different does he find working on tall buildings in the UK to New York?

Moazami’s path towards being one of the world’s most prolific and respected skyscraper engineers was at least partly accidental. Born and 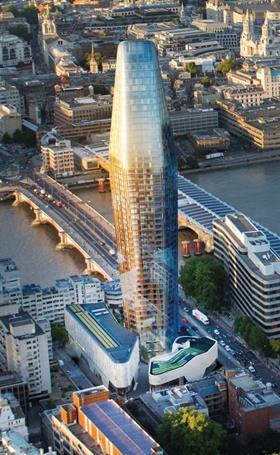 One Blackfriars, being built by St George, will provide a mix of residential, commercial and retail properties

raised in Iran, in 1975 he went to New York to train as an engineer, gaining first a bachelor’s degree and then, on a scholarship, his master’s from Columbia University. “At the time Iran was booming in construction,” he says. “It was a great thing to go and get an engineering degree from an American university and then go back and have a great life - nightclubs, fantastic beaches. You had it made if you had an education.”
So the plan was to go home, but then geopolitics intervened. “The [Iranian] revolution had just taken place and I wanted to go back to help the country to become better,” says Moazami. “But then the Iran/Iraq war happened. I called my father and said, ‘What can I do?’ And he said, ‘Go back to school and get your PhD.’”

Moazami did indeed sign up for the PhD, but a professor suggested that instead he should go out to work and provided an introduction to consultancy Leroy Calendar PC. A successful interview followed and his career in consultancy has grown from there.

Moazami’s formative years were spent at New York firm Cantor Seinuk, where he worked on a series of prestigious tall buildings. After a spell in London working on Canary Wharf between 1989 and 1992, Moazami returned to New York, only to return to London in 1996, having persuaded Cantor Seinuk’s founders that investing in a new office would pay off. At that time the company was squarely focused on New York and the idea of opening a London office wasn’t greeted with enthusiasm. However, he won the argument and WSP acquired the firm in 2000. Since then, Moazami’s London career has gone from strength to strength, with a CV boasting some of the most famous tall buildings on both sides of the pond.

It is often said that the US looks down on the UK construction’s ability when it comes to skyscrapers and, given his background, Moazami is better placed than most to comment. “I don’t think that has ever been the case,” he says. “They have a lot of respect in America for Brits - they love Brits. They work very well together. They have a lot of respect for British engineers.”

London demands exceptional projects and unique projects. That’s what attracted me here. I didn’t want to do boring square buildings in New York

However, Moazami does believe that a plague of poorly designed tall buildings, constructed largely in the seventies, led to an instinctive dislike for high-rise development among UK planners and the public alike. This led to a lack of experience among UK engineers and created an opportunity for Moazami and » » his colleagues. “In the US my company has done so many tall buildings so when we came here it was very unique because we had the experience,” he says.

“A lot of it is not about engineering, it’s about gut feeling. When I look at a job I could easily say what will make it work without running any numbers because I’ve done it so many times that it gives me that intuition. That’s what gives Americans the edge on tall buildings.”

Our historic distaste for tall buildings also creates a challenge for architects and engineers: if they’re going to stand a chance of winning planning permission, they have to be good - really good. And it is clear that this is key to Moazami’s passion for working in the UK, and in London in particular.

“The Shard is probably the best building in the world,” he says. “And in a sense, London demands exceptional projects and unique projects. That’s something that attracted me to here. I didn’t want to do boring square buildings in New York. I knew that I would have the opportunity to work with amazing architects and do work that is exceptional.”

Moazami clearly believes that the British are coming round to tall buildings - partly due to the realisation that, if successful global cities are to continue to grow, there is only one way to go. “Cities like London, Paris and New York - these are the cities where people want to live,” he says.

“And it’s wrong to spread the city. It’s expensive, with the transport and the infrastructure. So the
natural solution is to go up.”

This is an argument that Moazami applies not just to cities hemmed in by water, such as New York, or greenbelt legislation, such as London, but 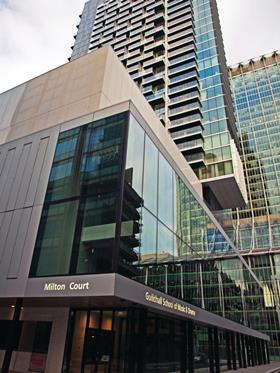 to the burgeoning metropolises of the Middle East, located largely in areas where space is not an issue. “They have space but if you look at it it’s still better [to build up],” he says. “If you have a space on a desert, what are you going to look at? At least if you go up you’re creating something special. You’re also condensing your transportation issues, you’re condensing your infrastructure issues.”

And that’s not to mention providing a vital economic stimulus. Moazami believes that high-density development has a key part to play in the revival of both London and the UK’s other major urban centres. “London Bridge station wasn’t prime space before the Shard, but it’s totally different now,” he says. “If you went to Canary Wharf in 1989 it was a dump. But now it is amazing. It’s the regeneration of the whole depressed area. Now it’s glamourous, it’s fantastic. You go back to an area and see how it’s been transformed and it’s very rewarding.”

Moazami believes that, after five years in a state of suspended animation, London is limbering up for the next generation of major commercial projects, which considering his place at the top of the supply chain he is well placed to observe. “Everybody is looking at commercial and it’s about time,” he says. “We’ve finished the Place [at London Bridge] and that building is fully let. We’ve just finished another building in Canary Wharf and it’s taken. There’s a lot of speculation and I’m hoping that soon you’ll hear that a whole bunch of floors at the Shard have been taken.”

So now that plans are being dusted off and a new crop of towers are on their way, will engineers like Moazami eventually step out of the shadows and take their place in the sun alongside their colleagues in architecture? “We’re not good at marketing,” he says. “We don’t tell people that the reason this building is here is because of our science and engineering helping the architect to achieve it. Engineers are so down to earth that they don’t go out there and publicise what they do.”

This, says Moazami, is a shame, because without gifted engineers there would be no great architecture to celebrate. “It’s the science and engineering that makes one building better than another,” he says, before embarking on a characteristically cultural metaphor. “The architect is the conductor, but you have a trumpeter who’s one of the best in the world and is actually making it so special. But it’s the conductor who gets the applause. It’s the nature of the business.”

“The Barclays Bank HQ [One Churchill Place in Canary Wharf] was really a very special building for me post-9/11. So 9/11 happened and the next day Barclays said that they didn’t want to be in a tall building. So we studied the building and worked on the structure and how to reinforce the building without creating a fortress.

“That job really changed how we looked at buildings. You can put a large-diameter hole through that building and it won’t come down. It was the first job where we went outside of typical engineering practice.”

“I saw a picture of the Shard with St Paul’s and people were criticising it. St Paul’s is a gift to us from past generations and the Shard is a gift from us to future generations. It’s something for us to leave behind. I don’t quite understand what the problem is.”

“Planners come up with all sorts of ideas not to regenerate an area. I’ll give you an example: One Blackfriars. It’s a fantastic building. It’s gorgeous. But they objected to it and that project actually brought down [developer] Beetham. It broke their back. Now it’s being built by St George and they’ve realised that it’s a great thing. So why create the issue?”