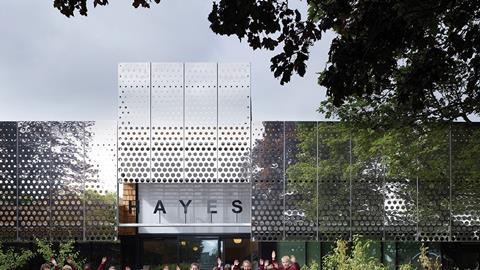 Now that we might be building primary schools again, what are the costs?

The Education Funding Agency has recently released the first batches of the £1.75bn privately financed schools programme, although the privately financed element has shrunk to £700m. In addition to this, the government did announce in May new capital funding of £300m.

Regardless of how these schools are funded, they will be released to the market in batches, with the first OJEU for the £122m Hertfordshire, Luton and Reading batch of seven schools due in June. Each of the geographically located batches will comprise a mixture of secondary and primary schools.

During the days of the Building Schools for the Future (BSF) programme, primary schools were treated as the poor cousin to their more profitable and architecturally interesting secondary school relations. The £1.1bn Primary Capital Programme bore little relation to the more glamorous £55bn BSF programme, was in some cases rolled up into the BSF LEP, then quietly drifted away under the coalition government, its passing barely noticed behind the hubbub surrounding the cancellation of the BSF programme.

The stated aims of the Primary Capital Programme were to make additional funding available to enable local authorities to rebuild or take out of use the worst 5% of primary school buildings and to significantly improve at least half of all primary schools. Local authorities were encouraged to take a strategic approach to rebuilding, refurbishing or remodelling their primary schools to bring them up to 21st-century standards.

The Education Funding Agency has developed a series of “baseline designs”. In total there are 14 baseline designs, six of them being primary schools. These range from a 105-place school with a 26 place nursery, through to a two-storey 630-place primary school. In the face of significant criticism from architects and educationalists among others, the Education Funding Agency has been at pains to state that baseline designs are purely illustrative of how the reduced space standards could be configured, and that it is up to individual design teams and contractors to develop their own designs.

With the seemingly unending increase in birthrates, it is time that Primary schools move beyond the sticking plaster approach of portacabins and are instead provided with permanent, flexible, fit for purpose facilities that schools and pupils are proud of.

The chart below shows the sharp increase in public funded schools work that occurred in 2009 and 2010 as the previous government pumped money into public sector building work to boost the economy. It also shows the equally sharp fall in activity that has characterised the sector since the end of 2011. Nevertheless, at the beginning of 2013, the amount being spent on publicly funded schools and colleges was still higher than all the years prior to 2008, despite the drop in prices that the industry has experienced since then.

It also shows that the height of privately funded education construction was 2006-8 when over £900m per quarter was being spent on schools and universities; since 2010 this figure has stabilised at a little under £600m per quarter.

The Spring 2013 Construction Industry Forecasts from the Construction Products Association (below) expects the trend of the last two years to continue. Following a 17% reduction (in constant price terms) in 2012, education construction activity in 2013 is expected to fall a further 10% before stabilising and showing minor growth in 2016-17. 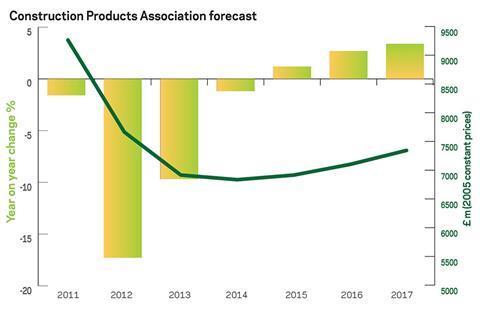 The main design issues currently being addressed for schools in general (both primary and secondary) are to adapt to the new Priority School Building Programme OutputSpecification published by the Education Funding Agency, which is essentially replacing Building Bulletins previously used as guidance for school design, in particular acoustics and environmental design. The major driver is to provide naturally cross-ventilated energy efficient teaching spaces which perform acoustically with good natural daylighting.

Many contractor framework bidders have developed an affordable “kit of parts” approach to structural frame and building service provision which allows for flexible adaptation on individual sites that can be tailored for specific teaching pedagogies.

The “kit of parts” approach, often using standardised off-site manufactured components, allows spatial layouts for individual schools to follow the Baseline Design templates being published by the EFA (the latest batch of which have recently been published).

With the new PF2 procurement about to get under way, another layer of design criteria, including energy in use monitoring, with penalties imposed for buildings that exceed set targets, are also focusing the minds of environmental consultants. Only time will tell whether building to these new standards will be more successful than those that went before.

With the serious shortfall in pupil places in so many regions around the country, the provision of temporary classrooms on a short to medium-term basis is no longer seen as a viable solution, writes Simon Cash.

Using their own and central government funds, local authorities are looking to new-build projects to provide a permanent and future-proofed response.
Given the pressure on funding, the key to a successful project is a clear brief and design that, when tested, is seen to be affordable and can be delivered to the desired programme. The link between the two is procurement. Without the right procurement route and robust procurement documents, it is easy for ambiguities, contradictions and loopholes to creep in that could lead to escalation of costs, delays and ultimately disputes. There are many issues that arise through the procurement process. So, what are the challenges?

Even before a project is confirmed, options appraisals have to be carried out to establish which sites can be developed, or which existing schools are best suited for expansion. Due to the limited funds that local authorities have, these appraisals are often carried out using limited information, relying on assumptions.

With the appraisals over, new design teams are procured to develop the feasibility into a scheme that can be used to procure contractors. However, no two designers will have the same approach to developing solutions and the new team will invariably look at yet another alternative, taking the scheme back to first principles again. Both the procurement of a new design team and revisiting options uses valuable time in what is, more often than not, a tight programme.

Engaging designers to develop options appraisals, but with a break clause in the event that the scheme is not taken forward would save considerable time, which can be used to benefit the project elsewhere. Of course, continuity of design team avoids the need for taking a backward step when good work has already been carried out.

Further challenges arise from basing options appraisals on assumptions, when schemes are taken forward, surveys and investigations are carried out, or planners are consulted. The resulting information and feedback may throw up problems that would have led to an alternative solution had they been known at the time.

The impact is a squeeze on both costs and designs, to make sure the project works. This often also leads to a squeeze on the brief, which dilutes the school’s expectations of what they are getting from the project and leads to a testing relationship between school, local authority and consultant.

Therefore, it would be better to put more value and effort into the options appraisals to better inform the viability of the scheme, which will facilitate development of the design and selection of a robust procurement strategy further down the line.

Being risk averse, local authorities look to transfer as much risk to the contractor as possible. From the contractor’s point of view, they need to be able to quantify that risk, to allow them to make due allowance for whatever they have to assume responsibility. So, a more equitable way of approaching this thorny subject is to draw up a risk transfer schedule that identifies all the known risks and what information is available to the tenderers to allow then to make an informed decision on the commercial offer they make. Where it is considered that the information available is insufficient to evaluate the risk, the suggestion should be that the risk remains on the client side and put into the risk register. This will then inform the level of contingency that needs to be held out of the overall budget.

The decision whether to follow a traditional or design-and-build route will often be dictated by programme needs or the desire to transfer risk to the contractor. The problem that contractors find with design and build is that many schemes are being taken to a level of design that does not give them the flexibility of applying their expertise in detailing designs to add value to the project. Where schemes are taken through to RIBA stage E or F, the level of detail is virtually to the standard of a traditionally procured project. On the other hand, where designs are tendered at RIBA stage C or D, the Employer’s Requirements do not adequately detail those aspects of the brief or design that are non-negotiable. This can lead to tensions between designers and contractors, with contractors’ proposals being rejected and arguments as to what the contractor should or should not be providing.

One way to strike a balance is to establish a schedule of non-negotiables as part of the briefing process and as the design develops. This schedule then forms part of the Employer’s Requirements and, where appropriate, the design is taken to a level of detail that allows the design team to be prescriptive.

For other elements of the scheme the design is only taken to a level that will allow the contractor the ability to offer best value, without compromising the overall project and brief.

In addition to the above, the development of detailed room data sheets for accommodation can go a long way to conveying the brief and are an easy reference document that all can refer to in the event that there is a question over the provisions within a specific space.

Invariably, school expansion projects need to be delivered by the start of the new academic year. This means that there can be several projects running in parallel, with tight timescales. Developing a realistic programme that everyone signs up to is a challenge, and the area that most often gets squeezed is the procurement of the contractor. However, in reality this is the time that will have the most critical bearing on the outcome of the project. Inadequate time for preparation and proper review of tender documents, short tender periods, insufficient time given to evaluate tenders, and a lack of appreciation of the time the local authorities’ decision making process takes, all result in contracts being awarded late against programmes.

This puts pressure on the construction phase and the contractor ends up taking on the risk for fear of losing the contract. A well-considered procurement programme that gives time to properly review documentation will highlight any weaknesses that can be addressed prior to getting into contract.

Simon Cash is director of cost management at Artelia UK 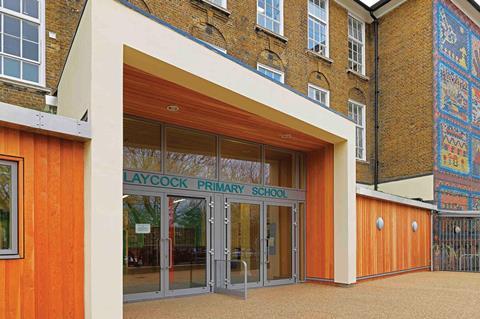 The featured school is a typical example of the new “low cost” family of schools, and is loosely based on the Education Funding Agency’s baseline design for a 630 place primary school with nursery spaces over 4000m2 gross floor area.

It is constructed on a greenfield site, and is formed by a structural steel frame to maximise future flexibility and adaptability, shrouded with a thermally insulated and rendered block wall. Internally it consists of skimmed and painted double layer plasterboard partition walls, with tiled finished to WC areas.

Flooring is concrete screed, with a finish of tiles, carpets and sports flooring. Underfloor heating is supplied through a high efficiency gas fired boiler. BREEAM rating is “excellent”. The cost model does not include external works or abnormal costs, as these will be site dependent. The construction period will be in the order of 56 weeks. 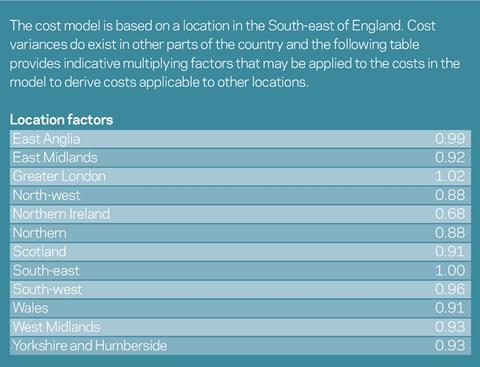 We would also like to acknowledgement Gary Chesher of Aecom and Peter Fordham of Davis Langdon, an Aecom company, for their contributions.