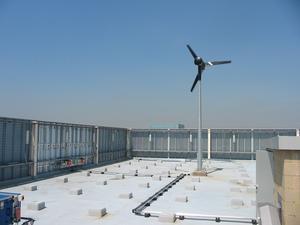 In this month’s engineering services cost model, Davis Langdon Mott Green Wall presents a round-up of the principal options for renewable energy and where they can be best installed

In recognition of the likely causes and effects of global climate change, the UK is committed to meet number of global, European and national environmental targets. These targets aim to reduce the detrimental effect this country has on the environment through its energy consumption. One way of meeting these targets is to reduce energy consumption by taking energy efficiency measures, but another, increasingly prominent strategy is the use of more renewable energy in place of that derived from fossil fuels.

On a global level, the Kyoto protocol was signed by the UK and 140 other nations in 1992. This committed the signatories to reducing their emission of greenhouse gases, taking 1990 as the base year. However, the UK is also bound by European and UK regulations that operate in conjunction with Kyoto.

The first phase of the European Union’s emission trading scheme came into effect in January this year and covers the power sector, along with high-energy users such as oil refineries, metal processing, and the mineral and paper pulp industries. All such companies in the 25 EU member states must limit their CO2 emissions to allocated levels in line with Kyoto. The principles of the scheme are that participating organisations can:

In the UK, the Utilities Act (2000) requires power suppliers to provide some electricity from renewables. This requirement started at 3% in 2003 and will rise to 15% by 2015. In a similar way to EU’s emission trading scheme, generating companies receive and can trade renewables obligation certificates for the qualifying electricity that they generate. For small renewable generators, renewable energy

guarantee of origin certificates have been introduced, in units of 1 kWh.

The initial focus of the legislation is on CO2, and the goals set by the UK government are:

However, last year, four years after the introduction of the legislation, it was estimated that less than 3% of UK electricity was being generated from renewable sources. As a result, the government felt a change in policy was required, and the ODPM published Planning Policy Statement 22: Renewable Energy in December to promote renewable energy through regional and local planning authorities.

More than 100 local authorities have already embraced PPS 22 and its companion guide by adopting pro-renewables planning policies and others are expected to follow. The typical requirement imposed by the local authorities is that 10% of a site’s electricity or heat must be derived from renewable sources, but at least one authority has already raised the bar to 15%. The London Plan states: “The mayor will and boroughs should require major developments to show how the development would generate a proportion of the site’s electricity or heat from renewables.”

In order to aid, and ensure, compliance with the EU and UK regulations, there are a number of measures in place. For example, the EU Directive on the Energy Performance of Buildings requires that energy performance certificates must be prominently placed on all buildings open to the public and commercial buildings built, sold or let from January 2006. This alerts prospective purchasers and tenants to a building’s energy performance.

As a result, assessing the carbon emissions associated with the operation of buildings is now an important part of the overall early design process for planning approval.

Methods for doing this have therefore been incorporated into:

On-site renewable energy sources are taken into account, but developers are not allowed to rely on green tariffs as part of an assessment.

With such requirements pushing the use of renewable energy it is important to be aware of the options available – and where these can most appropriately be used.

In a suitable location, wind energy can be an effective source of renewable power generation. Even without grant aid, an installed cost range of £2500 to £5000 per kW of generator capacity has been established over the past few years. The most common arrangement is a machine with three blades on a horizontal axis, all mounted on a tower or, increasingly for small generators in inner-city areas, on top of a building. Average site wind speeds of 4 m/s can produce useful amounts of energy from a small generator up to about 3 kW, but larger generators require at least 7 m/s. A small increase in average site wind speed will produce a large increase in the output power. There is a need for inverters, synchronising equipment and metering for a grid connection.

Third party provision through an energy service company can be successful for larger installations located with or close to the host building, especially in industrial settings where there may be fewer aesthetic or noise issues than in inner city or residential areas. The energy service company provides funding, installs and operates the plant, and the client signs up for the renewable electrical energy at a fixed price for a period of time.

Photovoltaic materials, commonly known as solar cells, generate direct current electrical power when exposed to light. Solar cells are constructed from semiconducting materials that absorb solar radiation; electrons are displaced within the material, thus starting a flow of current through an external connected circuit. Conversion efficiency of solar energy to electrical power is improving with advances in technology and ranges from 7% to 18% under laboratory conditions. In practice, however, allowing for typical UK weather conditions, an installation of at least 7 m2 of the latest high-efficiency hybrid modules is needed to produce 1000 watts peak (1 kWp), yielding perhaps 800 kWh in a year. Installed costs range from £300 to £450 per m2 for roof covering, and from £850 to £1300 per m2 for laminated glass.

The ground temperature remains fairly constant throughout the year and heat can be extracted by circulating a fluid (normally water) through a system of pipes and into a heat exchanger. An electrically driven heat pump is then used to raise the fluid temperature through the compression cycle, and hot water is delivered to the building load as if from a normal boiler, albeit at a lower temperature.

Most ground heat systems consist of a cluster of pipes inserted into vertical holes typically 50 to 100 m deep depending on space and ground type. Costs for the drilling operation vary according to location, site access and ground conditions. A geological investigation may be needed minimise the risk of failure and to improve cost certainty.

Such systems can achieve a coefficient of performance (heat output to electrical energy input) of between three and four, achieving good savings of energy compared with conventional fossil fuels. Installed costs are in the region of £800 to £1200/kW depending on system size and complexity.

The constant ground temperature is well below ambient air temperature during the summer, so coolth can be extracted and used to replace or, more likely commercially, to supplement conventional building cooling systems. Such borehole systems may be either open – discharging ground water to river or sewer after passing it through a heat exchanger – or closed – circulating a fluid,often water, through a heat exchanger and vertical pipes extending below the water table.

Ground source heating and cooling systems are only partial renewable energy, however, because they rely on electrical power, mainly for pumping. But considerable carbon savings can be justifiably claimed by avoiding the use of fossil fuel for heating and electrical power to drive conventional chillers. Indicative system costs are from £200 to £250/kW.

Simple flat-plate water-based collector panels have been used successfully on south-facing roofs over many years in the UK – especially by DIY enthusiasts prepared to devise their own simple control systems. The basic principle is to collect heat from the sun and circulate it to pre-heat space heating or domestic hot water, in either a separate tank or a twin coil hot water cylinder. Purpose-designed, evacuated tube collectors have been developed to increase performance and a typical 4 m2 installed residential system has a costs £2500 to £4000 depending on pipe runs and complexity. Such systems produce a saving of about 2000 kWh in energy use a year. Commercial systems are larger and slightly more complex but achieve similar performance: these could be used in low-density residential, retail and leisure schemes with washrooms and showers as they have adequate demand for hot water.

Wood chips or pellets derived from waste, farmed coppices or forests are available commercially and are considered carbon neutral, having absorbed carbon dioxide during growth. With a suitable fuel storage hopper and automatic screw drive and controls, biomass boilers can replace conventional boilers with little technical or aesthetic impact. They do, however, depend on a viable source of fuel, and there is a requirement for ash removal/disposal as well as periodic de-coking. In individual dwellings, space may be a problem because a biomass boiler does not integrate readily into a typical modern kitchen.

Biomass boilers are available in a wide range of domestic and commercial sizes. For a large installation, they are more likely to form part of a modular system rather than displacing conventional boilers entirely. There is a cost premium for the biomass storage and feed system, and the cost of the fuel is currently comparable with other solid fuels. As an addition to a conventional system, installed costs could range from £200 to £250/kW.

Conventional combined heat and power installations consist of either an internal combustion engine or a gas turbine driving an alternator, with maximum recovery of heat, particularly from the exhaust system. For best efficiency, there needs to be a convenient and constant requirement for the output heat energy, and the generated electricity should also be used locally, with any excess exported to the national grid.

Unless a source of fuel is available from landfill gas, or from a local biomass digester, then an on-site biomass to gas conversion plant is needed to fuel the CHP engine. Considering the cost implications for biomass storage and handling as described for boilers, it appears that biomass CHP will only be viable in specific circumstances, with installed system costs in the order of £2500 to £3000/kW (electrical).

It can be difficult to compare the potential energy savings of renewable options on a particular project – and how that translates into CO2. The table above provides some idea, showing the potential saving per £100,000 of renewable investment (£100,000 is the notional “extra over” cost of introducing renewable energy). And it is worth getting clued up as renewable energy is definitely here to stay.