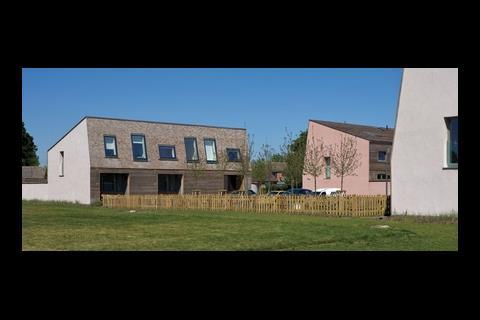 Clay Field social housing in Suffolk, which was built using hemp and lime 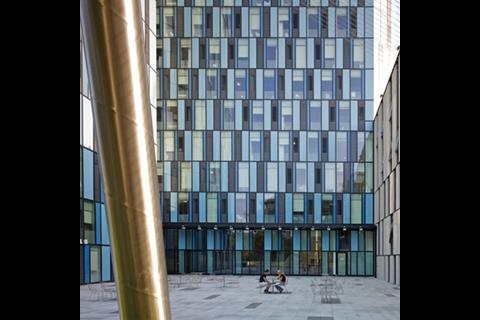 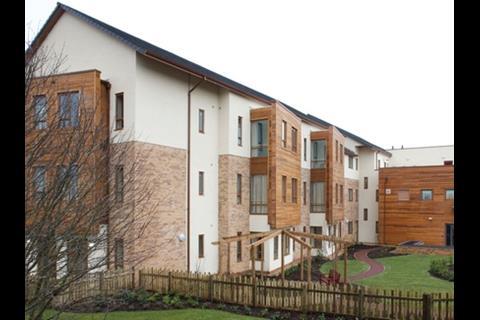 The Belong Wigan nursing care village for the elderly 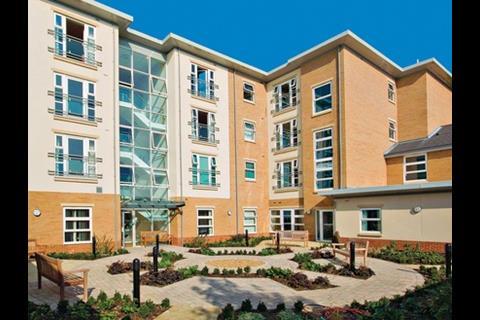 Max Wilkes of Davis Langdon revisits affordable homes, extra-care homes and nursing homes to find out what effect changes in regulations and tender price deflation have had on the sums

In the past year new orders have declined rapidly, and tender prices have followed them down. Every updated forecast seems to deepen the gloom a little more; for example the Building Cost Information Service’s (BCIS) tender price forecast for this year was amended from –9.5% to –11.6%. However, it has so far maintained its forecast of a fall of –2.8% for the 12 months to the fourth quarter of next year.

Davis Langdon’s tender price index has also been revised recently. This shows a 15% fall from the top of the market, which was reached in the second quarter of last year. In contrast to the BCIS, we predict that prices will fall about 6% during 2010.

In the 12 months to June 2008, new-build construction output fell 14%. The autumn 2009 forecast from the Construction Products Association (CPA) suggested that this trend will continue to the end of the year; it predicted an overall fall of 15% in new-build output during 2009.

The steepening fall in output has been driven by a worse than expected performance by the industrial and commercial sectors. However, there are some sectors that seem to be bucking the trend, with the Office for National Statistics reporting rising orders for public sector housing in the three months to August. Similarly, infrastructure and public non-residential also remain strong.

However, owing to the structural deficit in the government’s finances, cuts in public sector spending are likely to begin as early as next year. Overall, it remains to be seen how the cuts will affect large-scale strategic programmes in education and the health sector, but investment in public housing has been brought forward as part of the government’s 2009 stimulus package, so investment here will definitely fall after 2010.

According to the BCIS and the CPA, new-build output is likely to fall again in 2010 although at a slower rate. The BCIS forecasts another fall of 2% between quarter three last year and quarter three this year before growth returns in 2011.

The recession has, of course, influenced prices for construction obtained in competitive tenders. Comparing recent bids with tenders received in the fourth quarter of 2008, the median price of a half-brick wall has fallen 11%. In situ concrete has slipped 20%, and both A252 reinforcement mesh and 140mm blockwork has reduced 23%. The cost of fabricated universal steel sections has fallen furthest, with the rate, including erection, down by more than 25%. Across the board, building rates have dropped on average by 19%.

Not all projects are procured using competitive tenders, but even when clients and contractors are sticking to agreed frameworks, the effects of falling workload and pressures on cash flow will be felt widely.

It is expected that the large continental European countries will grow in the third quarter, whereas emerging economies such as China and India have avoided recession, with annualised growth rates of 7.9% and 6.1% respectively. Commodity prices are either holding their own or rising steadily, as is the case with crude oil which is now trading at $75 dollars a barrel against this year’s low of $34. As a result, the prices of raw materials and energy have continued to rise, which may eventually translate into material price inflation in the UK. Currency devaluation is also back in the news, with Sterling losing more than 10% of value against the euro since July. This may eventually affect the asking price for imported goods

Market conditions in the UK remain grim and tender prices are not expected to increase before 2011. Tenders are commonly being submitted with preliminaries priced at 8-12%. Contractors are accepting low profit margins, and in some cases directors’ adjustments are also being applied. Clients should continue to allow for the greater likelihood of variations, claims or subcontractor failure on projects tendered on low margins. Therefore in line with our previous mini-cost model update (24 April, page 56), a 5% contingency allowance has been included.

02 / Changes to design standards for housing

It is expected that by 2011, all new homes in the affordable sector will be required to meet level four of the Code for Sustainable Homes by 2010. This updated cost model reflects this by including several changes in the specifications. Also, public sector-funded housing must meet the Lifetime Homes standards by 2011.

The change in the code coincides with changes to Part F of the Building Regulations, affecting ventilation, and Part L, dealing with energy efficiency. The consultation period for revisions to these parts ended in September 2009.

In housing, the main approaches to meeting the more stringent Part L requirements are seen as:

Cost drivers associated with meeting level four of the Code for Sustainable Homes include:

The additional costs for the changes are estimated by the communities department to be about £60-70/m2 at 2008 prices, depending on the scheme.

The lack of private housing investment has hindered the flow of mixed developments and projects part funded by section 106 agreements. The worst affected areas are London and the South-east, whereas Scotland and the West Midlands have had an increase in project starts.

Funding for Affordable Housing in England is channelled by the Homes and Communities Agency (HCA). The aim is provide £1.5bn between 2008 and 2011 for affordable and private housing through the National Affordable Housing Programme (NAHP).

Affordable housing also formed part of the government’s stimulus package; this was done by allowing local authorities to spend rental income on housing development, rather than returning it for central distribution. Additionally, £460m has been brought forward for expenditure under the Local Authority New Build Scheme (LANB). Under these measures the NAHP aims to deliver 39,500 rented homes and a further 13,000 low-cost ownership homes. The LANB programme has the target of delivering 3,900 units. On top of this, the Kickstart programme aims to provide 6,000 rented and low-cost ownership homes.

The HCA is establishing a system encouraging institutional investors to build and manage social and “intermediate” housing. Investment from pension funds and other institutions could be used to build these types of homes, potentially using less grant funding than RSLs usually require.

The cost model is based on a new-build scheme with a mix of two and three-bedroom houses located in the West Midlands. The buildings are timber frame with a reinforced insitu concrete ground slab, brick external wall and concrete tiles on timber roof trusses. The softwood doors and windows are painted and internal subdivision is by loadbearing timber stud partition.

In addition to changes in rates to reflect market conditions, we have changed what goes in to the cost model to meet increasing levels of specification. The cost of additional thermal and sound insulation, a solar hot water system, a mechanical ventilation and heat recovery system and additional data and power wiring are included, and add up to a net increase of £52/m2, once the savings due to energy efficiency are taken into account. This is equivalent to 5% of building-only costs. The costs for the minor additional works required to meet the Lifetime Homes standard are included in the general rates.

Specialist housing is the term used to cover development providing residential care for elderly people and those with special requirements. The sector provides a specialist service at the residential care end of housing provision for the elderly; it is suitable for those people who need more care than is provided by extra care homes. Nursing homes have many functions, ranging from caring for the infirm and providing a supportive home for dementia patients to dealing with disabilities related to accidents and illnesses.

It is government policy to move a patients from hospitals to these smaller specialised units, so an increasing range of facilities are needed to care for them. However, the number of nursing homes and places for elderly frail people have fallen. The reasons include:

The recession has meant that developers and providers have had to respond to falling revenues. Some operators are using more non-residential staff, and future homes may have less communal space such as dining rooms and lounges. Similarly, the shop or hair salon could be dispensed with.

Clients are expected to demand more two-bedroom units and more storage space, which could lead to larger units, with greater development costs.

When standalone, these homes are usually larger, generally with more than 60 beds. This cost model is based on a 16 bedroom extension to a home in the West Midlands including kitchenettes and dayrooms. Some demolition and alteration work is involved. The construction uses a facing brick cavity wall on strip footings and precast concrete floors. The roof is made from concrete tiles on softwood trusses, windows are PVCu and blockwork internal walls. Services include gas-fired heating with low surface temperature radiators, lighting and nurse call alarms. These are fed from the existing building and are lower than could be expected.

There are a number of schemes and proposals in place to provide capacity in this sector. The Department of Health has made £80m available to local authorities and their housing partners between 2008 and 2010 to provide extra-care housing units. This funding is being distributed through a bidding process allocating £40m in 2008/09 and another £40m in 2009/10.

For a typical standalone extra-care home, the number of flats would start at 40. The cost model for this extra-care building is located in the West Midlands and is made up of 16 self-contained flats, 10 single bedroom homes and six two-bedroom homes. These take the form of a three-storey wing to a care home.

The scheme is developed to housing association standards and also has a cafe with kitchen, lounge and staff rooms. It is built using a facing brick cavity wall on strip footings with reinforced concrete insitu floors. The roof is made of concrete tiles on softwood trusses. Windows are softwood and internal division is based on metal stud partitions. Services include gas-fired heating with low surface temperature radiators, lightings and nurse call alarms.

The cost models are priced at West Midlands rates and exclude enabling and external works and external services. The costs of non-fixed furniture and fittings, VAT and professional fees are also omitted. Unit rates should be adjusted for programme, procurement route, location and site conditions.

The following adjustments for locations should be made from the corresponding table below.