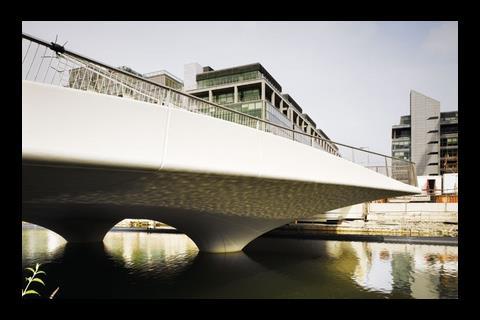 This bridge at Spencer Dock in Dublin was designed by Amanda Levete Architects. There are fears that, due to cuts in the National Development Plan, many proposed infrastructure schemes will be delayed or cancelled 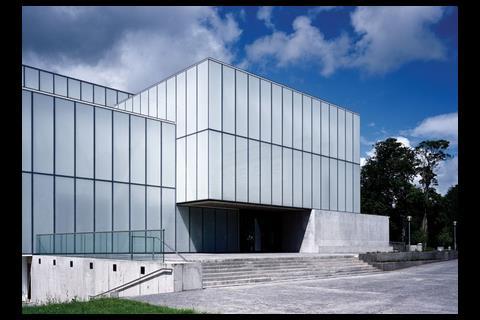 Ireland’s reliance on the property boom has seen it in a bad way since the economic crisis began, says Richard Fitzpatrick of EC Harris in Dublin. But can government action prompt a return to stability?

Ireland has been more affected by the global recession than most other European countries. The Budget introduced on the 9 December was the second this year, and included a number of austerity measures aimed to rescue the economy.

The Budget also included measures to reduce spending on public services by almost €1bn (£900m) in 2010, compared with the pre-Budget estimates, with savings to be made through “efficiencies” rather than reductions in services, although how that will pan out remains to be seen.

Twelve months on from the collapse of Lehman Brothers, the country is still reeling. The government is borrowing €400m (£360m) a week to meet public sector costs, and GNP is expected to contract 7.5% in 2009 and 2.3% in 2010, so Ireland faces a tough future.

This economic decline suggests that the once dependable infrastructure projects that underpinned the National Development Plan (NDP) are likely to be delayed or, in some cases, cancelled; as a result, it is expected that NDP capital expenditure will turn out to have fallen almost 20% in 2009.

According to recent government forecasts, transport projects will be the worst affected, with a 24% fall in investment. In 2008, the government spent almost €1bn (£900m) on public transport programmes; in 2009, this figure is expected to drop to €628m (£565m). The need to reduce public spending in 2010 by some €4bn will have a big impact on spending and key projects, such as the Railway Procurement Agency’s Metro North and Irish Rail’s DART Underground. The emphasis on capital expenditure during the economic good times has now shifted towards optimising investment in operating and maintening buildings.

In a reaction to the December Budget, the president of the Society of Chartered Surveyors called for the government to manage the unprecedented decline of the construction industry and said that, “a cut of €960m (£865m) in investment projects will compound a further increase in unemployment within the construction industry, where 100,000 jobs are already at risk in the first half of 2010 as a number of major infrastructure projects reach completion”.

For several years the construction industry has been at the forefront of economic growth in Ireland, but it is now clear that that was unsustainable. The changes in the global economy resulting from the collapse in the financial sector and the subsequent impact on availability of credit, combined with the fulfilment of demand, has had a marked impact on the speed of decline in the sector.

This change is likely to be extremely difficult for many construction firms; indeed, 342 have been declared insolvent in the past 12 months. Direct employment in construction peaked in 2007 at 282,600 (13.2% of the Irish workforce). Current figures show employment at 257,300, and this is expected to fall to 190,000 by the end of 2009. The loss of almost 100,000 directly employed jobs has lead in turn to the decline in the industries that support the construction sector, such as architects, surveyors, accountants and lawyers.

Total construction output accounted for 21% of GNP in 2002, and reached a high of 25% in 2006. The figure now stands at 19-20% and is predicted that to fall to about 18% at the end of 2009. The figures represent a substantial loss, although the construction industry output is still large by European standards. As Ireland goes through recession, the value of its GNP will fall and this will offset the decline in the relative value of the industry.

During the days of the Celtic tiger economy, there was enormous demand for commercial real estate, in particular office and retail facilities, and the output of the private commercial sector peaked in 2007 at €4.7bn (£4.2bn). As supply is now equal to demand, and developers find it difficult to secure funding to complete schemes, the volume of commercial output has diminished and it is estimated that the sector’s output for 2009 will be less than €2bn (£1.8bn).

Few commentators are willing to predict when financial liquidity and confidence will return, but it is unlikely that financial stability will be restored before the middle of this year.

In response to the near failure of the financial sector, the Irish government announced the creation of the National Asset Management Agency (NAMA) last April.

This company will take on banks’ toxic property debts (but will not be taking deposits from the public and will not have a banking licence). The idea is that NAMA will buy the land and property development loans of the six Irish banks that are covered by state guarantees. The potential value of the loans is in the order of €77bn (£69bn), which have been bought at a discounted value of €54bn (£49bn). By taking problem property loans off the hands of the banks, the government intends to put the financial institutions in a position where they can resume lending and create liquidity.

However, it could be 12-18 months before the benefits of NAMA materialise and the agency is likely to exist for 10 to 15 years to manage the toxic debt, so the move is not a short-term fix.

Once established, NAMA will have varying types of loans on its books, based on physical assets; some of these will undoubtedly be of better quality than others. The loans will be a mix of “good or performing” loans and “bad or non-performing” ones. Whether NAMA is seen as just a taxpayer bailout for the developers and the banks, or as a real proposition that will kickstart economic growth, only time will tell.

The Report of the Special Group on Public Service Numbers and Expenditure Programmes (An Bord Snip Nua) recommends major changes within the public sector and, if implemented, will have an impact on construction education and training. This has already been affected by a fall in the number of applicants for construction-related courses, as they seek what are perceived to be more stable career paths. The effect on labour supply may not be immediate but is forecast to be evident from 2011 onwards, when construction sector growth is expected to return.

There will also be a significant requirement for technical training courses for construction workers. This will ensure that the workforce is skilled, mobile and able to adapt to the changing economic conditions while maintaining output.

The industry has, in the past few years, benefited from new skills brought by migrant workers. This opening of the market has removed many of the skills shortages that the industry experienced. However, as investment migrates to those accession countries in Europe, such as Poland and Romania, there is the potential that the expertise developed in the Irish construction market could also migrate, which would result in a skills shortage when the economy picks up. This concern is underpinned by the fact that 53% of construction professionals have lost their jobs since mid-2007 and have had to look abroad for opportunities, resulting in a concern about the future availability of experienced QSs and civil engineers.

Tender prices for the construction industry have fallen back to 1999 levels, according to new figures from the Society of Chartered Surveyors.

The data shows that the dramatic falls in construction tender prices recorded in the second half of last year had accelerated through 2009. According to the latest surveys, tender prices fell 10.5% during the first six months of the year and have decreased by 17.3% over the past 12 months; they are now 23% below the peak they reached in the first half of 2007.

The fall in prices has been caused by a decline in workload in all sectors. As contractors and subcontractors bid for work in an ever diminishing market, large numbers of them will either cease to exist or the level of post-contract claims and arbitration proceedings will increase. In this environment it is essential that employers receive the best advice on the procuring contractors and, above all, it is important to look beyond the lowest tender price.

The reduction in tender prices has been mirrored in the commodities market with common materials showing declines, although not to the same extent. This suggests that firms are cutting staff and salaries in response to falling revenue.

With construction workload continuing to fall, and contractors anxious to secure workload, tender prices can be expected to drop over the next 12 months; a fall in the order of 5-8% is to be expected in 2010.

Workload in the infrastructure sector may fare a little better but tender prices there are still likely to be competitive.

As estimated construction job losses (direct and indirect) are likely to be just short of 200,000 by the year’s end, and overall unemployment close to 300,000, the government must prioritise projects that will create employment and growth.

Investment in public infrastructure and utilities creates a return and improves the competitiveness of the economy, while laying the foundations for an upturn.

When the liquidity issue in the financial sector is addressed, private investors will have confidence in the market and support major projects requiring private funds. The government needs to address the price it pays for the public sector, which is putting considerable pressure on exchequer funds, and the implementation of December’s Budget will be necessary to achieve this.

It should be noted, however, that while the Irish economy is expected to recover quickly once the required measures are in place, this is not anticipated until the last quarter of 2010.