In the wake of the credit crunch of 2008, a number of commercial property investments in Poland were suspended or aborted. This had a knock-on effect on the whole market.

Residential and office developments suffered a significant fall in activity, dictated primarily by the huge fall in demand and the reduced optimism of potential buyers.

Retail and logistic developers also suffered, although here the main cause was the shortage of finance. A number of projects were stopped in their tracks and those that required refinancing only secured deals in late 2010.

Poland joined the EU in 2004 and in the first years after accession, secure workloads meant the contracting sector was quite prosperous. In early 2009, however, construction prices stabilised and then fell, leading to a more competitive market.

The downturn led contractors to focus on the public sector and seek new ideas for securing contracts. Until recently, almost all public sector construction contracts were selected on price - much to the detriment of quality and certainty of completion. However, contractors’ experience and qualifications are beginning to play a role in the shortlisting procedures. Those who have not previously worked in the sector are enjoying the certainty of payment that comes with it, while acquiring valuable experience on infrastructure, public buildings and sports facilities.

Many factors contributed to the relatively good state of the Polish economy during the global downturn, but the main one was the inflow of EU funding and public investment in infrastructure. Both consultants and contractors started looking towards infrastructure as an alternative source of income, with the latter showing growing interest in public-private partnership models.

In the second part of 2010 the property market began to revive. Banks showed a gradually increasing appetite for lending and there has been more activity in centrally driven, complex developments such as the regeneration of railway stations and regional airports and the building of maritime facilities.

The Euro 2012 football championship is another source of activity because Poland is building or refurbishing five major stadiums.

There are increasing signs of an end to the crisis in the construction market. In the commercial sector, mutual and investment funds are showing interest in buying finished projects and are looking at more innovative ways of conducting the transactions.

This activity is translating into a higher number of due diligence commissions on commercial schemes - existing, planned and those under construction. It is also means there is renewed interest in commercial developments, including entire portfolios of properties such as offices, shopping centres and logistics facilities. This applies not only to the main cities but to secondary ones too.

The next step will be the resumption of halted projects and possibly the development of new ones. This will mainly affect the office market in Warsaw, where the vacancy rate is gradually falling. Recovery is also evident in the residential sector, where, after a period of stagnation, sales have increased since the second quarter 2010.

As noted in the overview, Poland has been able to take advantage of large injections of funds that have been directed mainly towards infrastructure improvement projects, and this sector has created most of the construction workload.

This investment is mainly in roads; in the rail sector investment is less visible because of delays in the preparation processes by the rail authorities.

Poland is co-hosting the European Football Championship, Euro 2012, with the Ukraine, and this has been the driver for construction of new stadiums in the five host cities of Warsaw, Poznan, Gdansk, Katowice and Wroclaw while the stadium in Krakow will serve as a reserve stadium and training centre.

Special regulations were passed to allow faster planning and administrative procedures for all the Euro 2012-related projects, including not only stadiums but infrastructure, hotels and airports.

International investors have traditionally put all central and eastern European (CEE) markets in one basket, but the events of recent years prove this approach should be revisited.

Neither local currency nor internal markets behave the same in every country of the region. There is a big difference between smaller markets such as those of the Baltic States, which depend heavily on foreign investment, and larger ones such as Poland where there is a strong domestic market and a diversified export industry.

Such diversification offers some protection from the effects of a downturn in one particular sector. By comparison, Slovakia’s manufacturing industry was focused to a great extent on automotive products.

After an almost complete freeze on investment since the credit crunch, in the second half of 2010 institutional investors showed increased interest in acquiring commercial properties.
While this is far from the kind of gold rush experienced three or four years ago, it is a sign of regained confidence in the CEE market. Because of the limited supply of built assets on the market, investors are starting to consider different forms of forward purchase and are even willing to take on some development risk as joint venture partners. This is a real change of attitude.

Bank financing of developments remains scarce and comes with much more demanding conditions on investors in terms of equity and pre-lease levels. As a result, joint venture arrangements are becoming more and more evident. 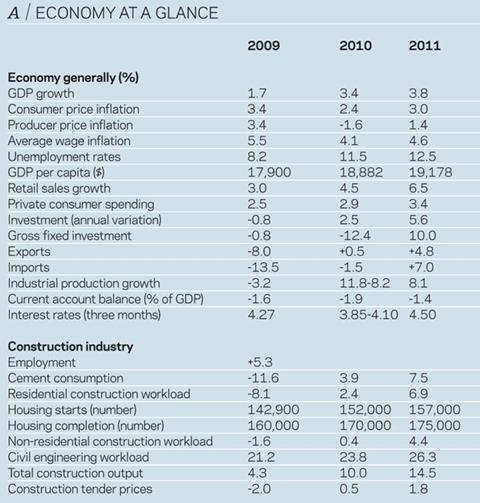 A / Economy at a glance

During the credit crunch, shrinking demand sent contractors looking for a better mix of clients, including the public sector.

Construction of sports facilities for Euro 2012 and the inflow of EU funds, primarily for infrastructure projects, created a number of opportunities.

These large contracts attracted a number of international construction companies to Poland. Some of these entered the market on the back of one project and built up their capabilities locally.

Roads remain top of the list for most contractors as they represent the biggest investment prospects. These projects are procured not only by the GDDKiA (the national highway authority) but also by local and regional authorities.

Investment has also (finally) come to the secondary cities where international and local investors have seen the potential of commercial developments such as shopping centres.
Infrastructure-driven projects also have an influence on commercial schemes. Two of the largest multi-use developments are located at train stations in Katowice, capital of the largest “voivodeship” or administrative district in the south of Poland; and Poznan, the capital of Wielkopolska region in the western part of the country. 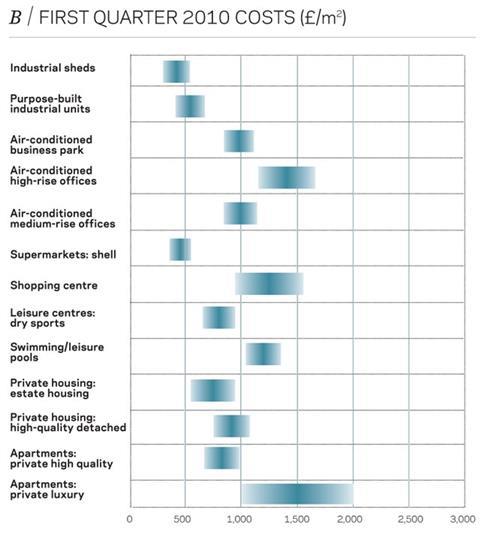 The Polish banking market previously had a tight control over debts generally, so the sector experienced significantly less toxic debts than its international parent companies and their other subsidiaries in western Europe.

Nevertheless almost all banks have considerably tightened procedures for security credits. On commercial projects, banks are now expecting a higher ratio of pre-lease agreements signed before closing the loan.

Risk reduction and risk management have become more prominent criteria in banks’ procedures. Major projects tend to be financed by consortiums of banks rather than individual institutions.

Another source of financing is the international institutions that specialise in infrastructure or special purpose projects. Banks such as EBRD or EIB are playing a more and more significant role on the investment market, and are contributing to the general level of economic activity.

The downturn ensured that material prices and wages in the construction industry stabilised and became more competitive, with a knock-on effect on tender prices.

A further result was the reversal of the outflow of workers from Poland to western Europe, mainly to the UK and Ireland. Many are now returning. Medium-size Polish building companies have stopped looking for work abroad and are focusing on the domestic market, offering competitive rates.

This has created healthy competition for the international firms, which dominated the market before the credit crunch. Polish medium-size companies are increasingly joining consortiums and bidding for big projects against the construction giants.

Another result of the downturn is a healthy change in the quality of workmanship, client care and warranties offered to investors; subcontractors are visibly more diligent.

In the supply chain, it is encouraging to see that firms which started up an innovative process, opened a prefabrication plant, specialised in production of a sophisticated structures or mastered a traditional element of a building are still in demand.

At the beginning of 2009 there was a price war between contractors and in 2010 this led to the situation where they were tendering at a loss in order to maintain workflow, keep key people and maintain their capability.

This situation was exacerbated by the fact that price was the main factor in the awarding of public projects. The full consequences of entering into contracts at up to 50% below the budget price are still to come, but will very likely take the form of incomplete projects and claims for cost and time from contractors.

Where the main criterion for the award of contracts is the lowest price, certainty of completion remains in doubt. This is true not just for tenders for contractors, but for consulting services and project management.

The other problem with the award of contracts solely on price is the likelihood of a drastic deterioration in the quality of professional services.

If this trend continues it is likely to affect the growing interest of Chinese construction companies in entering the Polish market. While these companies as yet have only limited knowledge of the formal procedures of Polish and European markets, their low resource costs increase their chances of winning significant contracts when competing on the basis of the lowest price.