Investment opportunities are rife in Saudi Arabia at the moment, thanks to a growing economy and population. Colin Morris from EC Harris, reports

The current unrest in Middle East and North Africa makes profiling any country in the region with complete accuracy very difficult, however, as other regimes topple, it seems unlikely Saudi Arabia will follow quite so dramatically. Last month the monarch, King Abdullah, returned from three month’s abroad having had an operation and announced a $36bn social welfare package which was a welcome demonstration of the government taking some positive action. It should be noted that the research used in this article was carried out prior to the unrest in the region.

Saudi Arabia is seeking $500bn in investment opportunities in transportation, energy and education according to a recent report by Bloomberg in ArabianBusiness.com. Meanwhile Saudi Arabia’s business confidence index rose 1.1% in the first quarter of 2011, to the highest level in more than a year, according to a report by Banque Saudi Fransi.

The investment opportunities are being spurred on by economic and population growth which has led to numerous planned mega-projects across the Kingdom of Saudi Arabia (KSA), according to the Saudi Arabian General Investment Authority (SAGIA), the state-run body that promotes investments. Analysts from Business Monitor International (BMI) believe that even if the capital for the planned infrastructure projects is not forthcoming from the private sector, they are likely to be pushed through anyway as KSA has the capital itself.

The Bloomberg report goes on to say that the Kingdom also wants to attract $100bn in investment to expand airports, ports, railway networks and logistic hubs, and $100bn for its knowledge based industries, including education, health life science and information technology. Saudi Arabia expects its economy to expand by 3.5% over the next year as the country benefits from higher crude prices.

The construction sector is the third largest sector of the Saudi economy, after hydrocarbons and ICT, and has experienced rapid growth in recent years. Non-residential construction accounts for 67% of the construction industry’s value, while residential construction accounts for a third. The Saudi Arabian construction industry grew at a nominal Compound Annual Growth Rate (CAGR) of 10% between 2003 and 2008. This slowed down to growth of 4.7% in 2009, and 7% growth is expected during 2010 (10.4% of GDP) adding some $17.1bn to the economy, according to another BMI report. Analysts are predicting an average of 4.1% growth between 2010 and 2014, figures which they consider to be strong but not booming.

One of the strongest sectors going forward will be the housing sector as the government plans to invest heavily in affordable housing to meet a severe housing deficit. The kingdom will need 1.5 million new homes by 2015, according to the Oxford Business Group. With about 60% of the population below the age of 40, Saudi Arabia’s infrastructure and residential plans are in response to actual, sustainable demand from a native population rather than reliant on expatriates or the tourism sector, unlike many countries in the region.

Current planned projects for KSA amount to $322.9bn, which makes it the largest construction and infrastructure market in the MENA (Middle East and Northern African) region. However, despite the huge potential, non-Saudi contractors continue to find it difficult to break into the market and only 22% of construction companies currently in KSA are foreign according to a recent Merrill Lynch report.
According to Engineering News Record, none of the 10 largest contractors operating in the Middle East Region are KSA based and there are believed to be fewer international contractors currently in the market looking for joint venture opportunities. The historical focus of the KSA construction industry has been on the process and infrastructure markets; as a result local contractors have a strong background in large-scale project and programme delivery, often involving joint-venture partners.

To keep pace with the demand for housing, a leading Saudi developer has appealed for more foreign contractors to invest in the
kingdom’s construction industry. The concern is that the expected 200,000 new units a year cannot be developed by the local contractors alone.
The Merrill Lynch report goes on to say that one regional contractor looking to reduce it’s exposure to continued downturn in the Dubai market is Arabtec. Arabtec Saudi Arabia announced in October2010 that it had received an order from Saudi Binladen Group to construct 5,000 villas in a deal worth $1.33bn. Arabtec has also previously secured a deal to construct 46 buildings at the Princess Noura University project in Riyadh.

Construction currently provides employment for 2.5 million workers in KSA, accounting for 40.4% of the workforce, up 1.5% from 2009.

The Saudi economy grew by a very healthy 3.7% in 2010. The economy benefited from a mammoth counter-cyclical stimulus package which left KSA running a budget deficit of 3.3% of GDP last year for the first time since 2002, and the country is expected to post a small deficit in 2010.
The country has a high level of inflation at 6.1%, the highest in the Gulf region, but economists are not seeing an inflationary spiral and higher prices are not leading to higher wages. However this is considered an uncomfortable situation which cannot be sustained in the long run.

The 6.1% inflation rate is driven by higher commodities and a speculative boom in the Saudi land market according to ArabianBusiness.com and the expectations are that inflation will have fallen to a (still high) level of 5.4% by the end of 2010, falling further to 5.1% in 2011 and to 4.7% by the end of 2012. The forecast is based on an assumption that sharply rising commodity price pressures will start to stabilise soon, and that there will be no new pressures on the housing market.

However, a majority of business lenders (57% of those surveyed) expect the inflation rate to rise in the next six months while 14.5% expect it to remain the same. A recent survey indicates that about 55% of those surveyed planned to keep their prices for goods and services the same during 4Q10 and 1Q11 while only 20% intended to increase their prices.

The Saudi government’s response to inflation is complicated by the fact that the Riyal is pegged to the US dollar; as a result domestic interest rates cannot be raised in response to high levels of inflation while a withdrawal of government stimulus would damage the overall economy, as well as damaging jobs.

“If credit growth accelerates dramatically, then the Saudis will definitely put a hold on credit growth, and then you will see a policy dilemma and you may
even see some speculation”, said Farouk Soussa, a Citi’s chief economist for the Middle East.

About 80% of materials used on construction projects in the KSA are typically sourced from within the kingdom. However, prices tend to be related to world demand and wider patterns of trading, and the moves towards a recovery in world markets has resulted in commodity prices showing huge volatility over the past year. Steel prices in particular have showed big monthly variations with a peak in prices in March 2010 followed by substantial falls over succeeding months.

Aluminium and copper prices have both shown substantial increases over the second half of 2010 with aluminium prices up by 22% and copper prices ended the year 24% higher than in January at a record price of over $9,000 per tonne, with much of the rise happening in the second half of the year. Increases in the price of copper will, of course, have a substantial impact on the installed cost of mechanical and electrical engineering installations. These increases are bound to filter through to higher subcontractor prices for service installations.

Cement prices in the UAE fell over the past year and are now 17% down on a year earlier. The construction industry’s fortunes in the KSA, however, are very different to those of the UAE and cement prices in Saudi Arabia increased by 10% in the last three quarters of 2010.

Looking ahead we can expect to see an increased level of government and private sector investment in construction. There is a huge demand for new residential properties in the country and with demand coming mainly from the indigenous population, rather than an expatriate community, that demand looks to be fairly assured into the future. Further opportunities are available in transportation, energy and education and even if investors are not interested, the government will almost certainly push these plans through.

Although development plans are well advanced, the ability to deliver could be a problem. Saudi Arabia does not readily attract overseas firms and for many foreign professionals the country is still considered a hardship posting. There are a number of difficulties for foreign firms trying to break into the Saudi market and it could be that the ability to deliver could be an issue which casts a dampener on growth and may stifle the expected surge in construction.

It would make sound economy sense if KSA looked to take advantage of the professional availability while much of the rest of the region suffers from the continued finance restrictions. If the right steps are not taken, 2013/2014 could see the start of a expatriate professional brain drain to easier parts of the region. 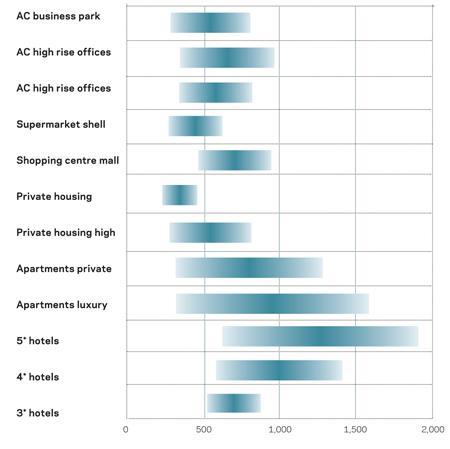 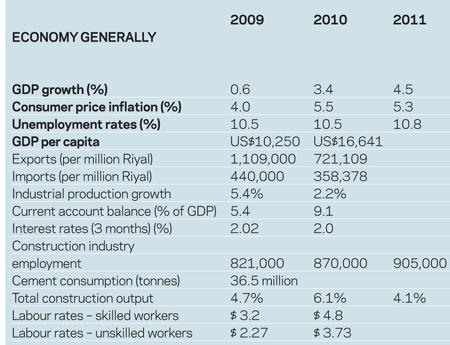