Country focus: The US

As the US economy grows in strength and demand for buildings increases, the office and retail sectors are likely to be the first to experience a tangible improvement

US GDP increased at an annual rate of 1.8% in the first quarter of 2011, according to advanced figures released by the US Bureau of Economic Analysis. The figure indicated a slowdown in economic recovery following strong growth in 2010 and rises of 2.6% and 3.1% in the third and fourth quarters of 2010 respectively. The US economy has now shown seven straight quarters of growth from the property driven recession of 2008.

Durable-goods manufacturing and the retail trade were among the leading contributors to the upturn in US economic growth in 2010 and recovery was widespread, with 20 out of 22 industry groups contributing to real GDP growth.

According to information provider, McGraw-Hill Construction, total construction on an unadjusted basis during the first three months of 2011 was reported at $88bn, down 10% from the same period a year ago; the figure was unchanged from the previous quarter. Looking at a breakdown of the latest monthly figures, residential construction figures in March 2011 fell by 17% compared with March 2010, while non-residential fell by 14% with non-building construction (infrastructure) showing no change.

Given the above figures, many pundits believe that the US economy is at a psychological tipping point where certain key individuals or trendsetters adopt behaviour that others follow - this creates a demand for a product that can suddenly explode as it rises in popularity. The experts suggest that this can happen with economic recovery specifically with employment growth, often shifting from weak to strong within a short period of time. Businesses are generally cautious during a recession. However, at
some point in the early stages of a recovery, this cautious approach tends to shift rapidly. Demand for labour increases as businesses begin to hire and they go from being worried about losses or weak demand to being worried about the possibility of losing sales and missing out on potential profits. The sudden shift creates a rapid acceleration in employment growth, which then generates higher income growth and leads to a sharp acceleration in economic activity. 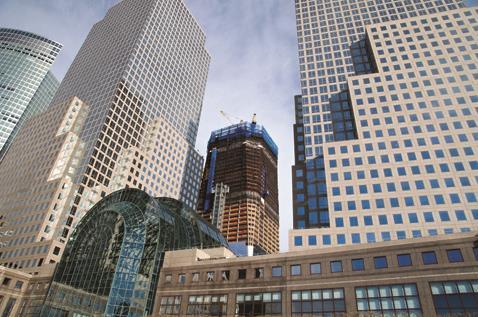 The economy has been stagnant for two years, and pundits suggest that it is on a knife edge. They maintain that the trend is about to change and we should see some economic growth during 2011 for the following reasons: 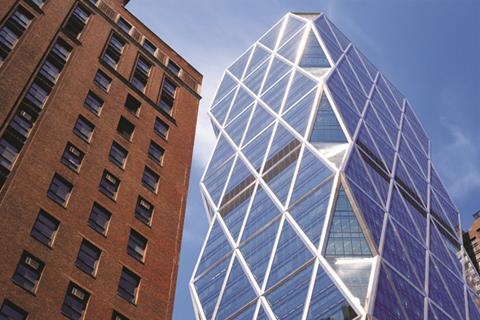 The impact on the real estate market can be significant when there is a shift in employment. With growth forecast, the market can expect significant benefits, particularly in the office, industrial, retail and multi-family sectors.

Office markets are likely to improve substantially. With jobs on the up, the demand for office space should increase and central business district data suggests vacant office space is declining in Q1 2011.

For the first time in many years, American manufacturing is doing better than the rest of the economy. Manufacturing output fell by 15% between December 2007 and June 2009, but has since recovered two-thirds of that drop and production is now just 5% below its peak level. Factory employment has been slower to recover than output, since productivity has risen. Nonetheless, that too is growing with manufacturing employment up by 1.6% compared with last year; total employment rose just 1% over the same period.

Housing and car sales have typically led previous recoveries, but this time both have been held back by tight credit conditions and heavy household debt. Meanwhile business investment, typically a laggard, is rising because of tax incentives and because firms had delayed replacing ageing equipment for so long.

Improvements in the industrial markets are likely to be moderate. While there is still a significant vacancy rate in the US, it is expected that demand for new build will increase rapidly particularly in areas where there has been little or no new construction over earlier years.

The retail sector is likely to rise. The employment growth projected for 2011 comes in an environment of accelerating economic activity. Consumer spending is expected to rise from 2.7% in Q4 2010 to 3.9% at the end of this year, leading to improvement in retail markets. A recovery in demand for retail space is anticipated in the coming year largely due to strengthening consumer demand.

Rental rates on commercial offices are likely to stabilise in 2011 and may begin to rise, particularly in markets that are tighter than the national average. Overall, 2011 is likely to mark a turning point for rents in the US commercial real estate market for the nation as a whole.

International investments remain at a high. Money is continuing to flow into the US economy, particularly from the Asian markets. EC Harris is experiencing increased inquiries for due diligence from Chinese investors, who see the US market as a projected hot spot and growth area in the next five years. There are still many distressed properties and projects available on the market, which have been neglected over the last few years and require major remodelling. As buyers come to the market, this will fuel the demand for construction. The larger Asian funds are also still looking for deals in the hot commercial real estate markets, especially in New York - despite some economic uncertainty, this region remains buoyant.

The economic stimulus package injected into the US economy has seen mixed results within the industry. Certain sectors have seen an increase in demand, particularly green energy. The reliance on imported oil has been a political talking point and the government aims to reduce this need for imported energy and to lead the US to be self reliant by 2020. Consequently, there has been a surge in alternative forms of energy and their construction.

The residential sector remains depressed with property prices in some locations up to 60% below the peak they reached in 2006; nationally about 23% of homeowners owe more on their mortgage than their property is worth. The S&P/Case-Shiller index of home prices in 20 American cities fell by 3.3% in the year to February after reaching an all-time low in January.

Following on from the financial crisis within the banking sector, we are now seeing the major banks starting to revisit projects that were shelved prior to this crisis. The banks are number crunching and the signs are that markets in which the banks do not normally invest are opening up.

In addition the banks are looking at their own property portfolios and seeking advice, with particular emphasis on their asset registers.

EC Harris has received a number of enquiries from the banks for assistance with compiling portfolios at the same time as preparing life cycle costs for the properties. Since typical life cycles are 25 to 40 years, this suggests that the banks are looking to retain their assets and increase their value with a systematic approach to maintenance and replacement. Following on from this, the banks are also becoming increasingly conscious of their running costs and we are seeing a greater awareness of sustainable building techniques.

When looking at US construction data, it is important to realise the vastness of the country. What is happening on the east coast can be very different from the mid states and the west coast. Each region has different cost parameters and it is difficult to evaluate a country overview with such diverse factors affecting the cost drivers. In addition, the construction industry is highly localised US and as a result, the pricing behaviour of contractors is related to a combination of local factors affecting the ability of the contractor to source resources in their local market as well as industry wide conditions relating to the US.

However, there are certain drivers that, while having different effects in different regions, have a common influence on construction demand and consequently cost. One key element is the climate, the extremes of which can throw up a number of cost penalties. It has been estimated that the April tornado and storm losses that brought havoc across six states could reach US$5.5bn (£3.4bn). Following on from record snowfall in the West during January and February, and flooding in the North-east in April and May, at the time of writing the Mississippi river was standing at near record levels and was expected to flood vast areas of Louisiana and Tennessee. 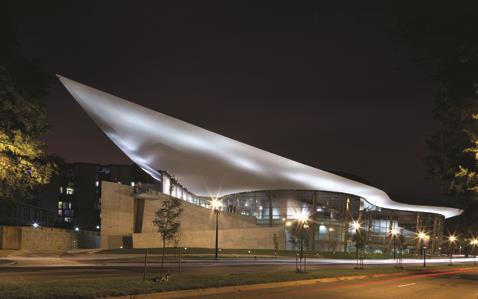 Even though the financial sector seems to be returning to health, financing remains a challenge for contractors. The depth and the duration of the recession have severely strained contractor working capital. In many respects, the market is now entering the most dangerous time for bidders; in the early portion of the recession, bidders were likely to be cash-rich as revenues from earlier projects exceeded current costs. As the situation recovers, bidders change to a position of having little or no cash revenue arising from current projects, just as they are looking to increase activity.

In addition, the recession will have weakened the financial and the balance sheet positions for contractors, just as banks are increasing the stability requirements for business working capital loans, making it harder for contractors to maintain their loan capacity. It is likely that this will lead to classical under-capitalisation, leading to contractor failure in some cases.

Material prices are likely to show some volatility as supply and demand rebalance. Despite strong increases in worldwide commodity prices, which have seen major increases in steel and oil prices, figures from the Bureau of Labor indicate that prices for a number of key materials were still falling earlier this year, ready-mix prices in April were down by 1% compared with a year earlier while cement and brick prices were both down by 4%. After a long period of declining rates, wages in the construction sector have started to pick up with average rates in April approximately 2.5% higher than a year ago.

It is evident that the US economy is slowly coming out of a major recession. As a consequence, construction costs are likely to rise as demand for buildings increases. The increase in commodity prices and some material suppliers’ attempts to pass on the increase of fuel surcharges are inevitably going to influence the construction cost index. Interest rates should remain at an all time low for 2011, which should also fuel the construction industry and help the industry regain its position as a major force in the US. 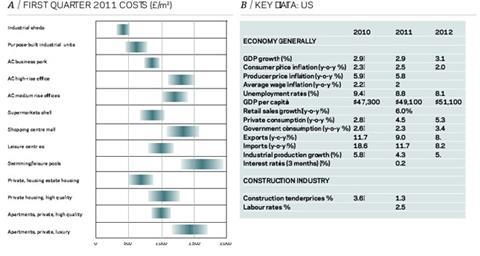