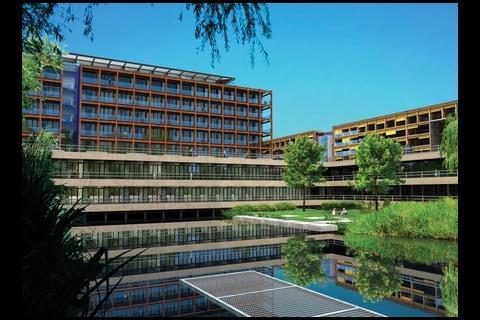 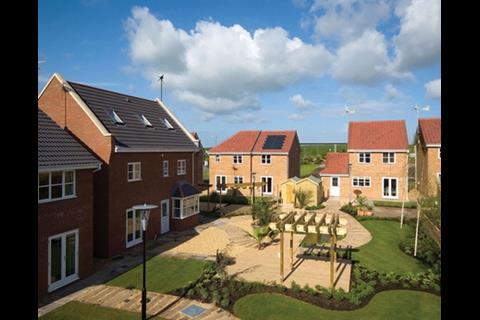 Can the technology that powers the humble fridge contribute to reducing carbon emissions in a cost-effective way? Simon Rawlinson of Davis Langdon looks at what heat pumps can, and cannot, offer a future development

Heat pumps are an attractive option for reducing carbon emissions caused by buildings. For one thing, they are based on well-established technology and nearly half a million systems have been installed worldwide.

In countries such as Sweden and Switzerland heat pumps have demonstrated that they can provide ample heat in the most challenging environments, and as a result have captured a significant share of the housing market.

Heat pumps exploit the energy present in the wider environment – about 50% of solar energy that falls on the earth’s surface is absorbed by it. This means the ground is an energy reservoir regardless of the air temperature. For example, when the air is at –18°C, the ground has 85% of the energy it would have when the air temperature was 21°C, although it is harder to extract.

The principal argument for the wider adoption of heat pumps is their operational efficiency and reliability. Although they are more expensive to run than conventional heating and cooling systems, on a pound-for-pound basis they provide a similar level of energy as other low-energy and renewable systems, such as small wind turbines and solar water heating, and are less vulnerable to changes in the weather.

Looking forward, the potential of the UK heat pump industry is growing. A British Standard setting out the design principles for heat pump systems (BS EN 15450) was published in 2007 and an increasingly positive press has raised the profile of the technology.

The current rate of take-up for heat pumps in the UK is not great: 500-700 systems a year are installed, mostly on a domestic scale. Larger scale systems are being proposed to reduce scheme-wide carbon emissions, but its clear that the systems are not doing as well as they should. So, what is holding back their wider adoption?

The main barriers are:

Heat pumps use the refrigeration cycle to upgrade low-grade background energy collected from sources such as air, ground or ground water into energy for use in hot water supply, space heating or cooling.

The process is similar to that used in a domestic fridge. Refrigerants, which are chemicals that readily change state from gas to liquid, are pumped around the system’s pipes to collect the background energy, a process that exploits the “latent heat” effect (that is, the energy required to change a material’s state, in this case from gas to liquid and back).

The low-grade energy absorbed by the refrigerant turns it into a hot gas, which is fed into a high pressure compressor, where a heat exchanger turns it into usable energy.

As most of the energy produced by a heat pump is taken from an extensive, low-grade heat sink such as sub-surface soils, the efficiency of the systems tends to be high.

Energy sourced from below ground is particularly useful because sub-soil temperatures are constantly at about 9°C, which enables systems to be sized with a reasonable degree of accuracy and allows year-round efficient operation.

A typical ground-source system achieves a co-efficient of performance (COP) of between three and four. In comparison, the most efficient condensing boilers have a COP of less than one. This means that three to four times more energy is generated by a heat pump than is put into the process.

Operational cost-effectiveness is determined by the premium cost of the heat exchange network and the cost of the energy required to drive the system. Operational effectiveness will also depend on the stability of the temperature differential that drives the natural heat sink.

The three main types of heat pump systems are as follows:

• Air-sourced. These heat pumps are the equivalent of a conventional refrigerator.

They are the most common form of heat pump and are widely used in America and Germany. They are used mostly in locations that are isolated from natural gas networks. They require minimal infrastructure, but can be noisy.

• Open-circuit ground-water pumps. These systems typically recycle cooling directly from ground water reserves. Users have to obtain an abstraction licence and pay water usage charges, which run at between £10 and £20 per 1,000m3 of water. For most installations, waste water is directed into watercourses rather than back into the original aquifer. Owing to the latent energy available in ground water, COPs for cooling can be high. However, the availability of surplus ground water and drought could affect opportunities.

• Closed-circuit ground-sourced heat pumps. These systems utilise heat energy retained in the upper layers of soil and rock and, other than the high costs of groundwork, are well-suited to the UK climate. In closed circuit systems a brine solution is circulated around a network of pipes, absorbing a small amount of heat energy from the soil.

This energy is transferred through heat exchangers to a self-contained refrigeration circuit. In heating mode, the brine solution absorbs the heat from the soil, potentially reducing the temperature differential over time if the system is not supplemented by solar or geothermal heating.

Technical considerations, which have a direct impact on a system’s long-term effectiveness include:

• The size and capacity of the heat sink. This is determined by the size and layout of the site, the temperature difference between the soil and the building and the “conductivity” of the soil.

If the site is constricted, costly vertical boreholes may be required as an alternative to simple horizontal trenches

• The required operating temperature of the system. Although heat pumps are more efficient than other heating systems, they run at lower temperatures, typically 15° to 20°C lower than a condensing boiler. This means that larger heat emitters are needed. As a result, underfloor heating is often specified rather than conventional radiator panels

• Safe hot water supply. The temperature of stored hot water needs to be kept over 65°C to kill legionella bacteria. Heat pumps can be used to pre-heat water, with secondary heating being used to keep water above the acceptable minimum. Recent technological advances have allowed us to exploit the “superheat” of compressors, which means that heat pumps can provide about 20% of their output at a sufficiently high temperature to protect against legionella risks

• Extended operation of pumps, compressors and so on. This places a premium on the running costs and reliability of mechanical elements of the system, particularly if they are used for both heating and cooling.

Heat pump systems are markedly more efficient than conventional systems, but that does not necessarily mean installations should be sized to provide for the full heat load. In commercial buildings, for example, where there may be both cooling and heating requirements, and assuming there is sufficient capacity in the heat sink, it makes sense to size the system to the smaller cooling load, providing supplementary heating by more conventional energy sources.

The key design and performance metrics that need to be considered when determining the optimum sizing of the system include:

Given the potential scale of many heat pump proposals and the length of the payback period – potentially 10 years or more – heat source durability is a significant risk with regard to performance, return on investment and carbon emissions reduction.

The table below summarises the capital costs of ground-source heat pumps and equivalent boiler and chiller systems at a range of scales. The 4kWh system would provide most of the needs of a domestic house, whereas the 400kWh system would serve about 5,000m2 of net office space in heating mode, or 3,000m2 in cooling. The costs exclude the wider plant room installation, which is common to the two systems.

As gas-fired condensing boilers also have lower operational costs than heat pumps. The installations only provide a positive cash flow if the alternative fuels are fuel oil or bottled gas. In these instances, payback periods are in the range of 10-12 years.

Cost drivers affecting the economics of heat pumps include:

• The size of the heating and cooling loads. The cost of heat pump systems is very sensitive to the size of the load, so it is important to have made the building fabric as thermally efficient as possible before considering the specification of a heat pump system. Where both heating and cooling are used, systems are typically sized to the smaller cooling load. Given the high initial costs and sensitivity to sizing, it also makes economic sense make the system large enough to deal with 70% of peak loads; this will cater for about 95% of overall annual demand

• The size of the heat collector network. This is to an extent determined by the thermodynamic quality of the soils, together with the sizing of system loads. Typically, between 17 and 26m of trench is required to produce 1kW of energy. Boreholes of between 11 and 26m are required for a similar output. The use of spiral “Slinky” pipes reduces the overall trench size, but requires double the length of pipe – thereby increasing the work done by the pumps and compressors. Two key economic issues associated with the collector network are:

The balance of cost and benefit associated with large-scale ground source heat pump installations illustrates that there are few easy solutions to the challenge of specifying secure and reliable low-carbon energy sources.

In comparison to other onsite systems, such as photovoltaics, wind turbines and solar collectors, heat pumps are proven to provide reliable sources of heat and cooling over an extended period. Furthermore, in comparison with other systems such as biomass boilers, the availability and cost of input energy is known and reliable, and the systems themselves need little operational management.

However, in many cases the prospect of payback is distant and a wider case for adoption has to be made – based in this case on a low-energy agenda rather than the cause of onsite renewables.