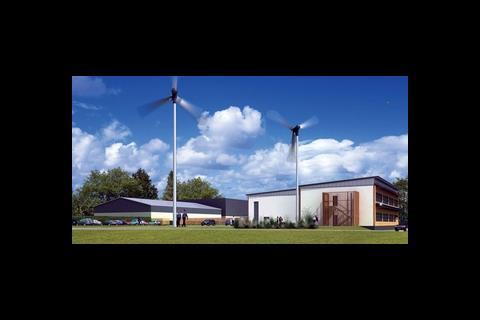 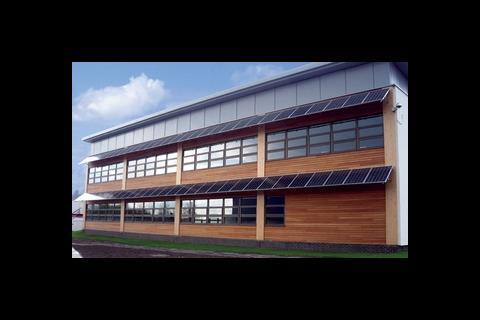 South elevation, south block. Larch cladding, here and on the south elevation of the north block, is A-rated for sustainability. 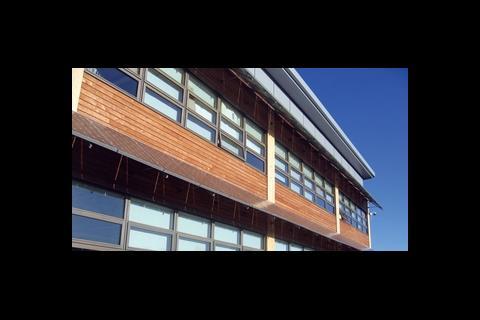 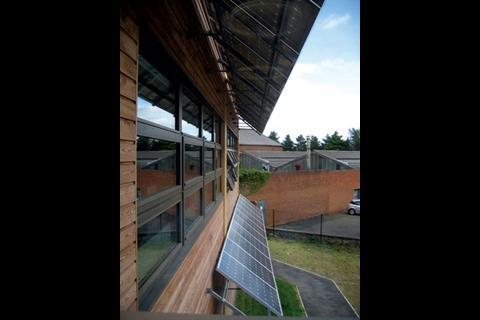 Even the architect says it is a modest building, yet Defra’s new office in Alnwick could be the first building to gain a “better than excellent” BREEAM rating. Will Jones examines what sets it apart

You might expect the building bidding for the first BREEAM outstanding rating to be laden with green bling. Yet Defra’s new 1600m2 office in Alnwick, Northumberland is no high-end, money-no-object exemplar or one-off sustainable nirvana. Little apart from its project name, ZEBRA – Zero Emissions Building Renewing Alnwick – suggests it could set a new standard in sustainable construction.

Simplicity was the key to the two-storey design and build project, completed last year at a construction cost of £4.16m, and now accommodating 120 Defra staff. It achieved a BREEAM excellent rating with an as-built score of 80.72% and is the first office building to get an A+ energy performance certificate. There have been industry plaudits, too: it is the CIBSE Low Carbon New Build Project of the Year and won the 2008 BREEAM Offices Award.

The project team is now set on attaining BREEAM outstanding. “The BRE approached us during the project to be a pilot scheme for its research into a ‘better than excellent’ rating,” says Marc Fincham of Appleyards, the project manager. “We are re-examining all of our credits in line with BREEAM 2008 and seeing where we qualify for the new innovation credits to establish if we can top the 85% needed.”

Somewhat confusingly, the building is now named Lion House, after its predecessor, and its logo is striped in the county colours of red and yellow rather than zebra black and white. But architecturally it is relatively uncomplicated and that is the key to its operational success.

Two rectangular blocks occupy the site, near where its 1960s namesake stood. Each only 13.5m wide, they are staggered to gain maximum window area and joined by a narrow link. The structural design is a combination of steel frame and exposed glulam columns, with a precast concrete plank flooring system used at first-floor and roof level. The walls and roof void are heavily insulated with wool, providing good U-values of 0.2W/m2K for the walls and 0.15W/m2K for the floor and roof. The north and south elevations have strip glazing and larch timber cladding, which is A-rated for sustainability. The east and west walls are windowless and rendered.

The orientation and staggered positioning are designed to provide maximum ingress of daylight and good cross-ventilation via the top-hung vents in the windows that line the north and south elevations. A brise-soleil of angled photovoltaic cells shades the south-elevation windows from high summer sun while generating about 12,000kW/h per annum of electricity.

The design architect, Raymond Gill of Gibberd, says: “We have designed a modest building, whose aesthetic is derived from our aspirations to make it environmentally sound. We have maximised its passive sustainable potential and integrated active measures, like the PVs, to make the very best use of them in multiple ways.”

“We initially wanted to use one large wind turbine but planning restrictions meant that we had to go with three smaller ones. At 15m, they are the biggest we could have on the site and are well above the building- and tree-lines. We positioned them staggered instead of in a line to best negate wind shadow effects. They are each predicted to generate 21,000kW/h of power per annum.”

Together with the 120m2 of PV arrays, the turbines’ production accounts for a good proportion of the energy used in the new Lion House. It doesn’t, however, cover all requirements on a day-to-day basis and so electricity will be imported from the grid when needed. This is offset by power sold back to the grid on weekends and at night when the offices are not in use.

Ventilation is mixed mode, “operating in the most efficient ways at all times of the year”, says Banks. “We do this by engaging the users and giving them some control but also encouraging them to work with the building when we think they need to. This is achieved by a traffic light indicator system on display in the main office areas and meeting rooms.

Fincham adds: “These user controls are a very important aspect. By not taking away all control from the user, as we see in some fully automated buildings, we provide better psychologically perceived comfort. It gives the staff at Lion House a feeling of ownership and thus an incentive to work with us rather than against us to make sure the building operates to its full potential.”

The building envelope achieved an air tightness of 3.84m3/h/m2 at 50Pa, against the minimum of 5 that was set for the contractor to work towards. Into this sealed space, a full fresh air ventilation system pushes 12 litres per second per person, via displacement grilles at floor level. In winter, incoming air is heated to 18C. Heat is recovered from the exhaust air via a thermal wheel to minimise heating requirements.

About 90% of the building’s annual heat demand is met by the on-site biomass system. This technology is popular in Northumberland because there is a ready supply of wood chips from surrounding forestry and mill operations.

Banks explains the reason for the missing 10%: “The system meets 90% because if we had sized the biomass boiler to do the last 10% as well, it would have had to be 40% larger and would have struggled to meet low summer loads efficiently. It didn’t make sense to do that economically or practically.”

Roof-mounted evacuated tube solar thermal panels provide about 50% of the domestic hot water requirements and potable water consumption is kept to a minimum by low-use fittings and rainwater harvesting for the lavatories. The office lighting is controlled by daylight dimming and motion sensors.

The commitment to an environment-friendly project didn’t begin and end with the new building. In keeping with ZEBRA’s sustainable ethos, every effort was made to recycle materials from the original Lion House when it was demolished.

A total of 1501.4 tonnes of waste was produced and nearly 92% was recycled: 1125.08 tonnes of concrete, 19.2 tonnes of timber, 76.80 tonnes of metal, 146.16 tonnes of mixed waste and 6.24 tonnes of industrial. The old furniture was donated to Green-Works, a not-for-profit group which recycles office equipment, and desks for the new building were recycled from the government estate.

The design and management team believe that collaboration by all involved, from project manager and consultants to contractor and stakeholders, was an important element of the project’s success. Together they have produced a flagship for affordable sustainable development in government.

Will their efforts be good enough to achieve the first BREEAM outstanding rating? Watch this space.