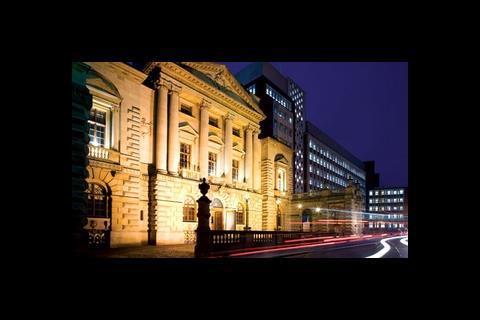 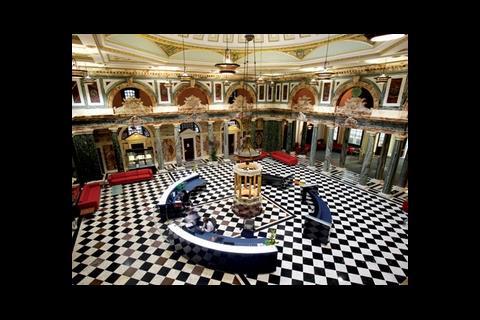 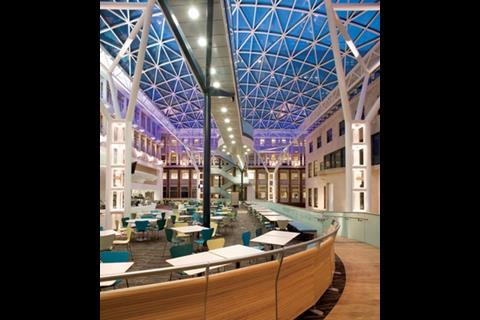 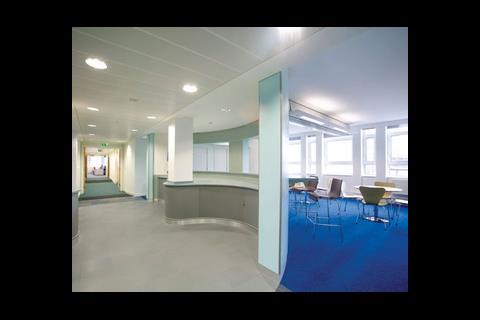 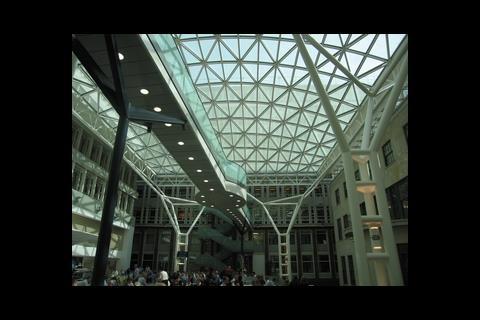 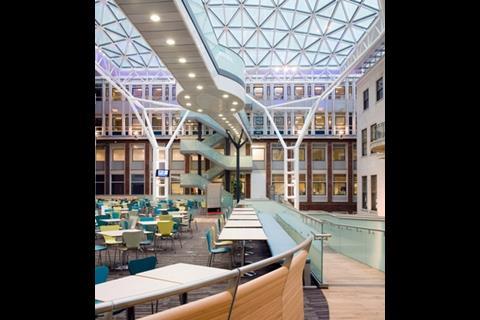 Faber Maunsell had a complex job on its hands with the fire safety strategy for Norwich Union’s remodelled headquarters.

Insurer Norwich Union has just completed a vast remodelling of its headquarters in its home city, involving refurbishment and reorganisation of five 20th century reinforced concrete tower blocks and a 19th century grade-I-listed building, and construction of a new atrium.

Project Horizon, as it was named, covered a net floor area of 37,161m2, in interconnected buildings up to 11 storeys, housing 3100 staff whose safety had to be guaranteed in the event of fire – and Norwich Union insisted normal business should continue while work was under way.

Faber Maunsell – which handled the fire engineering plus M&E, structural, IT, acoustics and security work – and project manager Bovis Lend Lease drew up a phased schedule of works in 2003, starting with the Sienna building, followed by the Carrera building, Antico building and the listed Marble Hall, and finally the Rosso building. The atrium was formed by putting a glazed roof over an external courtyard to create a striking central restaurant and breakout space.

Mike Hatter, Faber Maunsell regional director and project manager, says: “The project team took these tired buildings and went through the process of stripping out everything, retaining just the floor slabs, perimeter windows and cores, which were like bookends at the end of each block. The redevelopment essentially created an open-plan environment throughout, while recognising the ability to close off buildings in the event of evacuation.

“Key challenges for the fire engineering team included the staged evacuation between above- and below-ground atrium fire compartments and also between non-atrium-related and adjacent compartments; inadequate internal firefighting access; the inclusion of the new covered atrium; and possible fire spread between buildings, including those adjacent to the site.”

The compartmentation of the headquarters complex is relatively simple because the buildings are well fire-separated. Three main vertical zones have been created: Zone A is an adjoining building not included in this contract; Zone B encompasses the atrium and the four buildings directly linked to it – Carrera, Sienna, Antico and the Marble Hall; and Zone C covers Rosso. In addition, there are horizontal fire compartments for the below-ground floors in the atrium and Sienna, plus levels three and five in Sienna and in Antico, because of adjacent buildings.

There are five stair cores providing emergency escape for more than 3000 staff, and Faber Maunsell’s strategy is one of staged evacuation. The below-atrium areas are separated from above-ground and the evacuation is staged between the two areas. Ian Rogers, of Faber Maunsell Fire and Risk Engineering, says: “We described the stages as: below the atrium and Sienna, above-ground in the atrium-linked areas, and finally Rosso. Then, having separated the building into escape zones, we analysed escape routes to see if they could accommodate the numbers required, and they could, even with the relatively small staircase widths.” Above- and below-ground within Sienna are separated to avoid overloading stairs.

Evacuation is triggered by a detection/voice alarm system to the L2 standard of BS5839, with second knock and an investigation time of five minutes.

Other than Marble Hall, the buildings were built between 1958 and 1981 – from before Building Regulations existed through to when all construction incorporated fire regulations. So Carrera has a firefighting shaft but the others don’t. The shaft, which was almost code-compliant, was modified and a new shaft added at the intersection of Antico and Rosso. Both serve lower-ground upwards, have fire-fighting lifts and enable access to all floors within the 60m hose layout length recommended at the time of construction. Also, dry risers are provided at the extreme ends of Rosso and Antico.

The recommended 90-minute fire resistance could only be guaranteed in the central heavy structure of the building, but this resilience is calculated to ensure safety even with some partial structural failure and the strategy was accepted by the statutory authorities. “The main point is that the robust structural elements of the buildings all provide 90 minutes’ integrity. The outer elements, some quite slender mullions, would fail inwards not outwards, and so meet Building Regulations,” says Rogers.

“The height of the buildings is just on or under 30m, depending on where it is measured on the sloping site, and our discussions with the fire service concluded that they were happy to treat the complex as a 30m building, meaning that it didn’t require compartment floors or sprinklers and firefighting lifts.”

The escape routes were analysed to see if they could take the numbers required and they could, even with the relatively small staircase widths

The headquarters complex cannot be treated in isolation when it comes to fire engineering because it is close to other buildings. “This usually doesn’t figure because buildings are built with a good gap between them; a street, for instance,” says Rogers. “However, next to the Antico and Rosso wings is a bingo hall, and to the western end of Sienna was another building that included areas of sleeping risk.

“On this latter area, the cost-effective way to achieve adequate fire safety was to provide two compartment floors. This did create complexities in terms of the services and for the contractor, which had to understand fully the 3D compartmentation of a building on a sloping site and ensure no breach of compartments while working.”

Windows on the boundary facing the adjacent properties with sleeping risk were sufficiently small or already rated to be code compliant. Compartments were created at levels three and five in Sienna, taking into account that its lower-ground and basement levels were already compartmented at ground-floor level with the same sprinkler system as that under the atrium. “We cut the building into two-storey slices and, through calculations, effectively showed that the heat at the boundary would be acceptable with the amount of glass in the existing building, even if higher buildings are built where the adjacent buildings now stand.” A similar approach was adopted in the building facing the bingo hall.

Visitor access is via a narrow entry and turnstiles, which was not considered a good emergency exit, so fire escape is through the adjoining buildings and staff entrances. Zone modelling was used to show that smoke layers and temperatures would be at acceptable levels to permit escape. As mentioned earlier, the floors below the atrium are protected by sprinklers and so constitute a separate fire compartment.

“The atrium used to be an outdoor space and it is as good as one now. CFD modelling showed that when fire gets into the atrium, it cools very quickly,” says Rogers. “There are smoke vents at roof level that open on detection and air inlets in the glazed walls adjoining Marble Hall.” The windows facing the atrium are not specially treated, but its quick evacuation time means that escape occurs in safe conditions elsewhere and thereafter firefighting access is not necessary. The adjacent atrium-linked wings are compartmented at two intermediate floor levels to prevent upward fire spread via the windows.

Basements, except in parts of Antico, have sprinklers and mechanical smoke extract, designed to provide six air changes per hour and rated at 300ºC for one hour, or are naturally ventilated, sometimes with firefighting assistance. Ventilation provided for environmental purposes is being retained for smoke clearance to lower-ground floors of Antico and Rosso.

A bridge in the atrium provides access to the restaurant but is not used for escape and so is not fire rated. Similarly, the atrium steelwork does not support any fire compartmentation, and on failure in a fire does not load the adjacent structures, so it too is unprotected.

“Fire engineering issues and non-compliances have been resolved through negotiation rather than elaborate fire engineering,” says Hatter. “While all materials used in the refurbishment are obviously classed according to requirements, it is the interaction between the client, project management team, Faber Maunsell, building control and fire service that provides Project Horizon with a modern, flexible approach to fire safety.”

The finished project brought together Norwich Union’s businesses in one HQ under a sale and leaseback deal with Land Securities Trillium. While it was a complex endeavour, it represented immense savings compared with the cost of a new headquarters.