Apprentices: ‘The numbers don’t add up…’

Three times as many people are leaving the industry each year as are joining, so today’s skills crisis is set to get a lot worse. Can the sector turn this situation around and attract enough apprentices to secure the future of UK construction expertise? 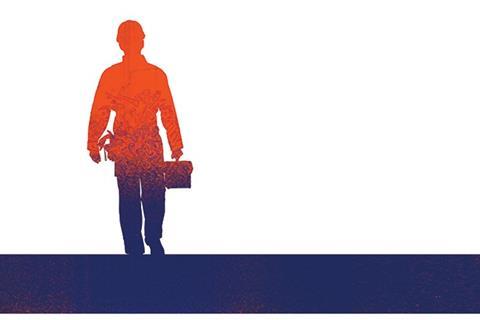 There is a big number that keeps consultant Mark Farmer awake at night. The figure in question is the mismatch between the number of construction apprentices and the far larger figure of workers leaving the industry.

“Over the last few years, we’ve been recruiting apprentices at 15,000-20,000 per annum but have 60,000 people due to leave each year. The numbers don’t add up,” says the man who has been asked by ministers to probe the industry’s widely acknowledged skills shortfall.

While showpiece projects like Crossrail and the Olympics may boast plenty of apprentices, the same isn’t true for the more run-of-the-mill projects that make up the bulk of the industry’s workload. This is one of the biggest issues that Farmer, of consultancy Cast, will be scrutinising in the wide-ranging review of the industry skills shortage that the Construction Leadership Council has commissioned him to carry out, at the behest of housing minister Brandon Lewis and skills minister Nick Boles.

No wonder that Britain’s building sites continue to attract an influx of foreign labour. According to the most recent 2011 census figures, cited in a Chartered Institute of Building (CIOB) report last year, approximately one in ten of the industry’s labour force was foreign-born, roughly double the proportion that it had been a decade before. The CIOB report warns that, due to a number of factors including high levels of fluidity in the population, survey design and small sample sizes, figures surrounding overseas labour can be slippery, but given that the industry was still mired in recession five years ago, the proportion is likely to be even higher now.

This week has been National Apprenticeship Week – but is construction really investing enough in apprenticeships to help plug the outflow of workers from the industry and move away from its dependence on foreign labour? And will the government’s shake-up of apprenticeship funding have a detrimental effect for the industry’s long-standing training body? Most importantly of all though, is the industry ready to embrace a culture change in training and career progression that can attract the young workers it so desperately needs?

Richard Threlfall, head of infrastructure, building and construction at KPMG, says the industry often talks a better game on apprenticeships than it puts into practice. “There are individuals and organisations passionate about training but the industry as a whole has proven that it is too fragmented and margin-conscious to really invest for the long term.”

On mega-projects, like the Olympics, Threlfall says the high level of apprenticeships often reflects the strong lead supplied by powerful clients. “This industry generally needs to be client-led because they have the market power and can exert significant influence on their supply chain. It’s difficult for the industry itself to operate collaboratively to get these sorts of outcomes.”

Down at the micro-business level for construction firms, Federation of Master Builders (FMB) policy adviser Andrew Dixon acknowledges that hiring from abroad is common. He says: “We know some of our members are sourcing tradespeople from other European countries through various agencies.

“Where the workforce is more transient and they might require slightly less specialised skill sets, taking on short-term, temporary foreign workers may make economic sense.

It’s a reasonable reaction to a very serious skills shortage.”

But it’s not a long-term solution to the industry’s skills shortages, he argues.

“We hope they don’t see that as an alternative to training people, it’s a short-term necessity.”

However, given the CIOB’s estimate that the cost of an average apprenticeship works out at around £24,000, does it make sense for the industry to invest in training?

The FMB’s SME member companies think so, according to Dixon, noting that 20% of his members take on apprentices. This figure might not sound impressive until it is put into context. “When you think that the majority of our members employ less than five people that’s not a bad percentage,” says Dixon, adding that only 8% of FMB members express no interest in taking on apprentices.

The main reason FMB members take on apprentices is to train them up into their own standards and ways of working, he says.

And as skill levels tighten even further, due to the demographic pressures cited by Farmer, poaching will becoming an increasingly zero-sum game that nobody benefits from.

Dixon says: “The model of transitory workforce with a high level of subcontracting tends to lead to fewer returns over the economic cycle. We need to get away from that and look at how we retain workers over the course of the cycle.”

He adds that recruiting overseas workers doesn’t even necessarily work out cheaper than taking on trainees, once extra costs are taken into account.

“If you are talking about temporary workers, you might have to spend a considerable amount of money providing housing or fees to agencies,” Dixon says. “Once you take all these different costs, there’s not necessarily an advantage.”

“The whole industry is growing and housebuilding, in particular, is growing very rapidly. So there is no way we could meet our people needs by just taking people from our competitors because they will be doing exactly the same thing,” he says, explaining why the housebuilder is planning to double the number of apprentices it takes on over the next five years to 100 per annum. 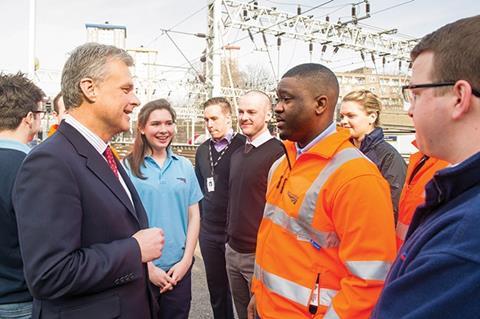 With an apprentice, you have much better productivity, much lower staff turnover and clients are happier because they see the same person at the end of the job that they do on day one: it’s a no-brainer

“If I recruit somebody through an apprenticeship they will be with me for an average seven years so, just on saving in recruitment costs alone, it will have paid for the cost of training.

“Setting aside the three-month window of new starters getting used to your processes, you have much better productivity, much lower staff turnover and clients are happier because they see the same person at the end of the job that they do on day one: it’s a no-brainer.”

However, while he may strike an evangelical tone about the virtues of training, Hale acknowledges that his company experienced teething troubles with its first batch of apprentices. “We were expecting them to be more work-ready and we’d forgotten that they are still really children. You have to spend a year making them understand that they are at work and not at school.”

A lot of construction industry bosses will be less forgiving of the vagaries of the teenage psyche than Hale though.

Steve Sanham, development director at housebuilder HUB, says teenager rebelliousness isn’t welcome on site: “Most contractors don’t want 16-20-year-olds on a building site. They want people who have been through their late teen years and got that [immaturity] out of their system.”

Immaturity might be one of the factors that helps to explain the heavy attrition rate of construction apprenticeships. Out of the 13,920 apprentices who started in 2011/12, 8,470 completed their training in 2014/15; less than two-thirds of the total.

Part of the problem, Farmer believes, is that construction is the last choice for many school-leavers. “When they’ve looked at every other option, they then start to look at construction. We hear that their hearts are not really in it,” he says.

His main solution to this problem is to make construction apprenticeships more attractive. But this will entail hard thinking about the content and structure of construction courses.

One of the problems with construction training, Farmer suggests is the industry’s habit of pigeonholing its trainees into artisanal categories, noting that for many youngsters the prospect of a lifetime laying bricks is “a little bit uninspiring”.

He believes that apprenticeship programmes could be reshaped to offer a broader range of skills that will help trainees set up in business or move into management later on. In addition, Farmer says training programmes need to be more tailored to the requirements of the tablet generation, who are more comfortable working on a screen rather than with their hands.

KPMG’s Threlfall also thinks that courses need to review the skills they are teaching to apprentices. He says: “One of the challenges at the moment is that so many of the courses are college-led and they are not really incentivised to provide the skills the industry really needs.”

Karen Ryan, best practice manager at Rugby-based construction firm Stepnell, says that part of the problem is that the standard of college tutors leaves “much to be desired”. She says: “The good ones are going back into industry because there’s no money.”

The good news is that the shake-up of construction training, which will inevitably be triggered by the government’s decision to introduce an apprenticeship levy, offers the industry an opportunity to rethink its traditional modes of training. Lovell’s Boughton says: “The levy will help because the government is going to take some money off us whether we like it or not and only give it back if we take on apprentices.”

The levy will equate to 0.5% of the payroll costs for firms with a turnover of more than £3m. They will then be able to redeem this payment by buying apprenticeship training, effectively forcing companies to invest in their workforces’ skills.

Within the industry, the government’s plans have sparked angst over the future of the Construction Industry Training Board (CITB), one of the few surviving sectoral arrangements.

Contractors with a turnover of £3m plus are understandably reluctant to continue paying the 0.5% they fork out now to the CITB. Building understands that the government has agreed that for these larger firms CITB payment will be capped at the first £3m of turnover, after which the apprenticeship levy will kick in. The existing CITB levy of 1.25% on labour-only subcontracts is likely to be untouched.

However, Dixon expresses concerns that the big firms’ semi-exit from the CITB will reduce the board’s resources, already reflected in its recent decision to axe a third of its staff.

“Inevitably you will have a smaller pot to support training for the rest of the industry because you have taken away a chunk of what was there. We hope the loss can be minimised.”

Boughton is more optimistic, hoping that the levy can be used imaginatively, for example, by helping to fund the fees and living costs of those taking higher and degree level apprenticeships.

Despite all these changes, the longer-term problems with funding mean there aren’t enough courses, partly because construction training is relatively expensive to provide, says Farmer: “Even if we increase the number of apprentices, there’s not enough places because the number of courses is declining.”

It looks like finding enough trainees to replace those leaving the industry will continue to cause sleepless nights.

What is National Apprenticeship Week?

The government wants to create one million more.

Through the new apprenticeship levy, the government is aiming to double in cash terms the annual level of spending on apprenticeships between 2010/11 and 2019/20 to £2.5bn.

The campaign also aims to bust myths and misconceptions about apprenticeships by showing that they are not low-paid, low-skilled jobs.