The former Willmott Dixon director remortgaged his home to set up his housebuilding business – now the UK’s third-biggest privately owned developer. Ironically, perhaps, it is the focus on value and quality, rather than making money, that has made his business so successful

In  April 1999, at the age of 40, Andy Hill was made redundant from his main board director job at contractor Willmott Dixon, along with another senior colleague. He suddenly found himself without an occupation. 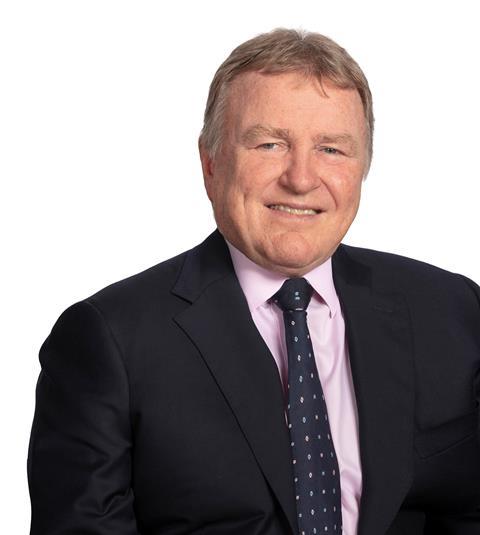 “Neither of us saw it coming,” he says, in his quiet, mellow Estuary tones. “So, I thought – what do I do? I hadn’t been for an interview for 20 years.” It turned out to be the best thing that could have happened to him.

Soon after, he set up Hill, initially as a contractor and then later moving into development. But back then he did not know how successful it would prove to be. “I remortgaged the house [to invest in the first development]. Oh yes – I was all in. It was pretty scary … pretty scary.”

Twenty-two years later, his bet has well and truly paid off. Hill Group is one of the UK’s most successful housebuilders and the third-biggest privately owned developer, behind Bloor Homes and Miller, turning over more than £650m last year.

Testament to its success is that, despite going through – in Hill’s words – “the most challenging year of operation” ever in 2020, the firm still reported revenue growth of 12% and more than £44m of profit.

Contractors come and go. If you want to be here to stay, then go down the housebuilding route

Working from its Hertfordshire base as a partnerships housebuilder and a developer of homes in the South-east, it delivered 2,000 homes last year, enjoying a reputation as a producer of quality and well-designed housing. Meeting in his firm’s offices in a converted mill building just outside the M25, Andy Hill reveals what is coming next for the business, and how his personal experience of illness has helped drive his ambition.

Hill Group’s first contracting jobs in the early 2000s were for housing associations, with Stadium, now part of Network, giving Andy his first big break. He had set the business up with little more than his black book of addresses and a London telephone number, but from early on, using his redundancy pay-off, he dabbled with development, winning a gong from the Mail on Sunday for British house of the year in 2004 for one of the new firm’s first developments.

But Hill says it was in 2008, at another construction industry awards do, that he had his lightbulb moment, surveying the other firms with their names up in lights. “What it was telling me was that contractors come and go. If you want to be here to stay,” he says, “go down the housebuilding route.”

From then the firm dedicated itself to becoming a housebuilder first and foremost, and today its development business accounts for around 60% of its turnover. But it has not stopped investing in construction, and the firm is an established “partnerships” housebuilder, working with the likes of Swan Housing and Camden council, and late last year selected by Poplar Harca for the 1,750-home redevelopment of the Teviot Estate.

Growth is definitely top of the agenda, with the business targeting a doubling of turnover from the 2020 level of just under £600m, to £1.2bn by 2025. Hill, a chartered building professional, says that the target – broadly equating to 15% annual growth – is achievable, and given his track record, it would be rash to discount his prospects of hitting it.

Hill’s Athena homes in the Knights Park development in Eddington, just outside Cambridg

At the moment the company boasts a landbank of nearly 7,000 homes, with discussions ongoing over opportunities for another 9,400.

Part of the growth will come from the firm, which has a joint venture with Bristol council-owned housebuilder Goram Homes, setting up a new South-west region from the city “when the time is right”, but Hill has seemingly no end of other initiatives on the go. 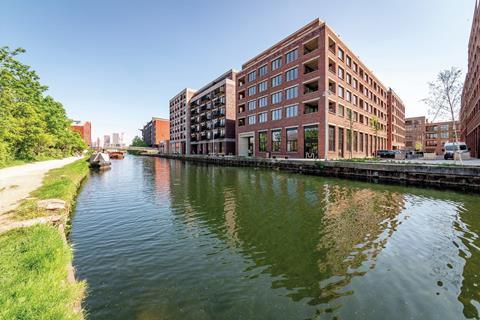 These include a low-carbon volumetric housing business with sustainability charity Bioregional, joint venture housing development businesses with both Cambridge and South Cambridgeshire councils, and a new modular venture for housing homeless people.

“We’d like to ultimately rival Bloor Homes as the largest private housebuilder,” Hill says, referring to the £1bn-turnover developer that has helped to make its owner, John Bloor, the construction sector’s richest man, with an estimated fortune of £1.28bn.

Hill, however, gives every impression of not being primarily motivated by money, and the evidence from the firm’s developments is of a housebuilder that seeks to enhance value rather than drive out cost to boost profit margins.

The firm generally goes beyond the bare minimum in terms of quality, design and specification. “It’s about being the best and having a fantastic reputation,” he says. “That’s what makes me think I’ve done well. It’s about doing the right thing, not just awards.” 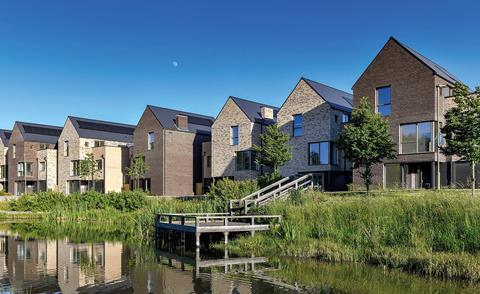 The Mosaics scheme in Oxford

Ironically, this focus on creating value has served the business well during the pandemic, as buyers have prioritised additional space and facilities for home-working as the market has rebounded. “We’ve always built larger units than the national housebuilders, and I think that’s been really helpful to us – we’ve seen that as a real selling point, and people are willing to pay for that extra space now,” he says.

“If you can build a two-bed apartment with a study area, or baby room, it’s ideal right now. We’re as forward sold as we’ve ever been as a business. Used to have stock numbers of 100, now we’re down to around 25. We’ve never been in better shape.” 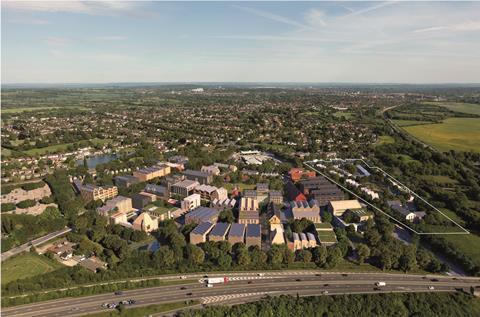 Hill’s desire “to make a difference” has also guided his continued involvement in estate regeneration schemes – another area where Hill Group seems to have found a happy coincidence between doing the right thing and making a return. With another scheme set to be announced, Hill says the market for partnerships building has “taken off” in recent years. “It is good business, because the estates come with existing stock, so it’s not taking a huge land and capital payment up front,” he says. “Yes, you’re sharing rewards too, so you don’t make as much profit. But what you do have is a larger site, where you can move tenures from time to time as the cycles change.

“And you’re creating new places. When you do regenerate an area, it does change people; I’ve seen people change their behaviours. I’ve always really enjoyed that side of it – you can change people’s lives.”

Hill himself can argue that he has a fair share of experience in dealing with change. Not only in bouncing back from his dismissal from Willmott Dixon, but also in dealing with a worsening chronic medical condition, muscle channel disease, that has damaged his legs.

It has left him largely confined to a wheelchair in recent years. Now 62, he was unaffected prior to his 40s, but the condition has steadily worsened over the past decade. Characteristically, the experience seems to have simply charged up his focus on driving the business even further. “I’ve got a lot of things I can’t do,” he says. “I think this makes me very competitive at work as it’s one of the things I can do still.

“It might sound a bit sad, but the reality is on a weekend, during the day, it’s difficult for me to join in with a lot of things. I can’t really walk anywhere; it’s really difficult. So this just drives me [in the business] and”, he pauses, and smiles broadly, “I just absolutely love it.”

I don’t want to lose control of the business by going out and getting venture capital money in. Selling it off – that’s not the intent

One of the things this drive has been focused on in recent years is a £12m charitable project – devised for Hill Group’s 20th anniversary in 2019 – to provide 200 modular homes for local authorities and charities to use for housing homeless people.

Hill says it has enabled him to help some extraordinary organisations – such as a charity housing female ex-offenders – but, typically, there is also an angle in terms of business development. 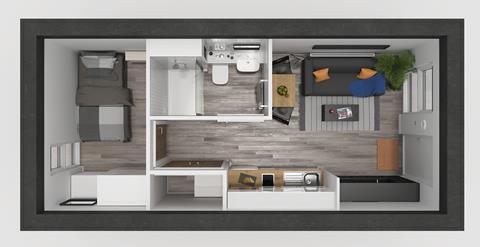 Setting up the charitable project led Hill Group to invest in a 50% share of a Shrewsbury-based volumetric housing manufacturer, Volumetric Modular. Now, Hill is looking to expand the charitable venture into a business, once the 200 promised homes have been supplied, meeting local authorities’ need for temporary accommodation to house homeless households.

This, he says, will see the business set up a bespoke modular housing factory in order to be able to ramp up production. “I want it to be part of the business ultimately that adds value, and that stands on its own two feet,” he says, but he insists that the ambition is not for this to build volumetric modular homes for its private sale housing business.

Probably the biggest difference between Hill Group and many other fast-growing regional builders is Hill’s clear desire to retain control of the firm for the family – rather than bring in funders to turbo-charge rapid expansion.

“I don’t want to lose control of the business by going out and getting venture capital money in,” he says. “Selling it off – that’s not the intent.”

An interior shot of SoloHaus homes

It is clearly not a model he has much time for. “The housebuilders which have got a lot of VCs [venture capitalists] buying people out just recently; they’re the ones that worry me, because all they’re going to try and do is build something up out of it [for a business sale].

“You do see certain firms are driven to get work, to present their accounts in a certain way – just anything to add value in the picture frame – rather than doing the right long-term thing for the business.”

Hill says his group can avoid this because of the comparatively modest dividends taken out by the family over the years, meaning it will be possible to finance all of the firm’s projected growth without seeking outside help.

“It’s how the company has grown – the money has been left in the business. It’s all been reinvested, and from that reinvestment we’ve grown,” he says.

Hill is clearly not in the market to grab a single big payday, either, with a clear plan to pass the business on to his sons – Greg (aged 34) and Tom (aged 32) – when he retires. Greg is already positioned as deputy chief executive of the business, with Tom regional director running the Cambridge Investment Partnership. 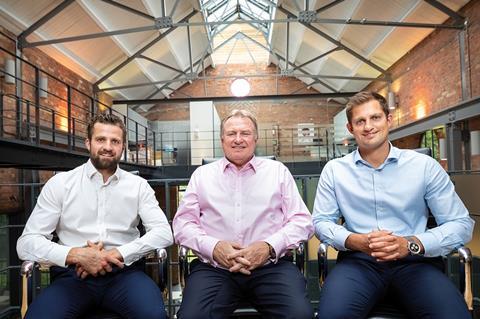 Hill says: “There’s no need, no reason for us [to sell]. I’m very fortunate; I’ve got succession in the business within the family.”

All in all, despite the challenges of the pandemic and the need to address “a few” developments deemed, post-Grenfell, to have dangerous cladding, things look pretty rosy for Hill – both financially and in terms of Andy’s wider ambition to put something back.

“Contributing to some great schemes, and doing some good for those who aren’t as fortunate as the rest of us,” he says. “That’s what I’d like to be known for.” Right now, it looks like he might just manage it.