NBS survey: The BIM that will bring us together

NBS’ annual BIM survey suggests that uptake of the collaborative technology has risen sharply over the past year. But is it really becoming the industry norm? 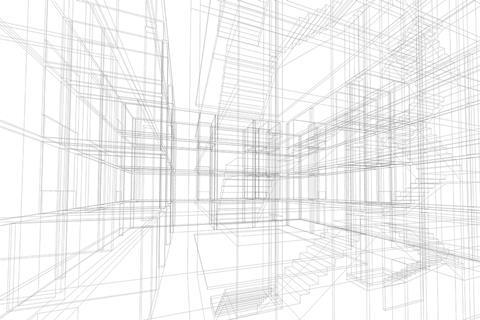 Entertaining the guests at this month’s Building Awards, comedian Rory Bremner dared to make a number of jokes directed squarely at the industry. “I’m going to be talking a lot about BIM later,” he said at one point, “which is a bit of a worry, because I really don’t know anything about it.
“But that’s OK,” he deadpanned, “because I’m pretty sure none of you do either.”

The gag worked because since the launch of the government’s plan to use level 2 building information modelling (BIM) on every central government construction contract by 2016, BIM has been the buzziest of all the industry’s buzzwords. And undoubtedly the number of genuine practitioners of the collaborative digital design technology using it properly in live projects has been vastly outweighed by the bandwagon-jumpers desperate to spray the terminology around in order to sound as up to date as possible.

But whether you’re an evangelist or a sceptic, the latest figures from the most authoritative annual survey of uptake of BIM in the UK show that use is quickly gathering momentum. A sneak preview of the annual BIM survey conducted by specification provider NBS (see box, overleaf), and due to be launched next week at BIM Show Live, reveals that awareness of the technology is virtually universal, having risen to 95% this year. And, more importantly, the last year has seen a huge leap in those people who have used BIM on live projects - up from 39% to 54% of all respondents.

With almost £1bn of public construction projects now using the technology, the shift is so stark that Adrian Malleson, head of research at RIBA Enterprises, which owns NBS, says a tipping point has been reached.

“We’ve gone through the early adopter phase. This is now starting to become the norm.” So is this truly the case? And if so, what does it mean for the 46% of firms who haven’t yet started on the journey to working with BIM?

Certainly the man in charge of the government task group set up to guide the industry towards the 2016 target, Mark Bew, is pretty pleased with NBS’ findings. “Every year we have seen a marked improvement in the response from the supply chain,” says the BIM Task Group chairman. “Our industry is not known for moving particularly fast. There aren’t that many government programmes with the construction industry that have shown such progress. I’m confident we can hit the deadline.”

We’ve gone through the early adopter phase. This is now starting to become the norm

RIBA Enterprise’s Malleson, likewise, hails the progress that has been made, despite the fact the vast majority of central government’s £20bn construction spend is still not being delivered using BIM. “Given the government’s track record at hitting targets generally,” he says, “if you wanted to pick one to have faith in them achieving, then this would probably be it.”

And the government isn’t the only client specifying that its suppliers work with BIM. Progressive clients such as Great Portland Estates are doing likewise, with GPE’s head of projects James Pellatt saying Lend Lease’s investment in the technology was instrumental to its successful £500m tender for the Rathbone Place project in central London. “It definitely helped them win the project. We remain very enthusiastic about BIM and it’s starting to deliver real benefits.”

Phil Bevan, head of residential at architect AWW, says his firm is another example of where investment in the technology is starting to bear fruit. “I think the market for firms to do work without using BIM is in terminal decline. Those firms that don’t learn the technology will soon not be able to compete.”
Probably the quickest uptake has been among the major contractors for whom public sector work is bread and butter - they have had little alternative but to invest heavily in the technology and training required, knowing the government deadline is fast approaching. Many of those firms, such as Skanska, Laing O’Rourke and Balfour Beatty, are now seeing the benefits of using BIM on all their projects - and requiring their consultant teams to do the same.

Bevan says: “The main contractors are being very demanding about it. Many have their own protocols which we’re having to adopt on their projects. So anyone working with major contractors will soon have to move across.”

Richard Saxon, the former chairman of BDP and now an independent consultant and member of the BIM Steering Group, agrees: “The contractors are now saying you’ll only work with us if you work in BIM.”

Slower on the uptake

However, as Saxon and others readily admit, it is not quite as simple a picture of unalloyed progress as that. While BIM awareness is near universal, actual adoption is not merely a case of whether you have or haven’t used a particular piece of software. It’s a continuum, moving all the way from creating drawings on AutoCAD at one end (so-called level 0 BIM), to the fully collaborative working of all parties on a single model that contains physical, programming, cost and management information at the other. The government requirement is for level 2 BIM, which calls for different parties in the supply chain to use protocols that allow them to share data, and requires so-called “5D” information - the physical design plus construction sequencing and cost data.

Saxon says: “The problem is it’s ‘how long is a piece of string?’ If you ask people whether they’ve done level 2 BIM, they all say yes. But then if you ask them if they’re really doing it 5D, the answer’s no. Or if they’re using COBie [the technology platform that turns BIM into a tool to aid facilities management], the answer’s no.”

This view is backed by the survey data. The use of COBie is still a minority pursuit: just 23% of BIM users have experience with it. Similarly, less than half of those using BIM have adopted the industry foundation class, or IFC, open file format. This allows teams to share work irrespective of the IT platform they’re using, and is seen as essential for the growth of the sector as it allows companies to avoid the expense of software licences. No wonder Bew says that BIM “maturity and industry capacity” is going to be the focus of the BIM Task Force over the next two years to the 2016 deadline.

And while some private clients are using BIM, they are still very much the exception. AWW’s Bevan says while his firm now works more efficiently by using BIM on all projects, it is not doing it to meet demand from private clients. “With private clients we’re driving the process. They often don’t understand the benefits,” he says. GPE’s Pellatt agrees: “I’m somewhat surprised but many other private clients don’t seem as keen as we are.”

Pellatt says GPE is seeing huge benefits from moving to BIM, but is also having to meet upfront costs of implementing it - mostly in terms of employing a “BIM facilitator” on projects.

He credits the delivery on time of the developer’s 240 Blackfriars in London, despite one of the toughest winters of the last decade in terms of days lost to bad weather, to BIM work put in upfront and is adamant GPE makes this cost back twofold in better delivery. “Our fees would be cheaper if we didn’t do this – we’d be spending hundreds of thousands less on each project. And it causes friction with the team, as not all the consultants want to make this investment. But for us any cost is just bringing forward contingency spend.” Overall he estimates GPE spends about 0.5% of the project cost on using BIM.

Clearly however, not all clients - including the government - are prepared to accept that they may have to pay more for the benefits that come with BIM. At the same time, many in the supply chain - both consultants and smaller contractors – are struggling to find the capacity and cash to invest in the technology, particularly with work picking up after a cash-draining recession. Bevan says moving to BIM actually reduced productivity at AWW for a year to 18 months while its designers got used to the systems, saying it was the comparative lack of work in the recession that gave them the ability to cope with this. “We’ve all had our staff saying, ‘This will take two weeks in [BIM software] Revit, but I could do it in three days in AutoCAD.’ And then you’ve got to buy new kit. Now we’re getting huge efficiencies but it takes a while.”

With workloads picking up, firms may be too busy to divert resources to the task of upgrading, and may also feel a false sense of security that they can win jobs without innovating. The reality is that small contractors and private clients will continue procuring without requiring BIM for many years to come – though this part of the market will inexorably reduce.

For Saxon, the real death knell for those without BIM capability will come when the kind of collaborative working the technology can enable starts to become commonplace. At this point, he says, the industry will start to group into much more stable alliances and supply chains. “That will ultimately be the driver. No-one will want to be left out of these supply chains. The tide will go out on those firms not part of a stable team.”

But with the government only requiring level 2 BIM by 2016, this level of collaboration is still some way off. “At the bottom end of the market it’ll be a long time before BIM becomes standard practice, maybe not even by the end of this decade,” says Saxon.
So maybe it’s a slower train than the hype would have you believe. But it’s definitely coming. 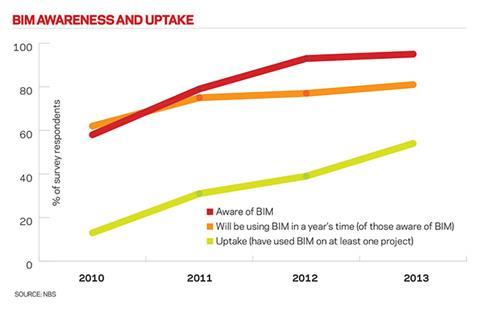 What the BIM survey says

Maturity
Awareness of the different levels of BIM has grown from 51% in 2012 to 73% in 2013. Among those who were aware of the different levels, most have reached at least level 2, and 7% say they have reached level 3. This leaves 42% who have yet to reach the level of BIM maturity required for publicly funded work in 2016. The IFC open file format is used by 45% of respondents, while 23% use COBie – up from 15%
last year.

Full results
The survey took place at the end of 2013 and garnered responses from over 1,000 construction professionals including architects, QSs, contractors, building services engineers and architectural technicians. The full results will be revealed at 1pm on 23 April at BIM Show Live. Subsequently it can be downloaded from thenbs.com.