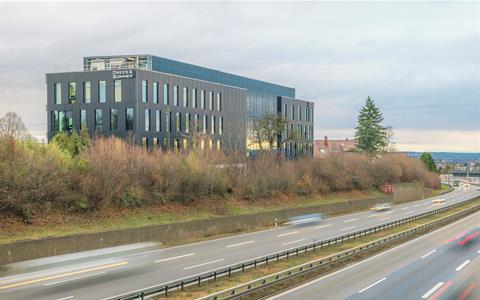 It might be playing into national stereotypes about efficiency and meticulousness to say that the most impressive thing about Drees & Sommer’s new Stuttgart headquarters is its record keeping, but the statement is a true one, nonetheless.

Obere Waldplatze 12 (OWP12) is a €22m statement of the German consultant’s commitment to circular design principles and of a particular green philosophy – namely, that construction’s green problem is to a large extent a problem of information.

The development – 7,500m2 of office space set across four storeys – makes maximum use of the sun, producing more energy than it uses, and its modular facade is designed to be reused and recycled with ease. But supplementing and enabling these headline features are a set of information tools, developed by D&S and its partners, which are already being put to use in the UK as the firm eyes an Anglo-expansion.

The idea, essentially, is that to be truly green, you must be low waste, not just low carbon

From a distance, the most striking thing about OWP12 is its stark blackness – looking as if Batman’s in-house designer had decided to turn his hand to architecture. Look a little closer and you realise that visual effect is a result of the mass of photovoltaic modules attached to the south and west of the building.

These contribute 33% of the building’s energy supply – the rest coming from PVs on the roof as well as air and ground source heat pumps.

Not only does the facade produce much of the building’s energy, with an excellent u-value of around 0.4, it also does a lot to conserve it too. With the plot’s location beside a noisy highway, keeping sound out was also a challenge.

Engineers used a vacuum insulation design, rarely used for sound insulation because of its expense, to achieve the necessary 48dB noise reduction without compromising interior space. This allowed them to keep the thickness of the unit down to 210mm, compared with the 450-500mm that would have been required if normal methods had been used. 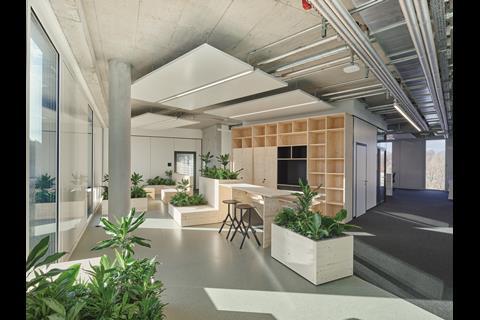 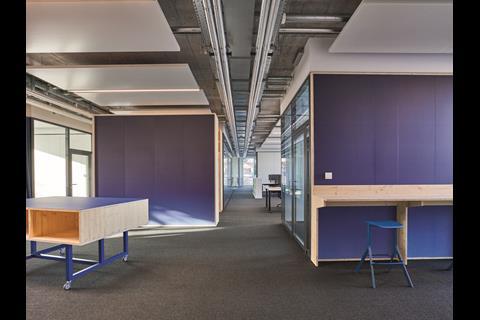 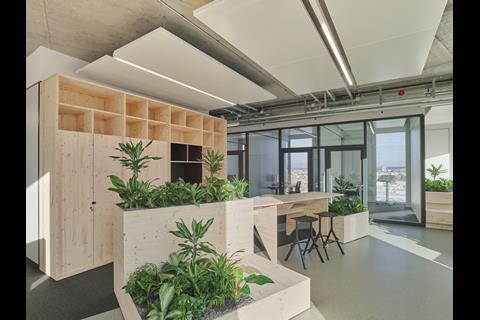 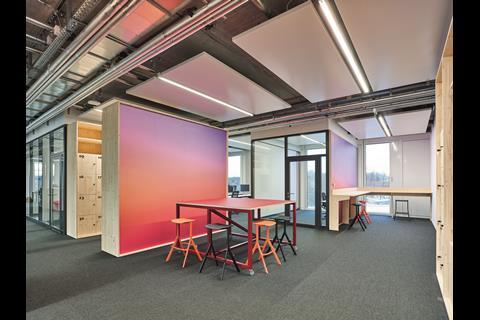 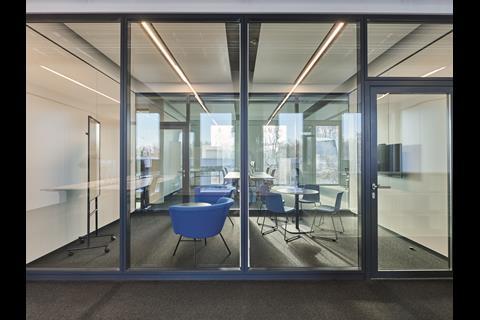 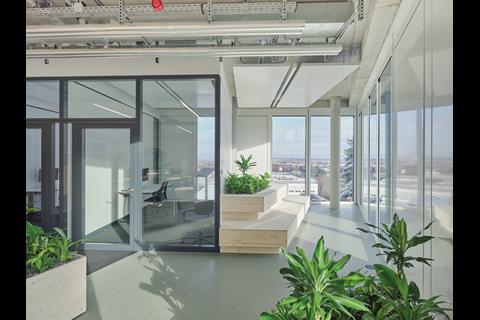 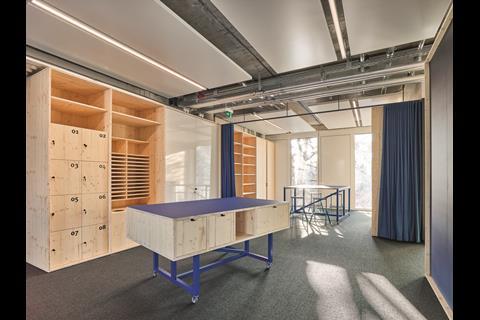 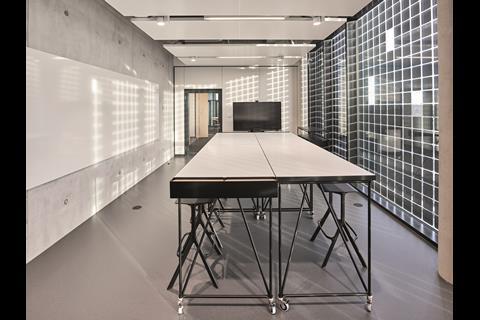 The efficient facade design contributes to the creation of an “energy-plus” building, in which 100% of the carbon footprint is embedded in the materials used to build it.

But it is exactly in the sourcing and construction of these materials that the D&S office sets itself apart, with the HQ standing as a symbol of the company’s embrace of cradle-to-cradle (C2C) design principles. C2C is a theory of circular design which was co-developed by former Greenpeace chemist Professor Dr Michael Braungart, who went on to found the consultancy EPEA, now part of Drees & Sommer.

C2C products are designed in such a way that at the end of their life they can either be recycled or returned to the earth as a completely safe, non-toxic and biodegradable nutrient. The idea, essentially, is that to be truly green, you must be low waste, not just low carbon.

OWP12 achieves this in several ways. Firstly, the company went to great lengths to source materials that met cradle to cradle standards, ensuring that toxic materials or treatment were not used in their production.

For example, rather than using conventional floorings, which typically contain volatile organic compounds and other harmful substances, the carpets at D&S’s new office are made from nylon recycled from fishing nets taken from the sea.

Not only is this good for the environment, there are claimed health benefits for building users – when a similar carpet was installed at another D&S project, Venlo City Hall in the Netherlands, there was a reported 1.5% fall in the number of employees taking sick leave. 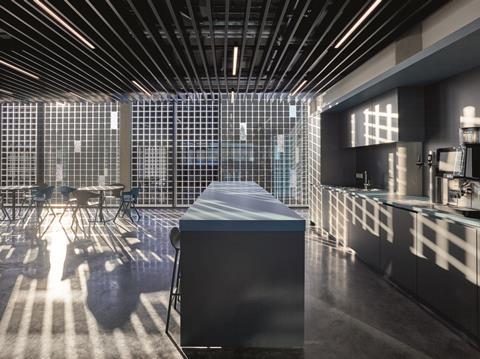 What is more, the carpets in OWP12 are not fixed using glue adhesives, nor is much of the facade. This fits into another important feature of C2C as applied to construction – separability of components.

The modular nature of the facade and certain elements of the fit-out at OWP12 means the building can be easily disassembled at the end of its lifecycle. If the components are still valuable, they can be reused. If not, then separability becomes very important – many products such as concrete in buildings are rendered almost unrecyclable due to adhesives used in the construction process.

But the keystone holding up the edifice of circular design is information, effectively tracked and documented. Drees & Sommer’s building circularity passport is a planning and documentation tool which records the dismantlability, separability and original source of components and materials in the build.

At the end of the building’s life, this will help engineers to establish what can be taken apart and reused or recycled, while also providing a more nuanced metric for the environmental status of a project than has previously been common. 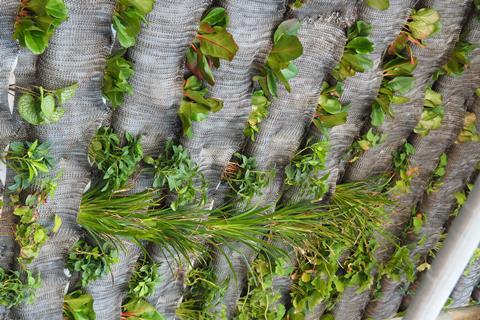 Marco Abdallah, head of engineering and sustainability at Drees & Sommer in the UK, said: “It is principally a tool to show material performance that hasn’t existed. We had the EPC, which measured the energy performance, but I think materials was always kind of a black box, and I think it’s the first time we can make those KPIs – separability, recyclability, and so on – visible and comparable to other projects.

“It’s a monitoring tool also, within the project, from the early design to the completion to see how the materials or how the building performs and how we need to improve.”

Abdallah said that clients had grown increasingly interested in the passport since the introduction of the EU taxonomy for sustainable activities, a legal framework which will be used across Europe to determine whether investments can be declared sustainable.

“One key driver was the EU taxonomy because it’s currently pushing the market quite a lot as it contains this criteria on circular economy where you have to show a circular economy study,” said Abdallah.

While previous sustainability criteria focused on the use phase – principally energy consumption – the new taxonomy embraces C2C principles implicitly whole lifecycle carbon has to be regarded as well as demanding information relating to the toxicity of building materials.

Developers smiled at us and said they were lucky with Brexit that they didn’t have to do the taxonomy assessment. But a year later they called us because they wanted to sell the building to European investors

The taxonomy is currently in a transition period and will come into force fully next year. The passport provides “complete proof of EU taxonomy conformity, which is why we expect many people to come to us”, according to Pascal Keppler, environmental specialist for Drees & Sommer subsidiary EPEA.

Abdallah said the taxonomy could have an impact on construction in the UK, even after the country’s departure from the European Union.

“In the beginning, developers smiled at us and said they were lucky with Brexit that they didn’t have to do the taxonomy assessment. But a year later they called us because they wanted to sell the building to European investors. 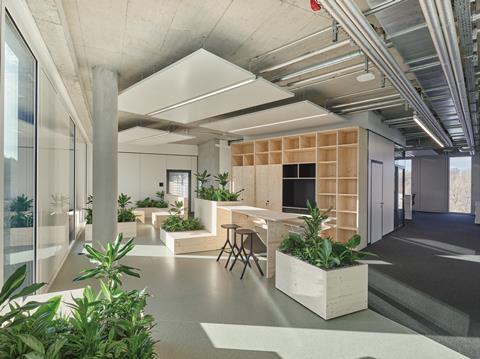 D&S is now trying to bring the passport to every project they work on and recently completed their first project using it in the UK.

As well as the passport, D&S has also developed a tool to help source materials that are compliant with C2C principles and with the new regulatory environment. The building material scout, developed in concert with another German company, Hoinka, is a database of more than 32,000 products with roughly 2,300 users.

D&S hopes that the tool, available for all to use, will reduce the resource costs associated with attempting to source green materials and encourage more contractors to make the switch.

Abdallah explained the difficulty of the process of sourcing green materials historically. “Ten years ago, when we did lead certifications, you would call manufacturers, ask them for data sheets, try to find right product on the data sheet. 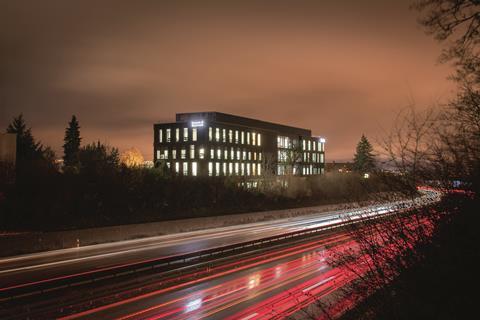 ”Then the information is not listed on the data sheet, so you call them again, and then discover that they don’t even know what kind of chemicals they have in the materials,” he said.

“The building material scout basically makes available information about the sustainability of building products,” said Keppler. “We currently usually don’t have that information available. Or, if it is available, it is usually not in a uniform format.

“This is why it makes it very hard and resource-intensive to actually check every building material that we now need to do for the EU taxonomy.”

Abdallah concurs: “I think the future of design and circular architecture is that you have digital tools which solve a lot of these unnecessary works of collecting information.”

Keppler said that, while OWP12 saw major improvements on the sustainability of facade and MEP designs, more can be done. “There are still things we will attempt to improve in future buildings, like the load-bearing structure, that is not modular in this case,” he said. 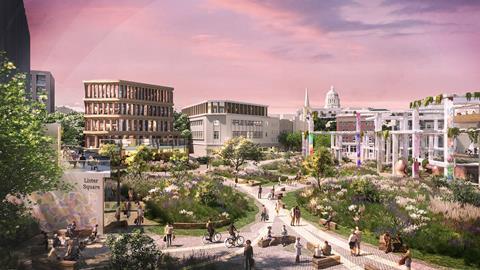 One such effort could be on British soil, with Drees & Sommer recently collaborating with Heatherwick Studio on a strategic feasibility study to redevelop an 80,940m2 site in the middle of Nottingham. Urban mining and the reuse of materials is the focus of the proposed regeneration of the demolished Broadmarsh shopping centre, with an ambition to reuse, upcycle or recycle 99% of materials from the area’s former buildings.

What is more, recent moves by the firm suggest that it may have an eye on increasing its UK workload. The company purchased the £20m-turnover AA Projects earlier this year, adding the UK consultant’s six offices – including in London, Birmingham and Manchester – to Drees’s existing two in the UK.

AA has a number of accreditations which Drees does not have in the UK and the deal will mean that we could very soon see these tools and principles in action on UK public projects in areas such as healthcare, universities and schools.