As the Institution of Civil Engineers delivers a worrying State of the Nation report on UK infrastructure, Building charts the changes that the sector believes should be prioritised by the next government

Last week’s State of the Nation report by the Institution of Civil Engineers painted a worrying picture of the UK’s infrastructure provision, and made a series of recommendations for the main political parties to consider as they work up their manifestos in advance of next year’s general election.

As reported last week by Building, the Institution of Civil Engineers’ (ICE) review found a deteriorating picture for parts of the UK’s key infrastructure - notably flood management and local transport - and flagged serious concerns about energy generation capacity. Despite the government’s National Infrastructure Plan, at the heart of many of these problems was the UK’s inability to make a credible long-term strategy for the construction of new infrastructure, around which the industry can gear up to deliver. As Building pulls together the responses to its own Agenda 15 campaign, what implications do the ICE’s findings have for the new government after next May?

Responding to the report last week, shadow infrastructure minister Lord Adonis said: “There is no substitute for leadership and taking policy decisions. One of the biggest failures in infrastructure policy over the decades has been the failure to take big decisions in a timely manner.”

This is clear from the report itself. One example is the area of energy generation infrastructure, where the ICE is critical of the government’s failure to follow through on the promise of its energy market reforms by implementing the secondary legislation needed to allow companies to make investment decisions. This lack of certainty was underlined a day after the report was launched when Ofgem confirmed its intention to launch a competition investigation into the utility suppliers, demonstrating the unstable political environment the ultimate clients of these
energy projects find themselves in. Former Atkins chief executive Keith Clarke, chair of the group that produced the report, simply said the government needed to “get on with it” over energy infrastructure.

This lack of clarity over big decisions affecting future infrastructure provision was mirrored in other areas: in flood management, the ICE found government needed to provide longer-term certainty over funding; for strategic transport, a national plan is required; in local transport, the ICE said city regions needed to get devolved powers to take proper control of spending.
And in the debate at the launch of the report, both Adonis and former deputy prime minister Lord Heseltine raised the struggles over HS2 and increasing airport capacity in the South-east of England as concrete examples of this malaise on the ground.

Steve Bromhead, UK head of infrastructure at EC Harris, says the report highlights a need to accelerate the investment that is already planned by making quicker decisions. “We are facing a crisis in sustaining energy in the UK and we have capacity constraints in our transport system,” he said. “Our inability to determine the right solution for aviation and the political posturing around HS2 shows how we struggle to plan ahead and make decisions quickly.” 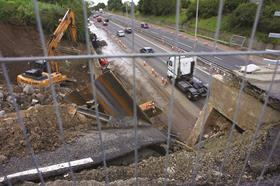 Bromhead says this shows the need to ring-fence infrastructure investment and take it “off of the political agenda” where it is subject to the frequent U-turns of vote-seeking politicians.
But anything that impacts on the lives of individuals to the extent major infrastructure projects do cannot expect to be taken completely outside the political realm. Currently the government attempts to depoliticise infrastructure investments by using supposedly neutral “return on investment” metrics to demonstrate the benefit of major projects to a suspicious public. However, the debate around HS2, which generates a relatively poor return under Treasury evaluations, has shown how this is not always successful, and the report finds a different approach is needed. Instead, it recommends finding a way to generate cross-party support around a vision for the country, which then dictates which investment should be prioritised. Clarke said: “The Treasury talks a lot about evidence-based policy criteria. But you can’t have evidence about what the economy is going to be like in 50 years’ time. The key is understanding the rationale of why you’re doing it in the first place.”

This view was echoed by Heseltine, who told the industry to “for God’s sake keep your slide rules in a drawer” when assessing which projects should go ahead. “All these figures are meaningless, yet this is the public debate. Infrastructure has got to reflect a hope and a vision.”

Adonis said the best way to achieve a long-term vision for the UK’s infrastructure backed by cross-party support was by implementing the proposals of Sir John Armitt, Olympic Delivery Authority chair. Armitt last year recommended the creation of an independent National Infrastructure Commission which would make 10-year recommendations to government to be approved by parliament, and his proposals are now Labour policy. “The ICE’s findings are precisely the reason why our party has recommended a National Infrastructure Commission,” said Adonis. “It should boost spending, as by making the nation’s infrastructure requirements clear it will make it harder for individual governments to dodge that.”

The ICE’s president Geoff French, said the Labour proposal would be welcome “if it was one way to turn the National Infrastructure Plan into a real plan,” but the body will not formally say if it supports the proposal or not.

Clarke said this was in part because of fears that implementing any major structural change would consign the infrastructure sector to three to five years of stasis while the reforms work through, throwing away any progress made. He said: “I don’t think bringing in a minister of infrastructure would work, because you lose two years with any departmental re-organisation. We’re most keen that the system we’ve got is made to work as well as possible. The main issue for us is not whether to have an Infrastructure Commission, but whether the government makes the decisions on its plate today.”

This is the sixth State of the Nation report compiled by the ICE - a process it repeats each time an election is looming in order to influence the debate. The ICE has agreed to allow Building to use its submission to inform Building’s own consultation on the shape of the industry over the next five-year political cycle - known as Agenda 15. This campaign, which has been running since January this year, has asked the industry to submit its answers to six key questions (listed, right) that we aim to use to inform the policies the next government will adopt towards the built environment sector.

The questions we asked you