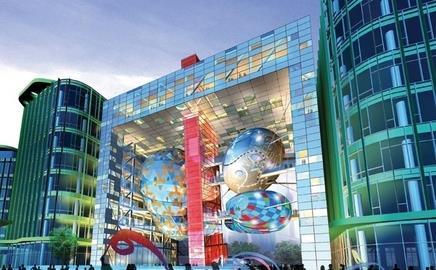 This is the new Shanghai International Cruise Terminal designed by Sparch, the Asian division of Archial Group. The 260,000m² mixed-use development boasts a centrepiece structure nicknamed the Shanghai Chandelier, a 40m-high glass-clad gateway. The scheme will be completed in May 2010.

It seems that Christmas has come early to Shanghai. A glazed portal garbed with floating baubles, this new development forms a triumphal entrance to the city. Though possibly at logger-heads with the nearby neo-classical Bund centre, this building is in fact very much in keeping with the kind of bling that we have come to expect from recent Shanghai architecture.

It may be spectacular but one cannot help but feel a certain disconnection between the building and its role as a transport hub. Much of the passenger services for the terminal have been buried deep underground, with space above ground being dedicated to recreation and a series of semi-outdoor balcony spaces. This is due to the fact that the building is a rather literal response to the Shanghai government’s recent decree to have 30 percent of all new builds dedicated to “breathing space.” Although a little out-landish for some, this building is bound to bring in the tourists. They just might need to wear sunglasses to admire it!

This is a striking design which looks futuristic, fitting with the ethos of Shanghai. The designers have created an eye-catching focal point for the docking cruise ships, and a tremendous vista for the passengers due to its scale, a fantastic first impression on arrival into the city.

The mixture of clear cut planes and organic shapes provides a remarkable contrast and the use of colour and differing glass opacity gives the structure a vibrant feel.

Jo Parsons is an architecture student at Nottingham Trent University.
Do you want to be a judge on First Impressions? Then email nargess.shahmanesh@ubm.com.
For the latest jobs in artchitecture and construction worldwide, and career advice visit Building4Jobs.