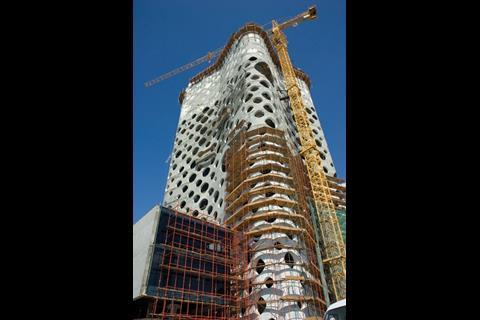 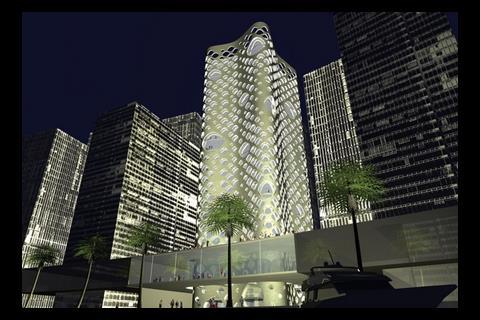 The architect wanted 0-14 to “be different from the usual slick buildings of Dubai”, as this visualisation shows. It may stand on its own for some time, as many of the surrounding buildings are on hold because of the credit crunch 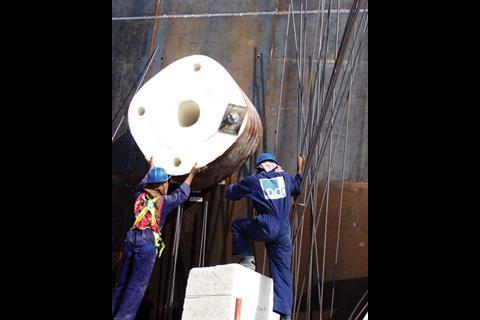 How the facade was built: the outer layer of formwork was erected 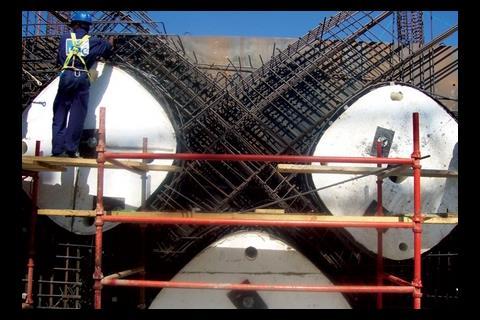 Then the polystyrene moulds for the holes were attached 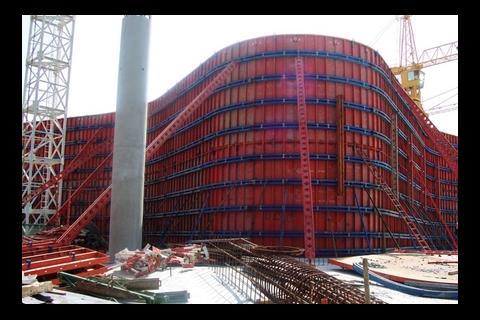 The rebar was at an angle, so had to be bent by hand to follow the curve of the building. The inner layer of formwork was positioned, then self-compacting concrete was poured 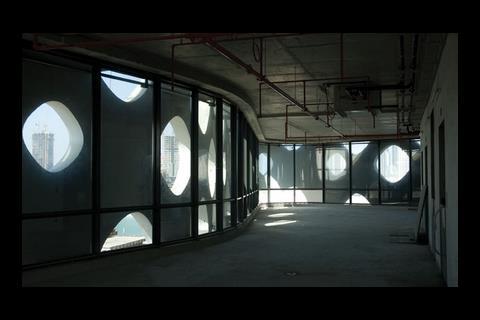 A second skin of glass sits 1m behind the facade. The large areas of solid facade and the double-skinned design help keep the building cool. 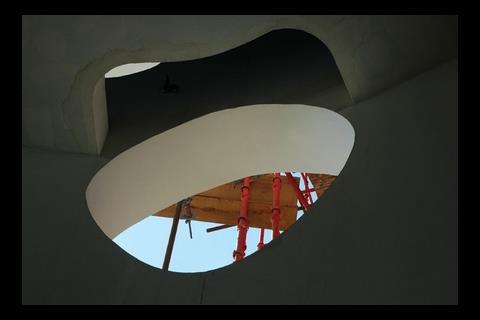 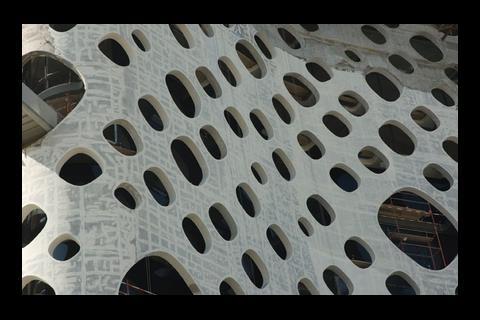 It turns out it’s 1,326. But don’t let the whimsical appearance fool you – this is one of Dubai’s most technically advanced and ecologically efficient buildings

If ever a building was needed to lift an ailing development, this is it. Most of the projects in Dubai’s Business Bay have ground to a halt because of the downturn, but that only gives this particular tower an even higher profile. It’s the most advanced building on the development and the most unique building in Dubai – in fact, there’s nothing quite like it anywhere in the world.

From a distance, the 0-14 tower looks like a giant chunk of sculpted Swiss cheese – except that the concrete facade has rounded corners, a curvaceousness accentuated by the sides of the building that are pinched in towards the core. The most striking element of the facade is that it is punctuated by some 1,326 randomly positioned, randomly sized holes. “We wanted the character of the building to be different from the usual slick, curtain-walled buildings of Dubai,” says Jesse Reiser, principal of New York architect Reiser + Umemoto. “We also wanted it to be column-free and have the solar shading as part of the building shell.”

This means the facade also supports the 22 floors of the building – the floor slabs span from the core to the facade without columns. Pulling this off was a unique challenge for the Dubai Contracting Company (DCC).

So why did Reiser design such an unusual building? The main motivation was for the external shell to act as a giant brise-soleil. The giant holes aren’t glazed; rather there is secondary glazing that spans between floors one metre behind the main facade. “Originally there was no gap between the exoskeleton and internal spaces, but detailing windows in the holes became monstrously complex,” explains Reiser. This also has the benefit of allowing cool air to circulate between the two facades.

The floorplates feature cut-outs where the holes span across them, which creates a stack effect because air can be pulled up the full height of the building. According to Reiser, the building should use about 30% less energy than standard to keep cool.

We wanted the character of the building to be different from the usual slick, curtain-walled buildings of Dubai

Unfortunately, all these holes and the curvaceous nature of the facade mean it is proving difficult to build. The building was originally scheduled to be completed at the end of this month but it won’t be ready now until August. “Most of the steel rebar in the tower is at a 45º angle rather than 90º because of the holes,” explains Jihad Choueiri, the project manager for DCC.

The holes may look random, but there are clear diagonal paths of solid structure which is where the rebar is concentrated. According to structural engineer Ysrael Seinuk, the curved nature of the shell makes for a very efficient structure that could be much higher than planned, but it does mean the rebar has to be curved to follow the sinuous shape of the building facade.

“We did a lot of research into the best method of construction as there was no precedent for this,” explains Choueiri. This being Dubai, there wasn’t much time, so while Choueiri was doing the research, work got under way on the building’s foundations – in February 2007. Choueiri had 10 months before construction started on the facade to work out how to build it. Initially DCC suggested building it conventionally. “It could have been done with conventional columns and cladding, which would have been cheaper and quicker,” says Choueiri. But the architect wasn’t having it. “It wasn’t about the cheapest way of building, but about a very pure form expressing the concept and we wanted to do it,” says Reiser.

So DCC focused on how to build it as the architect wanted. When it approached the big formwork companies to design the shuttering for the facade, it found they weren’t interested because they didn’t want to spend time developing such a specialised solution. In the end Choueiri found a Chinese company prepared to put the time in. He also had the same problem with the internal cladding, as this had to curve to follow the shape of the facade; again he found a Chinese cladding specialist prepared to take the job on. “They’ve done an excellent job,” says Choueiri.

After a lot of trial and error on full-sized mock-ups, DCC developed its construction method for the facade. The first step was to erect the outer layer of formwork, then position the moulds used for creating the holes. These are made out of a grade of expanded polystyrene that is strong enough not to compress under the weight of the concrete yet could be hacked out reasonably easily once the concrete has cured and the shuttering has been removed. Despite there only being five different sizes of hole, each one is unique because of the building’s curve. Where a hole straddles a floorplate a special semi-circular mould was used to create one half of the opening; the other half was constructed when the next storey was built.

In places we have had to bend the steel in three dimensions because of the curve. There is no machine that can do this so we had to do it by hand

With the moulds positioned, work could start on fixing the rebar. “In places we have had to bend the steel in three dimensions because of the curve,” explains Choueiri. “There is no machine that can do this so we had to do it by hand.” With the rebar in place the shuttering was closed and the concrete poured. Because the rebar was at a 45Þ angle there was no way conventional concrete vibrators could be used to compact the concrete, so a special high-density self-compacting concrete was used to ensure there were no voids in the finished concrete. The shell was 600mm thick up to the third floor and 400mm above this.

Unfortunately building each floor has proven much slower than a conventional structure. “When we started, the first floor took one month, then we got this down to three weeks and we are now down to 14 days,” says Choueiri. “In the programme we allowed just one week per floor.”

Conventional floors are constructed in two halves with the columns on one half and the floor slab on the other, which is fast and efficient. “Structurally we had to cast the whole slab in one go which changed everything,” says Choueiri. Not only was it much slower, it also meant twice as much scaffolding and more labour was needed.

The building is built up to the 18th floor, so close to being topped out: the glazing has already been installed lower down and the basement areas are finished. A special rail is fitted between the external shell heat and the glazing, enabling it to be easily cleaned. Once the structure is finished it will be painted white to help reflect the fierce Dubai heat. Will this be enough to keep the building cool? Choueiri thinks so. “We had some floors ready last summer and you could feel the difference in temperature from the outside, and that was without the aluminium window wall in place,” he says.

Dubai Business Bay will have more than 200 towers when it’s finally completed but 014 is guaranteed to always stand out from this particular crowd.