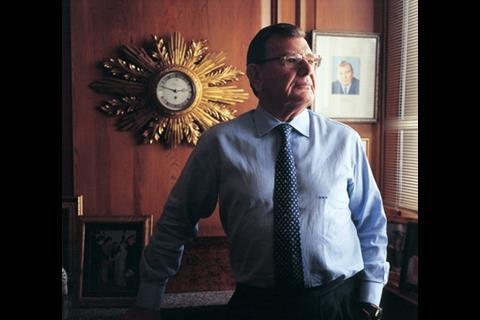 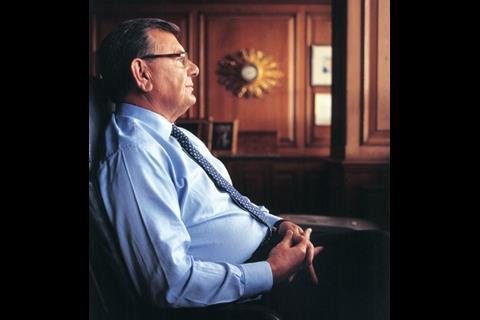 A tycoon, a predator, a convict, a philanthropist, a philosopher, a doting father ... even among the outsized characters who make up the property developing fraternity, Gerald Ronson is remarkable. Emily Wright found out just how remarkable

The receptionist at Heron International goes silent. She lowers her handset and peers over the rim of her glasses.

“Mr Ronson himself?” she asks. I confirm my meeting for the third time and she, very slowly, punches some numbers into her keypad. A raise of the eyebrow indicates a confirmation and I am shooed through to an upstairs waiting room.

At first, I don’t notice the figure looming over the sofa I’m perched on, but then a puff of cigar smoke engulfs me. “Hello Emily,” booms Ronson through the haze. “Come through to the office will you? Coke Zero, is that?” he asks, gesturing at the drink I’d been given. “Never had it myself. You want some vodka in it?” Before I can work out if this question is a joke, he is on to the next.

“What’s your circulation,” he asks as he slams the office door. The question takes me by surprise so I stutter for a moment. When I finally answer, he nods and says: “First mistake – you didn’t instantly know everything about your product. Sit down.”

Ronson is one of British construction’s most important clients, and one of British business’ most notorious figures. His company, Heron International, started as a furniture business run by his father. Ronson joined in 1954 aged 14 and became a partner in 1957. Then, by bringing the first self-service petrol stations to the UK in March 1966 and steering the business towards property development, he built it up to be one of Britain’s largest companies by the eighties.

But the success was short-lived. In August 1990, Ronson was convicted of conspiracy, false accounting and theft for his part in the Guinness share-trading fraud. He was fined £5m and spent six months in prison. Not long after, Heron collapsed with debts of £1.6bn owed to 82 banks and 15,000 bondholders.

The story of how he rebuilt a business that has developed more than 10 million square feet of commercial and retail property in the UK and Europe, could easily fill an interview. But, over the hour-and-a-half we are together, he also talks about his current developments, including the £500m Heron Tower in the City of London, his family and the “unfortunate” Guinness affair.

“I’ve never found anything easy,” says Ronson as he sits in his silver and mahogany office, puffing on the Cohiba Robustos cigar that smoulders throughout the interview. “It just comes down to differing degrees of complicated and difficult. But in life, you’ve still got to get off your arse and make things happen.”

Ronson’s most difficult period began in August 1990 when, after a 112-day trial, he was sentenced to a year in prison for his part in a conspiracy to drive up the price of shares in Guinness during a 1986 takeover battle for the drinks company, Distillers. Companies in Ronson’s Heron Group had bought £25m of Guinness shares during the bid and stood to receive a £5m payout for their support.

Ronson says he prefers to see the incident as a learning experience. “A man who makes the same mistake twice is a real fool,” he tells me. “When you have 50 years’ experience behind you, you’re better at protecting yourself – you don’t take as many risks.”

At the end of the day, there are greater things in life than building a tower, aren’t there?

But while he insists he has learned from his past, he prefers not to dwell on it. “When you’ve been through as much shit as I have, nothing keeps you awake at night.” It was this attitude, he says, that allowed him to rebuild his career after his prison sentence and the collapse of his business.

“There is no point looking back to unfortunate circumstances – they cloud your vision. You have to have the strength of character to plough on. That’s what I did. I decided to rebuild my business and my reputation.”

Ronson says that to this day he doesn’t quite know how he pulled his life back together. Certainly, he was helped by friends in high places. He borrowed money from Bill Gates, Rupert Murdoch, communications billionaire Craig McCaw and other wealthy acquaintances to accumulate enough capital to get back into the game.

But when it came to his reputation, he says he just took it one step at a time. Along with the other men involved in the Guinness trial, Ronson appealed the 1990 ruling in 1991 and 1994. Both attempts failed. But when they took their case to the European Court of Human Rights in 2000, the judges ruled that the original trial was in breach of the defendants’ human rights as the prosecutions relied on DTI interviews that obliged them to incriminate themselves.

However, in 2002 the House of Lords rejected this decision. Five law lords said that at the time the four were on trial, there was no law to make evidence obtained under compulsion void and so the verdict could not be trumped by later decisions.

Regardless of the opinions of the judicial system, in Ronson’s eyes his reputation is repaired: “I didn’t know how much I’d have to do to revive it. But I knew I would get there. And I have.”

But Ronson’s rise back to the top has not been without controversy. In 2005 he approached housebuilder Crest Nicholson, in which Heron had a 23.4% stake, about a possible takeover. Crest made it clear that the approach was unwelcome and that the price range of between 345p and 430p a share suggested by Heron was too low. Ronson refused to make a formal bid until Crest opened its books; Crest refused and gave Ronson five weeks to put in a bid. There followed a public battle between Heron and Crest’s board and when Ronson could not persuade the group to open its books he admitted defeat and walked away.

He is philosophical about this setback, as well. “It’s not something I see as being frustrating. If we could have bought Crest at a price we wanted, then we would have, but the price wasn’t right in the end.”

He admits that the company would have been a great asset to the Heron empire. “It’s a good group and it would have been an ideal fit with us. I was interested in buying a business that owned a large landbank. But it didn’t work out. You move on.”

Now that Heron has £650m under investment and has 150 buildings in nine European capitals behind it, Ronson is focused on ensuring his company stays at the top this time around. Aged 67, he shows no sign of slowing down.

I don’t want people telling me what they think I want to hear. If there’s a problem I want it on the table, I want to sort it, I want to know about it. Trust me, it doesn’t take me long to work out when someone’s bullshitting

His enthusiasm is matched by his confidence that Heron is leading the pack, particularly with the “six star” 44-storey Heron Tower in the City of London (pictured right). “I don’t want to be rude to my competitors but I think there are only four or five in this country that could rival us. The others simply don’t get involved in the detail like us. The product is very important and most developers overlook that. It’s about working out what people want out of a building and delivering it with detailed quality. Heron has a reputation of delivering what it says it will.”

And with increasing numbers of young executives earning ever larger amounts of money, what prospective office tenants want above all is an easier life. “They want services supplied for them,” he says. “People have busy lives. An office building like the Heron Tower won’t be just an office block – it will offer a concièrge service, drivers, a dry-cleaning service, a facility for booking theatre tickets, and all of the highest quality in the best location.” By this point Ronson is on his feet, striding around his office, gesticulating wildly and counting on his fingers the list of added extras his development will supply.

What do those who’ve worked with Ronson make of his business methods? David Connolly, a partner at Davis Langdon, has helped him on a number of projects, including the Heron Tower. “He does have a reputation of being aggressive, but he’s not actually. He is funny – in a dry way.”

Ronson is one of the most loyal people he has worked for, he says. “He is very clear in his instructions. If you don’t deliver, then that’s it really, but if you do, you can guarantee he’ll use you again.”

Ronson bears this out. “At the end of the day, people will do the job required of them or not. If they don’t, I don’t want to know. It’s not difficult working for me, but I know what I want and the standard of finish I expect.

“As long as we’re all on the same page and the product is to my standards, great. I’ve always believed in leading from the front.”

Working for him doesn’t suit everyone, he warns, because of his hard-nosed attitude. And there is one thing in particular that rubs him up the wrong way. “I don’t want people telling me what they think I want to hear. If there’s a problem I want it on the table, I want to sort it, I want to know about it. Trust me, it doesn’t take me long to work out when someone’s bullshitting.”

Ronson says he’s begun to think about how the company will continue once he is no longer at the helm. “I don’t plan on going anywhere soon, but you do have to consider what you are still capable of when you get to my age. Someone will obviously take all of this on eventually but I’m not thinking too much about that at the moment. It’s hard enough to keep up to date with what’s going on now – it’s Friday today and I can’t remember what I was doing on Monday.”

Looking back on his life, Ronson insists that he hasn’t been a great achiever. “No, no, no. I like challenges and I do my best but I wouldn’t say I’d done great things.”

I don’t believe him, and say so. He smiles and says: “Well, yes, I’ve rebuilt a business, repaired a broken reputation, created a thriving company, but at the end of the day, there are greater things in life than building a tower, aren’t there?”

Photos of Gail, his wife of 40 years, and his four daughters crowd his office. He has been peppering the interview with information about them, but now he has free rein to be the proud father. He takes me over to the largest table of photos and points his girls out. He is meeting one of them for lunch later that day and says he is pleased she will be there without her husband. “It’s nice to see them one-on-one,” he says. “It’s important to spend time alone, just the two of us, once in a while. I like to do that with all my girls.”

As time’s up, Ronson leads me round his office, pointing out awards, old photographs and certificates. He has changed out of his hard-nosed persona into a man in his late sixties, proud of what he’s achieved. As we leave the last certificate, Ronson says: “Not bad for a boy who left school at 14, eh?” He strolls over to one of his many ashtrays and finally stubs out the cigar. The message is clear. The interview is over.