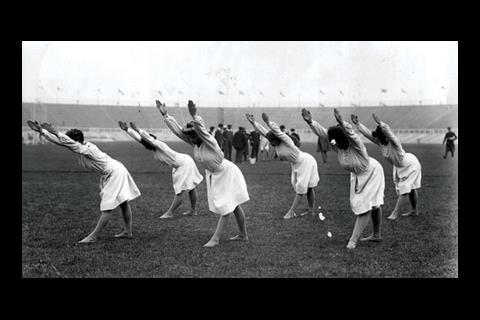 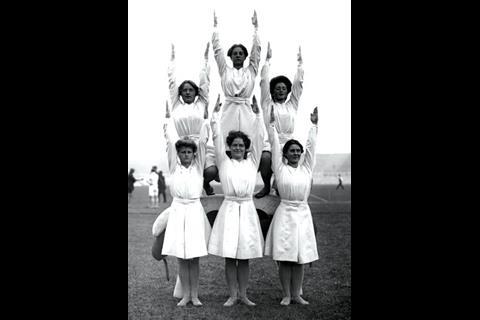 The climax of the floor exercise in the synchronised gymnastics 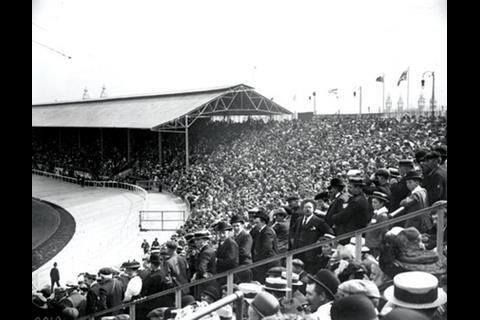 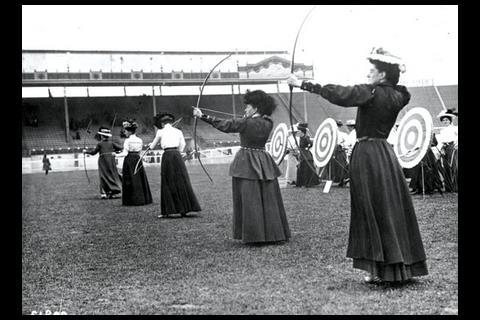 The women’s archery competition. Notice that the competitors have opted to ignore the butts and are firing at the spectators (which explains why there aren’t any) 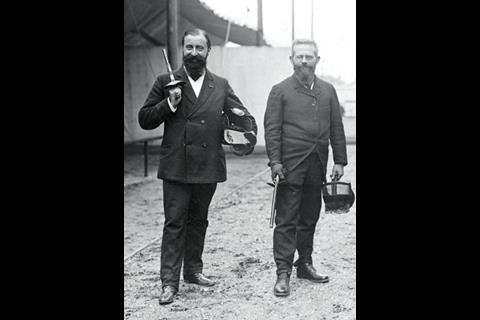 The two surviving members of the French duelling team

When London staged the Olympics 100 years ago, the delivery authority was a bunch of clubbable aristos, the developer was a Hungarian folk dancer and the athletes had to book themselves into local hotels. Nick Jones tells us what we have to learn from that approach

One-hundred years ago this summer, London hosted its first Olympic Games. In four years it will host its third. It might be assumed that there is little that one event can draw from the other, bookending as they do a cataclysmic epoch of world history that brought two world wars, the first moon landing and the advent of competitive beach volleyball.

And yet … as today’s Olympic organisers sweat and toil over their rapidly dwindling budgets, they could do a lot worse than study their 1908 counterparts. The Victorians and Edwardians were, after all, past masters at staging events that were the envy of the world, even if the point of them was not always immediately obvious. For the Great Exhibition of 1851, they built a 990,000ft2 crystal palace in Hyde Park. They then tried to better this at the 1862 Great London Exposition with a building topped by the two largest domes in the world, like two enormous soup bowls upturned over Kensington. The prospect of building a 65,000-seat Olympic stadium, therefore, held no fear for such people – a fact that George Wimpey ably demonstrated by knocking one up in 10 months for a total cost of about £85,000 (which admittedly comes out at a slightly higher figure if adjusted for 100 years of inflation).

So, if the Edwardian version of the Olympic Delivery Authority (ODA) were around today, what lessons would it impart to its descendant? Well, it would almost certainly suggest scrapping the athletes’ village, demand to know what the hell an aquatics centre was and introduce elephant rides. Yes, plenty of elephant rides. And that’s just for starters …

Lessons from history 1: Send for the idle rich …

There was, of course, no such thing as an Edwardian ODA. Where now we have not only that august body, but also the London Organising Committee of the Olympic Games, various legacy committees, the Commission for a Sustainable London 2012, the London Assembly and the Department for Culture, Media and Sport, in 1908 we had a loosely organised group of aristocrats who enjoyed fencing, shooting grouse and dining at a place called the Bath Club. There was no public funding, based on the fact that there was no public interest.

The fact that London’s first stab at the Games was left in the soft, underworked hands of a clique of upper-class sports enthusiasts was, of course, no coincidence. From the moment Pierre de Frédy, Baron de Coubertin, established the modern Olympics in 1896, the Games’ celebrated amateur ethos (that is, not paying anybody) was closely modelled on the English aristocratic sporting ethos (that is, not needing to be paid, because you’ve got lots of money and you quite enjoy doing these things anyway). So when in 1906 the Italians pulled out of hosting the Games owing to the untimely eruption of Mount Vesuvius there was only one place for de Coubertin and the International Olympic Committee to turn: the gentlemen’s clubs of Mayfair.

Not only did these chaps have plenty of time on their hands, their characters had been forged on the playing fields of the great English public schools, which de Coubertin greatly admired for perpetuating the Olympic ideals of fair play and manly sporting endeavour. They also knew the right sort of people were a whip-round needed to fund the building of an athletics stadium or two.

The amateur ethos had other benefits that today’s Olympic bodies might like to bear in mind, not least the fact that sportsmen were expected to pay their own way. Lord Howard de Walden, for example, made it into the fencing squad for the unofficial 1906 Games in Athens largely because he owned a yacht and could therefore give the rest of the team a lift. From an organiser’s point of view, this must have been a boon.

Also, because the members of the British Olympic Association (BOA) were all unquestionably first-rate gentlemen, their spirit of fair play was never called into question. This meant they could get away with murder. For example, the judges at the London Games were, entirely reasonably, all British. The event was also noteworthy for the introduction of racquets (a forerunner to squash) as an Olympic sport, despite being played only in Britain (we took gold).

Despite the involvement of the landed gentry, the 1908 Games still needed a great deal of funding. For this, Lord Desborough, the man de Coubertin asked to organise the Games, turned not to the London taxpayer, but to an émigré Hungarian folk dancer called Imre Kiralfy. Kiralfy was (as was the custom) busy organising an extravagant and largely pointless exhibition, on this occasion celebrating the fact that this was one of those rare moments in history when the British and French were getting along fabulously. The Franco–British Exhibition was proving tremendously popular with investors, and Kiralfy had accrued £2m with which he planned to build a Great White City in west London: 20 glorious palaces, reprising architectural styles from across both empires (which, upon completion, The Builder’s correspondent rather intriguingly described as being “too exclusively white, with a pie-crust appearance”). Before you could say “contingency budget”, Desborough had persuaded Kiralfy to throw an enormous athletics stadium into the mix in return for three-quarters of the Games’ gate receipts.

For the Edwardians, the place for an Olympic swimming pool was slap bang in the middle of the athletics track -regardless of the threat from passing javelins

Using a grand exhibition to pay for the business of staging the Olympics had already proved a popular funding mechanism, having been used at the 1900 Paris and 1904 St Louis Games. The ODA could do worse than revive it, not least because it provides lots of distractions for people who don’t like sport. The Franco–British Exhibition is an excellent template: it had elephant rides, a reconstructed Irish village complete with genuine peasants, and the Flip-Flap, a London Eye-type contraption that fired mildly perturbed Edwardians high into the air on two vast cantilevered steel arms to admire the views of Shepherd’s Bush.

4 Before you build a sports venue, think carefully about whether you really need it

The British did well not to follow the example of the French – who somehow failed to build an athletics track for the 1900 Games – but they were still admirably frugal in their stadium building. In fact, they only constructed one – the White City stadium. The idea of an aquatics centre would have baffled them. No, for the Edwardians, the place for an Olympic swimming pool was slap bang in the middle of the athletics track. This may seem ridiculous, what with the volatile nature of the English weather coupled with the threat from passing javelins, but perhaps no more so than spending £303m on a nice new pool.

This might prove controversial, but with the funding shortfall for the Olympic village currently estimated at £400m, the ODA might like to know that the idea of leaving athletes to book themselves into Stratford B&Bs has a precedent. In 1908, the BOA was only too eager to ditch the idea of communal living after the British team had endured some nasty experiences in Athens (the food was dreadful and their fellow competitors were a bit rowdy). For 1908 then, it decided not to bother, but instead to provide competitors with a handy guide to local hotels on arrival.

Even after the BOA had cosied up to Kiralfy and scrapped the athletes’ accommodation, the 1908 Games were still so inexpertly organised that they completely ran out of money a month before they were due to begin. There was understandable outrage in the press when it became apparent that the hosts would not even be able to stand competitors a decent lunch. But again there is a lesson in this for the organisers of 2012: after a desperate plea for cash from Lord Desborough was published in the Daily Mail, a widespread sense of patriotic duty caused money to flood in and the organisers were able to lay on five enormous banquets for visiting dignitaries, as well as a lavish ball. Hurrah!

To find out the 1908 Games panned out, read Rebecca Jenkins’ The First London Olympics, to which this article is much indebted