2
A tale of a tile
Focus

A tale of a tile 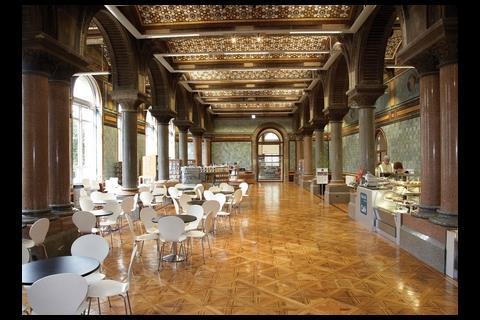 The walls and vaulted ceiling of the reading room are decorated with more than 40 designs and colours of glazed wall tiles, in a range of formats with intricate relief patterns 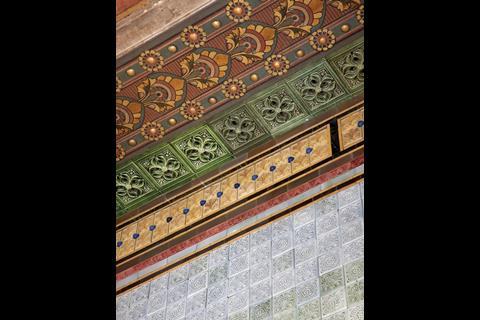 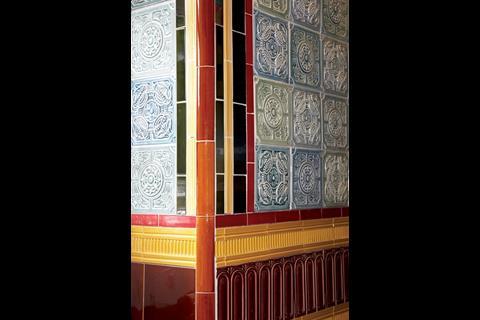 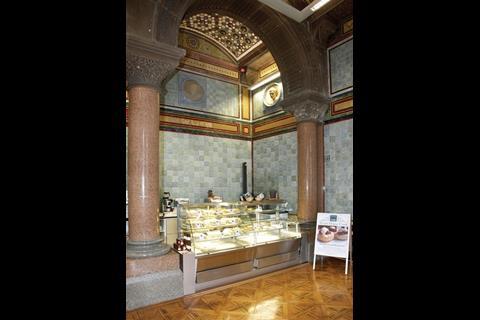 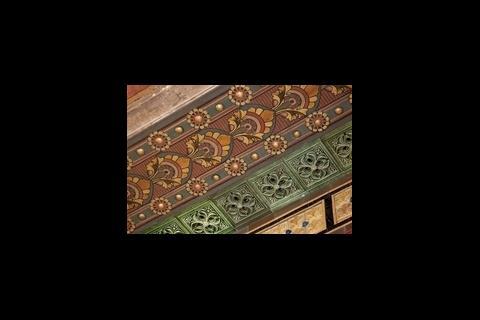 The compressing of clay dust to form a small tablet that can be baked and painted was a Victorian invention that became a Victorian obsession. Stephen Kennett tells us how one modern council set about emulating their achievement

They were not any old 120-year-old tiles, either. They were glazed, covered in intricate relief patterns in turquoise and blue, interspersed with bands of burgundy and aubergine. Some had intricate floral mosaics in gold and rose hues. In short, they were a magnificent example of the Victorian era, with all its excesses – and they covered the walls of a 80 × 40ft room.

As you might expect, many of them were missing and damaged, but the council decided to restore the room to its original glory and open it to the public. The obstacle was finding replacements for the missing ones.

The process of commissioning and recreating them fell to consultant Heritage Tile Conservation and specialist tile maker Craven Dunnill Jackfield. In the Victorian era, tile-making was in its heyday. The invention of a way to compress clay dust in the 1840s made it possible to mass-produce tiles that could be decorated with colourful glazes and relief patterns. Craven Dunnill Jackfield was natural choice to make the replacements because it employs the same techniques now.

For this project the company produced a total of 15,000 hand-made replacement tiles in 46 different designs and colours.

Work began with a detailed survey of the reading room from which CAD drawings of the tiled elevations were produced. These were used to identify damaged and missing tiles and to produce a schedule of tile types and numbers. “It’s probably one of the largest interior tile jobs we’ve ever worked on,” says Jeremy Southorn, director of Heritage Tile, which undertook the survey.

Samples of each of the 46 different types of tile were removed so moulds could be made and colours matched. “We usually try to get one of every tile we are copying, or a fragment or a photograph,” says Mark Harris, production manager at Craven Dunnill Jackfield.

They would have been fired in bottle kilns, fuelled by whatever they had lying around that would burn

From the samples, two plaster resin master moulds were made. Many of the original tiles had a relief design, but the glaze build-up on them meant the fine definition of the patterns was lost. “Over time the working moulds become worn and lose their definition,” says Harris. Moulds had to be carved out by hand, a process that took the best part of a week.

One of the biggest challenges was recreating the colours, since glazes have changed significantly since the original tiles were made. “They would have been fired in bottle kilns, fuelled by whatever they had lying around that would burn,” says Harris. “This meant there were hot and cold spots inside the kilns, which resulted in a variety of colours.” Inconsistent ageing had accentuated these variations.

Craven Dunnill Jackfield recreated the glazes using copper, cobalt and iron pigmentation, which were all used in Victorian times. The only exception to the traditional approach was that in the glaze for the yellowy orange tiles, a substitute had to be found for cadmium as this substance is banned today because of its toxicity.

To recreate the diverse tones, batches of tiles were hand dipped in the glaze for varying periods before being fired for another two days. Large volumes of tiles were required, so 40-50 working block and case moulds were made in harder plaster. The tiles were cast in batches of 50 and left to dry for four to five hours before being fired in a kiln for up to five days, with the temperature gradually increased and lowered to prevent cracking. After cutting and trimming to size, they were ready for glazing.

All the badly damaged tiles were cut out using diamond-tipped circular saws. Loose tiles were set aside for reuse. After the delicate task of refixing and grouting was complete, all the tiles were cleaned. The tiled hall is once again open to the public, which goes to show it is possible to bring a long forgotten building back to life.

The history of a tile maker

Craven Dunnill Jackfield employs many of the same machines, glaze mixtures and decorating techniques that the Victorians used. Its factory at Jackfield, Shropshire, was built in 1863 and became Craven Dunnill in 1871. It was one of the most advanced tile factories of its time and made encaustic and geometric floor tiles, faïence mosaics and decorative wall tiles.

The factory closed in 1951 and relocated to Bridgnorth where it became a tile distribution business. The Ironbridge Gorge Museum Trust established the Jackfield Tile Museum in the early 1980s and when Craven Dunnill purchased the works in 2000, Craven Dunnill Jackfield was formed. It now produces handmade wall and floor tiles to order, specialising in restoration projects.