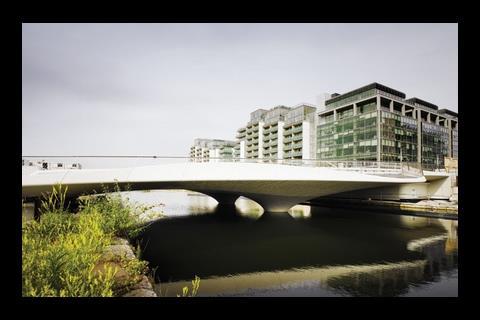 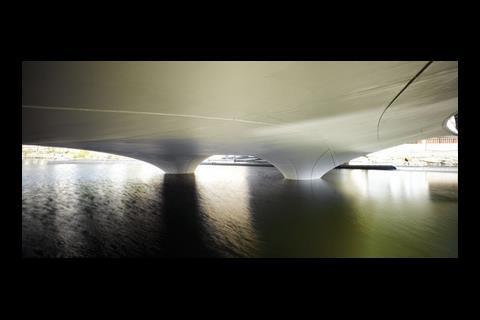 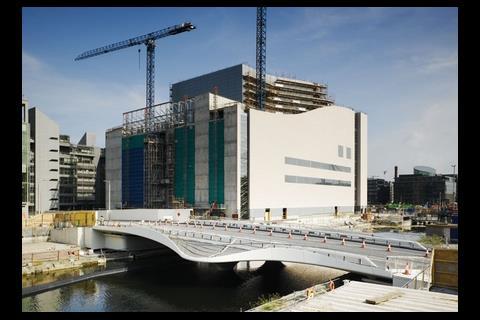 Amanda Levete’s first project since she left Future Systems, the firm she ran with her late husband Jan Kaplicky, is a sculptural bridge in Dublin that lays the way for a new direction in her career

Although the recession has all but put paid to Dublin’s boomtime proposals for bustling city quarters and towering skyscrapers, bits and pieces of notable architecture are still emerging. The latest to complete is Amanda Levete Architects’ bridge over the Royal Canal at Spencer Dock – a sculptural ribbon of concrete to rank alongside the famous Ha’penny Bridge and Santiago Calatrava’s James Joyce bridge on the Liffey.

The significance of Spencer Dock bridge to Amanda Levete is no less than it is to Dublin. It is the first project completed by her new practice, Amanda Levete Architects, which split from Future Systems earlier this year. Levete reveals that she and the late Jan Kaplicky, her former husband and co-founder of Future Systems, had been working separately for the past five years, but this is the first of her jobs to be completed. “It marks a starting point,” she says.

Like on all infrastructure projects, there were design restrictions. Built to accommodate two lanes of traffic and two tram lines, the 40m bridge, like O’Connell Bridge, has to be almost as wide as it is long. “It doesn’t have the elegance of a traditional bridge,” says Levete. “The question was, how do you deal with that?”

The answer was to create a piece of sculpture. Created out of elegantly formed white concrete, the bridge flows sinuously from one side of the canal to the other. At the mid-point on each side the concrete curves outwards to create an open space, like wings or fins. Levete describes it as a “piece of landscape”, linking to the surrounding landscape designs of French architect Agence Ter. “There was no opportunity for structural acrobatics,” says Levete. “We wanted to celebrate concrete as a material.” The dazzling white of the bridge was created by using white limestone and white cement in the concrete mix.

The level of formwork required to create the bridge was highly advanced, says Peter Feldman, one of the project architects. “We wanted to keep as large a degree of control of the geometry as we could,” he says. “The key was to research as much information about it as we could, so that tenderers would not be put off by the complexity.”

The practice experimented with different types of polystyrene formwork to cast the concrete. After exhaustive testing, a high-density polystyrene coated in resin was used to give it a smooth finish. Levete says the texture of the concrete was extremely important, as visitors pass on the towpath underneath the bridge as well as over it. “We wanted to create a stark contrast between the dark water of the canal and the white of the concrete,” she says. “You get real play of the reflection of the water on it.” Joint lines in the concrete emphasise the geometry.

There was no opportunity for structural acrobatics. We wanted to celebrate concrete as a material

The structural complications didn’t end with the scale of the bridge. The insitu concrete deck is extraordinarily shallow – just 600mm thick in parts – and the architect had to work closely with Arup to make sure the drainage systems could be embedded in it without disrupting the design. Troy Burden, a director at Arup, said an “eye-opening” level of collaboration on 3D models ensured that design and engineering were expertly intertwined.

Levete agrees, saying that the project team had overturned concerns that the designs would be problematic. “Everyone really bought into the concept, and it was completed this year on time and slightly under budget.” Although the work of Levete and her team is finished, the bridge is not quite complete – in a few weeks the Dublin Docklands Development Authority will begin work on the tramlines. It will open to the public next year, at the same time as the Agence Ter landscaping.

So what does this bridge tell us about the emerging style of Amanda Levete Architects when compared with that of Future Systems? The shades of blobitecture – surely up there with “starchitect” as one of the least popular portmanteau words in modern architecture – are still present, but have been morphed into something more lithe, shapely and (dare I say it) commercial. The trouble with the “geometricism” movement heralded by Future Systems is that many of its challenging concepts remain just that, rather than completed buildings.

It’s encouraging then, that Levete’s first completed piece of construction out of that practice’s shadow is not an enormously expensive bank headquarters or Dubai skyscraper but an elegant piece of civic architecture, delivered within a public sector budget. As the director herself puts it: it’s a starting point.