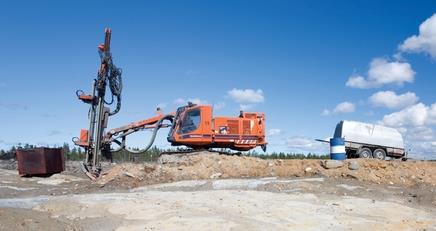 M&E A Dutch method of storing all the energy required to heat and cool a building deep underground is coming to the UK. Stephen Kennett finds out how it works

You may not have heard of it, but aquifer thermal energy storage could be about to become big news. This approach to heating and cooling is in widespread use in the Netherlands, where it was pioneered in the nineties, and is now being used on the redevelopment of the Dartford campus of North West Kent College, one of the largest education projects to be funded by the Learning and Skills Council. Fulcrum Consulting, the firm behind the proposals, estimates the system could cut carbon emissions from the campus by 30%. Here we give a guide on how of underground thermal energy storage (UTES) works.

UTES is the process of storing excess heat energy from the summer months that can then be used for heating buildings in the winter and vice versa. It is the creation of this interseasonal heat store that differentiates UTES from more conventional ground-source heating and cooling systems such as ground-source heat pumps.

So how does ATES work?

ATES needs an aquifer below the site. Two boreholes are sunk anything up to 150m deep, to create a cold well and a warm well. In the summer months water is extracted – typically at a temperature of 7-10ÞC – from the cold well and passed through a heat exchanger to provide direct cooling to the building. This process warms the water to around 17-20ÞC, which is then rejected into the warm water well. This warm water is stored here until later in the year when the process is reversed and water from the warm well is extracted, passed through a heat exchanger connected to a heat pump and used in the building. The temperature of the ground water that has passed through the heat pump falls to around 7ÞC and is returned to the cold well.

In the ideal set-up the heating and cooling loads will be balanced and there will be relatively little overall temperature change in the aquifer. However, if the loads aren’t balanced, additional heat or cooling may be required.

What stops the heat from escaping?

For ATES to work there needs to be a suitable aquifer. The main requirement is that the water in the aquifer must not be not flowing too fast; it it is, it will wash the warm water away. Where there is relatively small movement the heat will be held within the aquifer.

Isn’t the temperature too low to heat a building?

The water temperature generated by the heat pumps is about 45ÞC. This is lower than a traditional boiler-fed system, but according to Dave Selvage, senior associate at Fulcrum Engineering, it is sufficient if the building is constructed to high standards of thermal insulation and airtightness.

How do you know if a site is suitable?

The only way to establish this is by carrying out a feasibility study. The first step in determining this is a desktop study to understand the site’s geology. This opens the way to sinking a test bore to establish precise thermal and hydrological characteristics such as how quickly the ground water flows and in what direction; this will determine where the boreholes are sunk and how far apart – the design needs to avoid any “contamination” between the hot and cold wells. Armed with this information, the detail design can be carried out.

Planning permission isn’t required but the Environment Agency will have to be consulted as it is responsible for management of ground water and the issuing of extraction licences. One of the advantages of ATES is that there is no depletion of the water in the aquifer and any overall change in temperature should be relatively low. However, an impact assessment on how the heat fields interact with surrounding aquifers will be needed.

Is ATES recognised as a renewable technology?

According to Selvage, although an ATES system uses grid-derived electricity to power circulation pumps and heat pumps, the overall process is so efficient that it is recognised as a renewable technology and would comply with local authority renewable targets such as the Greater London Authority’s 20% on-site requirement.

How efficient is it?

Typically a conventional chiller would achieve a coefficient of performance (CoP) of three – that is, for every three units of cooling energy produced, one unit of electricity is consumed. A heat pump typically achieves four; however, winter CoPs in an ATES system can exceed this figure as the water sourced from the ground is warmer thanks to the store of energy over the summer months.

The largest efficiencies come in the summer cooling mode as the only energy expended is on running the circulation pumps, achieving aCoP equivalent to 25.

At the Dartford scheme, taking into account the energy-efficiency measure built into the building fabric and design features such as daylight-linked lighting, it is anticipated that carbon emissions will be reduced by about 610 tonnes a year from the Part L requirements. About 225 tonnes of this are attributable to the ATES system, a reduction of about 30%. The payback of the system is expected to be about 15 years at current fuel costs.

So how does a BTES system differ?

Whereas an ATES system uses an open loop – where water is pumped from one borehole and rejected to another – the BTES system uses a closed loop. Two sets of boreholes are sunk, into which is inserted a closed loop of plastic pipe. One bank of boreholes is used for storing heat and the other for storing coolth. The energy is transferred between them by the water in the pipe. While ATES can only be used where there is a suitable aquifer, BTES can be used anywhere.