2
Archetype: A touch of glass
Focus

Archetype: A touch of glass 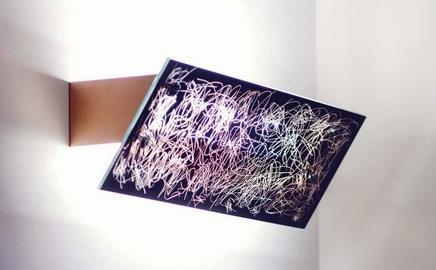 For the project, partner Howard Meadowcroft wanted a lighting system that would reflect the firm’s history of environmental design. He turned to Nick Grant of Elemental Solutions, who had fitted the green air extraction in Archetype’s WCs, and Colin Chetwood, an artist who etches on mirrors. The results was a unique, home-made, low-energy lighting design born out of an unlikely combination of skills.

So why did you decide to design your own lighting?

Meadowcroft We just weren’t taken by anything we saw on the market. Most of the fixtures seemed over-designed. We felt we wanted a lighting effect and not object-based fixtures, and to have something that we knew was recyclable.

Grant I have a background in engineering, but am a consultant in sustainable water supply and waste management. Howard was talking about the lighting and I thought that what they needed was something bespoke and technically efficient. Along with Colin, who had been experimenting with the use of mirrors in his work, we thought that we would try and come up with something ourselves.

How did you come to work together on the project?

Meadowcroft We had employed Nick’s firm, Elemental Solutions, to deal with our on-site waste-water management, which didn’t just involve the design of the reed beds, but also the specification of an air flush extraction system in lieu of an extractor fan, using a small motor to draw air out through the toilet itself. It works because it means that you are extracting foul air at source.

Grant We hadn’t met up before. I get the majority of my work through the Association for Environmentally Conscious Building (AECB) and we got in touch through that network. I’d helped with their water management, and the lighting project followed on through that.

Was the lighting modified through the design process?

Meadowcroft The basic idea came from Nick, who was keen on using low-energy lights and a reflector. There are three designs, which we arrived at together, all of varying complexity. The simplest is just a continuous strip of timber used as a baffle for a wall uplighter. Another is a ceiling-fixed aerofoil formed from the plywood sheets that our windows came delivered in. The third is Colin’s mirror reflector with its visible etched pattern on its back face.

Grant We were starting from scratch with this, and it really was a case of trial and error. I fabricated the basic designs as prototypes, and we would test them out by literally hanging them up in the barn and seeing how they performed. The emphasis was on quality and location.

How did you find it worked as a professional relationship?

Meadowcroft We obviously commissioned and paid Nick and Colin to prototype and work up the solutions to a finished design. From that, they did a costing for the fittings and agreed the budget. That was our only contractual arrangement. They came in with a low price – the mirrored fixtures came in at about £180 a piece, and everyone who visits the office thinks they look great. I doubt they’d do it for that price again.

Grant With jobs like this you always end up underpricing them, as you’re prepared to go the extra mile. It was a fluid arrangement. The price did go up, but we just took that on board – usually, that would be a recipe for disaster. We did have problems with the adhesive due to local stresses, but it was designed to be simple to construct, and to repair.

Would you do it again?

Meadowcroft Definitely. But Nick’s getting busy. They have since been commissioned for designing and installing lighting for the Green Shop in Stroud, so they’re going through the same process with them.

Grant I got a lot out of the project moving in a new direction, but still working sustainably. With the AECB, a lot of work comes by word of mouth. Along with the other sub-movements that characterise self-build, it’s a great organisation, because this is the kind of collaborative stuff that comes out of it.