Bankside: Have you met the Tate’s new neighbours? 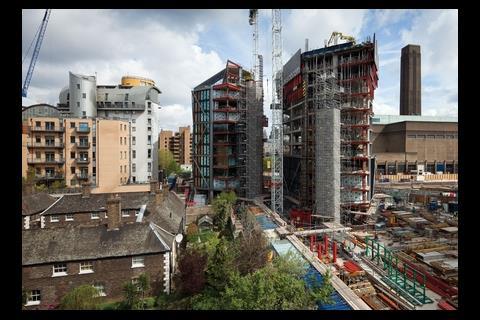 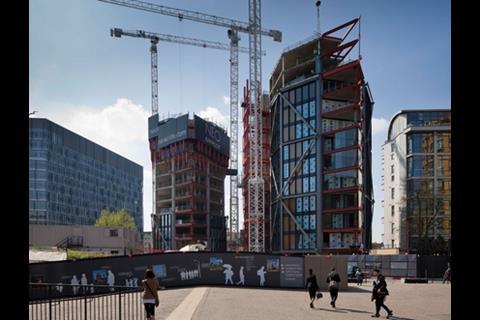 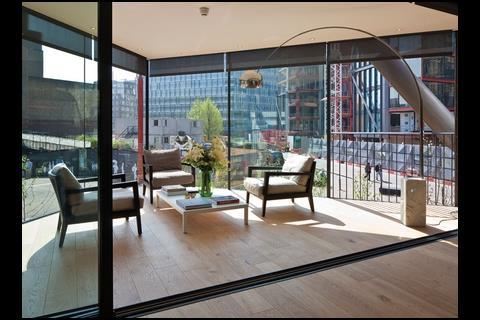 Once snubbed as the poor relation of the trendy South Bank, Bankside has been transformed over the past decade by ambitious design. Now, finally, the residential sector is moving in

Over the past decade, London’s Bankside has proved conclusively that urban regeneration can be culturally, and not solely commercially, driven. Until the nineties, Bankside was considered a poor relation of the more stylish South Bank to the west – a deprived, neglected void slumped between Blackfriars and London Bridge. But three major developments – the Tate Modern, the Millennium Bridge and Shakespeare’s Globe – transformed the district forever by placing high-quality design at the centre of its ambitious urban renewal strategy. Large-scale commercial schemes followed, most visibly Will Alsop’s Palestra Building and Allies & Morrison’s sprawling Bankside 123 office development. Now, as another nearby Allies & Morrison scheme nears completion, it seems the residential sector is the latest beneficiary of Bankside’s transformation.

Just south of the Tate Modern in a cluster of sites around Southwark Street, four new housing developments are creating a residential quarter on Bankside’s southern edge. Three of them are located right next to each other in or around Dolben Street – an unassuming backstreet – while the fourth is a stone’s throw away directly opposite the Tate Modern’s planned “pyramid” extension. The location of this new quarter is significant for a number of reasons. First, it straddles the route tourists and art lovers take when making the pilgrimage from nearby Southwark tube station to the Tate Modern. It was inevitable that the jackpot combination of pedestrian footfall, good transport links and cultural amenities would increase local property values and arouse commercial interest.

Second, it is significant that at least three of these developments are situated some distance from the river. Historically, Bankside’s fortunes have relied on its pivotal (and commercially lucrative) location beside the Thames. The fact that this new wave of activity is taking place away from its prominent waterfront is testament to the strength of the economic ripple generated by the success of Bankside’s cultural regeneration.

Third, the new quarter is located in an area whose rich industrial heritage is no longer dismissed as a symbol of economic decline, but is regarded as an instigator of high-quality contemporary design. Dissected by railway lines, treeless backstreets and sparse, brick frontages, there is a robust, utilitarian quality to the area’s architectural fabric that is far removed from the manicured riverside walkways. Small industrial units, Victorian warehouses and a labyrinth of railway arches all help give this quiet corner of Southwark a textured and multi-layered urban character that developers appear eager to embrace.

These four developments fit comfortably into Southwark council’s wider regeneration plans for the entire Borough, Bankside and London Bridge neighbourhood. According to the council, there has been no specific intention to re-brand this particular zone as a landmark residential quarter, but it admits that it is providing advice to developers as to the mix of uses to create a successful cultural quarter. Its desire, it says, is to promote “ambitious design”. Guy Harris, project architect of the Bear Lane development, maintains that having this critical mass of high-quality schemes “adds a value uplift to each development as well as to the wider area”.

Actually, something much more radical than that is going on. Stand in front of the White Hart pub to wonder at the dynamic new structures that now encircle it, and what’s clear is that this small corner of Southwark is quietly trying to transform Londoners’ attitudes towards inner-city urban living.

This residential development (pictured, above right) is arguably the one poised to make the greatest impact when complete. Situated directly behind the Tate Modern, Neo Bankside is an assortment of four hexagonal pavilions ranging from 12 to 24 storeys and providing 197 apartments. Thirty-two affordable apartments will be provided in a six-storey fifth block. Designed by Rogers Stirk Harbour & Partners for Native Land, the first phase is scheduled to complete later this year. Each pavilion is expressed as a glazed vertical shaft encased behind a vast steel exoskeleton of structural cross-bracing. A shaft of winter gardens is also “suspended” from the tip of each block, its lightweight decks supported by a tracery of suspended props and hangers whose fragile delicacy contrasts sharply with the rigid muscularity of the skeletal bracing.

Despite the uncompromisingly contemporary aesthetics and RSHP’s trademark external lift shafts and structural expressionism, like the other three schemes, Neo also makes heavy references to local character and materials. The pavilions possess an undeniably industrial and mechanical feel and the colours employed – oxide red steel sections to match Blackfriars Bridge and brown timber clad panels to relate to Tate Modern – also reference local fabric. Set to rise behind the familiar squat silhouette of the Tate Modern when viewed from the Millennium Bridge or Thames North Bank, Neo will brashly announce this resurgent quarter to the rest of London.

Of the four sites, the only one that is complete and occupied is Panter Hudspith Architects’ Bear Lane development for Galliard Homes. This mixed-use scheme includes 89 flats and commercial units on the ground floor. Completed in 2009, the eight-storey development would occupy the full extent of a triangular urban block were it not for the retention of the historic White Hart pub on its southern tip. Conceptually the building seeks to reinterpret the European model of the high-density apartment block in a manner that challenges the traditional terraced notion of inner-city London urban dwelling, yet retains strong contextual empathy.

It achieves this by appearing to be comprised of a series of randomly stacked vertical boxes arranged to form a “ziggurat” that teeters over the surrounding streetscape. Not only does this modular articulation help diminish the mass of the building but, when viewed in elevation, it can almost be mistaken for a grid of traditional terraced frontages placed on top of each other. However, despite this unequivocally contemporary approach, by employing brick throughout the building and by emphasising the verticality of its facades, the architects are in fact subtly reflecting the grain and texture of the local neighbourhood. The building’s stark, rectangular geometry and its solid, durable form, (exacerbated by several expanses of windowless brickwork) also clearly engage in the utilitarian aesthetics of its local industrial heritage.

Directly opposite Allies & Morrison’s student accommodation and on the other side of the Bear Lane building lies the smallest of the four residential developments. Designed by south-west London architectural practice Association of Ideas for Dolben Group LLP, (a joint venture formed between architect and developer) this six-storey curved tower uniquely allocates one flat to each entire floor. A single commercial unit also occupies the ground floor. This modest mix allows for the realisation of a slender, prow-like form that contrasts sharply with the rugged orthogonal mass of Bear Lane next door. But it is its distinctive colour that demands most attention, with its glazed green bricks enlivening the local streetscape and justifying the development’s name of The Greenhouse SE1. The building is scheduled for completion later this year.

Next to the Bear Lane development lies Allies & Morrison’s Great Suffolk Street student accommodation scheme, one of several projects the practice has designed in the area. This 14,021m2 mixed-use development for the Unite Group provides 4,056m2 of office and retail space as well as accommodation for 230 students grouped into either studios or flats. Though scheduled for completion this August in time for the 2010/11 academic year, its principal eight-storey frontage is already clearly visible from Great Suffolk Street. Initially the facade appears to be a signature Allies and Morrison combination of fair-faced brickwork and aluminium rain screen cladding grouped into identical bays. Yet the materials and massing of the block have been closely informed by their surrounding scale and context.

Furthermore, this frontage cleverly conceals the fact that the development actually comprises three distinct buildings, each one designed to specifically relate to its particular streetscape. A six-storey office block is located to the north of the site on Lavington Street and a 13-storey tower is situated behind the main brick building. The tower is clad in storey-height aluminium panels vertically offset to form a metallic, chequerboard effect. Set back from the street and adjacent to a nearby railway line, it emphasises its different context and the local visual diversity by appearing wholly distinct from the remainder of the development.