BIM usage survey - what can help non-users get with the programme?

This year’s BIM usage and attitudes survey by NBS reveals continued progress in the use of the technology. But what can help the final 26% of non-users to get with the programme? Debika Ray reports 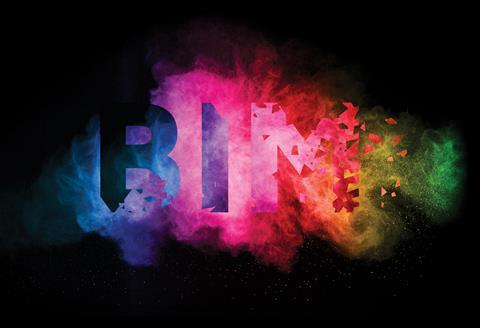 BIM is on the rise – still. Its use across the UK construction industry continues to increase, despite persistent worries that the government is failing to follow through on its 2016 BIM mandate, according to the latest annual report by construction technical information provider NBS.

Of the 808 people who responded to the survey, which was conducted in the first quarter of 2018, 74% said they were using BIM – an increase of 12 percentage points since last year. This is the highest year-on-year growth since 2014 and reflects a dramatically different construction industry to 2011, when NBS started collecting this information and just 13% of respondents said they were using BIM.

“No matter how you define BIM, adoption rates have steadily increased,” says Stephen Hamil, director of research and innovation at NBS. “This is a fantastic story and the UK industry is a leader in influencing global standards.” According to the report, NBS expects that more than 90% of the sector will be using BIM within the next three to five years.

Last year’s survey contained something of a shock: a year after the government made BIM Level 2 compulsory on all its projects, there were signs that it was not living up to its own expectations – 51% of respondents said that government departments were not enforcing the 2016 mandate compared with a mere 9% who believed they were. If anything, the situation now seems worse – 62% said the government was not enforcing the mandate and only 47% agreed with the statement, “I think the government is on the right track with BIM”, compared with 51% last year. Only 41% of respondents think the government’s 2016 BIM mandate initiative has been successful and less than one-fifth (19%) agreed with the statement “the construction industry is now delivering on the government’s 2016 BIM mandate”. It’s not that the industry feels the aims of the initiative are wrong, but rather that not enough is being done to promote, enforce and embed BIM across these public projects.

But the experts Building spoke to said that it would be wrong to be discouraged. In fact, Ben Wallbank, BIM strategy manager at construction software company Viewpoint, says the continuing increase in BIM use should be seen as something of a rebuttal to last year’s fears – adoption has not plateaued, despite these difficulties. “Would one expect a massive change in opinion from year to year? Probably not,” he says. “The reality is that government bodies are beginning to address pretty well what it is to be a good BIM client and how to procure Level 2 BIM projects properly, and the documentation going out to market is now a lot better. Things are moving forward – just perhaps not as fast as some might like.” 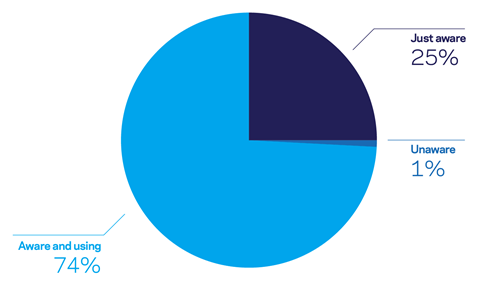 The reality is that, since 2016, BIM usage across the industry has risen by 20 percentage points – despite the fact that it’s a massive job to educate and transform a sector as complex as construction in such a short time, and building projects have a gestation period of several years (Although it’s important to bear in mind that architects are overly represented – compared with other types of construction firm or profession – among the respondents to this particular study and that it relies on self-reporting). According to this year’s NBS survey, only 27% – less than last year’s 33% – of respondents said they used BIM on only a minority of their projects and when asked if they would continue to use BIM or adopt it in future, 97% said they would be using it in five years and 91% said they would in one year’s time.

Most respondents already believe BIM can bring down costs (72%) and time (65%) spent on projects and, although fewer are confident in its impact on helping to meet environmental targets, many (46%) are.

Wallbank points out that there may have been a pause in momentum as the government’s funding to facilitate BIM Level 2 adoption ended in 2015, and private sector bodies stepped in to take that place. His present optimism reflects the fact that the BIM sector is now becoming less fragmented. An industry body, the UK BIM Alliance is now overseeing Level 2 BIM adoption, technological development and research across much of the country and industry, after subsuming several smaller and regional organisations with disparate functions. It is working alongside the Centre for Digital Built Britain, a new institute at Cambridge university that was set up this year by the business department to take responsibility for the government’s BIM initiatives. “I am quite hopeful that some of the concerns about lack of support can be addressed by these measures, which are just beginning,” Wallbank says.

There are also signs that the industry is starting to be more proactive – despite the NBS figures reflecting a continuing pessimism about clients’ understanding of BIM (69% of survey respondents said a lack of client demand was one of the main barrier to progress). “Some large private clients are ahead of the public sector, especially ones that do repeat work such as the hotel industry or big supermarkets and retail chains, as they want to standardise processes and drive down costs,” Hamil says.

“Maybe one or two years ago, people saw BIM as a way to do more co-ordinated drawings and improve clash detection, but now they are seeing it as more than that – focusing on transparency of data, and documenting things in a clear and standardised way, so they can verify the quality of workmanship.”

Wallbank also believes the greatest missing link in the BIM eco-system is the lack of a clear industry-wide definition of standards relating to manufacturers products. “NBS, BSI, BRE, CIBSE and the Construction Products Association have all expressed interests and done some work in this area,” he says. “As I understand it, efforts are now being made to come to a consensus.” This is something that may help address the concern among 70% of survey respondents that BIM was not yet sufficiently standardised. 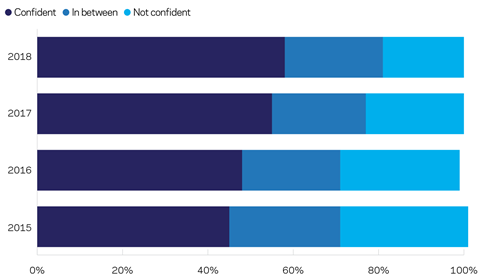 How confident are you in your knowledge and skills in BIM?

Of course there is still room for improvement and progress could be accelerated. Although most of sector is moving forward apace, the NBS report reveals that smaller practices (66% uptake) and those undertaking small, one-off projects (67% uptake) seem to be lagging behind medium (80%) and large firms (78%) and those engaged in more complex work (80% in the health and education sector and 83% in “mixed use”).

To some extent this is inevitable – the investment involved in making the switch to BIM can be onerous for small firms, and 50% of survey respondents said cost was one of the main factors standing in their way. But what the studies also show is that, once firms adopt BIM, it’s likely to be used for most projects. “It’s about reaching out to some of the smaller operators and showing them the benefits and how BIM can be adopted,” says Dan Hoogeveen, digital design manager at architecture practice Purcell. “For some of them, things are very tight in terms of fees and there’s a fear of taking the risk and making the jump to a more expensive system. Software vendors need to be looking at how they can appeal to some of these smaller enterprises, working with hardware companies to offer packages to entice them to upgrade.”

Hoogeveen works a lot in the heritage sector and sees this as another area to focus on – albeit a challenging one. “Some people have great historical expertise but not enough experience or investment in BIM. Clients may not want to exclude them because they are primarily interested in their track record, but that can hamstring the entire project team wishing to adopt BIM.”

He also argues that it’s vital for BIM to be considered at the start of a process, rather than further down the line. “You have to make these decisions at the very front end and it can’t be just one player driving this because BIM involves a collaboration between all the members of a design team – it’s not just a software.”

Edónis Jesus, BIM leader at Lendlease, believes progress is being made across the board, but emphasises that BIM is only likely to become the norm when everyone has greater knowledge of the system. This is borne out in the NBS survey, in which only 58% of respondents said they were confident using BIM and, when asked about the main barriers to adoption, 71% pointed to a lack of in-house expertise and 61% to a lack of training.

Lendlease runs training sessions for clients, and Jesus says awareness among them is increasing. “Clients who didn’t fully understand the benefits of BIM five years ago are now saying it’s definitely the way to go [but] there is need for industry to do more in terms of educating others about the benefits and sharing experiences and lessons learned. Looking towards BIM Level 3, the only way for us all to move forward is to get BIM Level 2 right.” 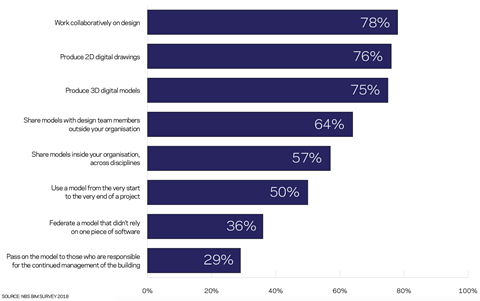 BIM usage and awareness: over the last 12 months did you ever…?

Retha Swanepoel, resident BIM expert at US-owned architecture firm Gensler, agrees on the need for companies to educate clients, but continues to believe that a lot of leadership needs to come from the public sector. “The government needs to provide more funding for research projects to provide actual metrics on defined processes. At the moment there are not enough solid metrics for us to convince our clients.”

There are signs that the government is taking up the gauntlet. The Centre for Digital Built Britain, for example, was set up this year with the aim of facilitating a digital revolution in the built environment, through research and by providing resources for the industry. “The UK can be proud of its BIM progress to date,” it said in a statement. “At the same time, we recognise that there is still considerable effort needed in making BIM, to a Level 2 maturity, business as usual – and growing its footprint across the built environment.”

The centre is already looking beyond the here and now, seeking to define and make progress on BIM Level 3, which could pave the way for the digitisation of the entire life cycle of the UK’s built assets. Lendlease’s Jesus says there are signs that building owners are realising the benefits of BIM in the longer term, from the angle of lowering operational expenditure. It’s something Viewpoint’s Wallbank echoes. “I’m seeing a start in the realisation from private sector clients that whole-life asset data is achievable and facilities management tools can take data from the design and construction process.”

More broadly, as rapidly developing technologies such as artificial intelligence, the internet of things and cloud storage continue to improve, they are likely to accelerate the adoption of BIM by creating a more advanced and efficient technological landscape. In preparation for that, NBS’ Hamil says, it’s crucial to get the basics right. “If you get the process and standards correct, the emerging technology will come and really make it fly.”