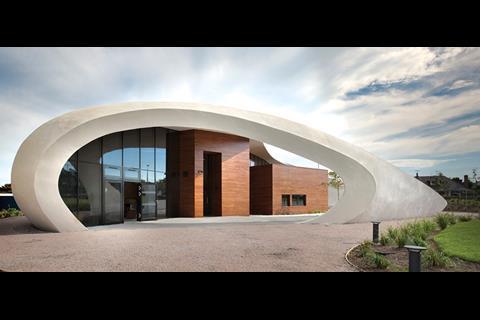 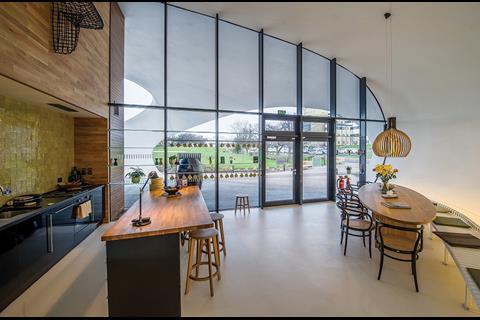 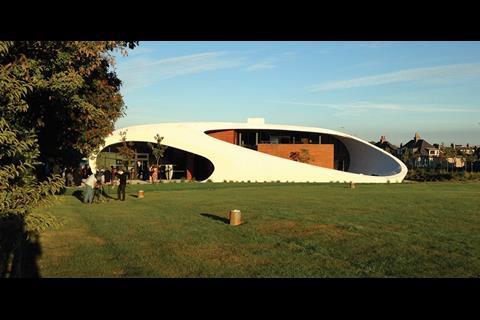 The curvaceous building form is inspired by a pebble

With its streamlined, organic form enhancing its welcoming ethos, the latest Maggie’s Cancer Caring Centre in Aberdeen, designed by Snøhetta, is a worthy winner of this year’s Small Project of the Year Building Award

Ever since Frank Gehry designed the first new-build Maggie’s Centre in Dundee in 2003, the centres have become as strongly associated with striking, contemporary architectural forms as they have with their social and emotionally centred brand of healthcare. Maggie’s care philosophy is based on providing safe, intimate, domesticated spaces for the comfort and support of cancer patients and their families, and this brief has been imaginatively reinterpreted by each architect who has completed a Maggie’s commission.

The winner of this year’s Small Project of the Year Building Award is the latest centre in the Maggie’s staple. Aberdeen is the last major Scottish city to receive a Maggie’s centre and the new £3m building is the first UK project of celebrated Norwegian practice Snøhetta, designers of New York’s September 11 Memorial Pavilion. They too have provided their own unique architectural take on Maggie’s care philosophy.

The building’s form resembles a pebble with a curved, outer concrete shell conceived to evoke feelings of protection, warmth and enclosure. The white outer envelope has large openings carved into its surface. Built within the outer envelope and visible through the openings is an internal timber structure appended by large sheets of curtain wall glazing.

It was the free flowing concrete form, so reminiscent of the work of brazilian architect Oscar Niemeyer, that presented some of the most onerous challenges

However, achieving this streamlined, organic look required a great deal of technical ingenuity, much of which was brought to bear by main contractor Robertson. Robertson had previously completed several projects for NHS sites across Aberdeen but the less conventional architectural ambitions of the Maggie’s project presented more complex challenges.

One of the earliest of these was the facade cladding solution. The timber initially specified was tongue-and-groove American white oak panelling that was to be applied to the entire solid, non-concrete facade, both inside and out. Internally, the timber panelling was to also incorporate seating, cupboards, flush-inset shelving and recesses of various sizes.

However, early quotes for this particular package were coming in at almost three times the budgeted allowance, an impossible extravagance on a private healthcare budget and an inconceivable expense on a public sector NHS project.

Robertson solved the problem by what they describe as a creative approach to supply chain collaboration and “intensive negotiation” during the mid-tender interview stage. They eventually developed a solution that used laminated American white oak timber panelling as an alternative. As well as shaving almost £200,000 off the initial quote and largely keeping to the original budget, this solution proved to be more robust than the initial specification and was quicker to install while still meeting the high-quality aesthetic criteria demanded by the architect and client.

The glazing also presented another similar challenge. The initial proposal specified planar glazing to be used within the timber frame. But this too came in significantly over budget, almost twice the specified sum. By adopting a proprietary curtain walling system instead, costs were again slashed and the design aesthetic maintained. 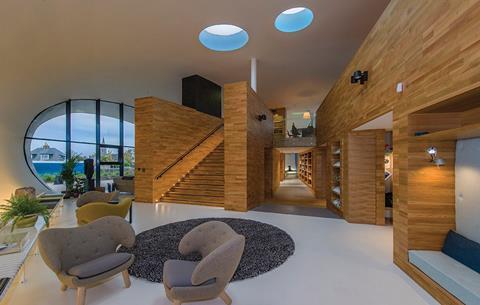 But perhaps unsurprisingly it was the building’s pristine white, free flowing concrete form, so reminiscent of the work of legendary Brazilian architect Oscar Niemeyer, that presented some of the most onerous challenges. For visual reasons it was essential that the external concrete shell appeared completely free of joints. In any case, as the shell curved in all directions, a sectional panel or cladding system would not have been an option.

Instead, the design team, in conjunction with reinforced concrete specialist Shotcrete Ltd., developed an innovative alternative solution. Shotcrete specialise in spraying concrete in-situ without the use of extensive moulds and this was essentially the construction strategy adopted.

Constructing the building’s structural frame was initiated by the development a 3D model. Once the foundations were in place, internal and external scaffolding was erected around it, interlinked by scaffold ties at approximately 2m centres. The positions of the ties were laser surveyed with the data then transferred onto the 3D model. This enabled the exact locations of the intersection between the ties and what was to be the inner frame to be extrapolated and relayed back to site.

The structural frame of the building was then formed by 16mm rebar spanning between the extrapolated setting-out points. The concrete frame was then sprayed with concrete while the scaffold ties remained in place. Once the ties were removed the holes were in-filled and the entire frame finally poured. It was only after this point that the large openings in the final envelope were cut out, shuttered and sprayed with concrete to complete the overall shell.

Finishing the interior soffit of the concrete envelope also presented its challenges. Approximately 250mm of insulation was required to ensure that the building achieved required U-values. However, as the design requirements specified that the continuous concrete aesthetic be preserved internally as well as externally, the challenge was how to uniformly apply the insulation to the interior shell with no panelling system to hold it in place. Moreover, as plywood or plasterboard would obviously not bend three-dimensionally, the insulation system had to work with the internal plaster finish.

Once again a sprayed solution was selected. Pre-fabricated timber pegs had been shot-fired into the internal face of the concrete. Icynene, a form of sprayed insulation, was then applied between the pegs before a heavy duty lathe pinned to 6mm fibreboard was fixed to the pegs and spanned across the internal surface.

This process presented the final challenge. As with the exterior, the aesthetic ambition for the interior was to create a seamless, joint-free, radial curve for the internal envelope. However, hand -applied plaster finish might have revealed unsightly grooves or “flat-points” once exposed to daylight.

The solution was to strap flexible timber runners across the ends of the timber pegs. This created an internal 3D grid within the envelope. By incrementally adjusting these pegs millimetres at a time, the desired exact curve profile for the soffit was achieved before the finishing plaster lath or render was applied.