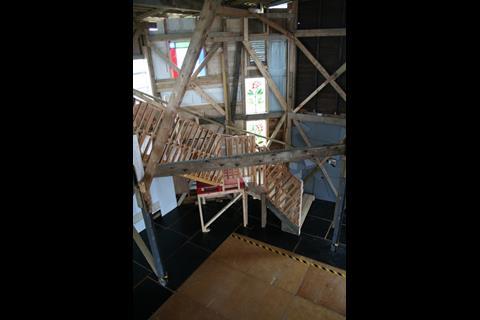 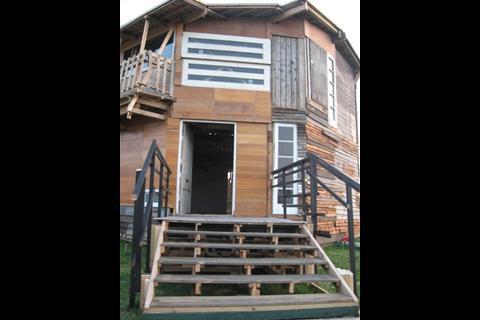 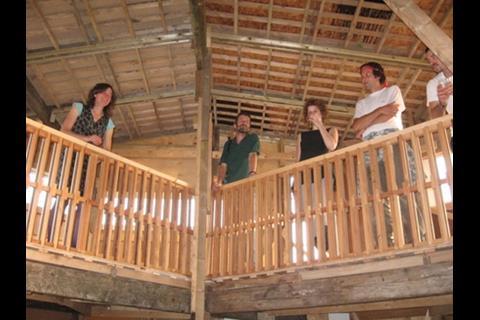 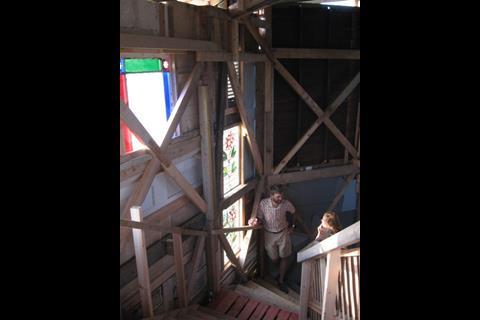 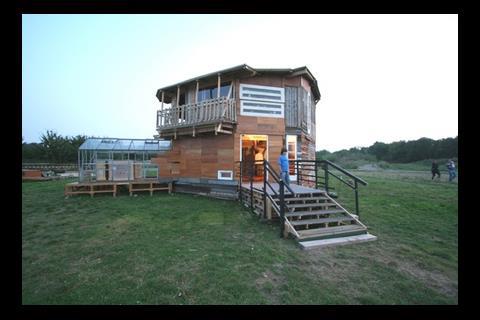 The Fenland pavilion made out of unwanted doors, windows, gates ... and stained glass windows

Wysing Arts Centre development manager Annie Bacon is terribly upset about the headline in Metro referring to her new venue, Amphis. The free sheet ran with: ‘This gallery is a load of rubbish’.

“The items were donated by the local community!” says Bacon, with some indignation. Perhaps the beauty of the completed structure, deep in the Cambridgeshire countryside, has made her forget that the amphitheatre-cum-cinema-cum-living room was, indeed, put together from discarded items. A huge amount of local media interest ensured that there were sufficient items to make the building.

As designing artist, Folke Koebberling himself says: “We’re very proud. It’s the first building made totally out of garbage and cost next to nothing.” He created it with fellow German artist Martin Kaltwasser.

But perhaps Bacon is referring to the fact that various very high quality items were bequeathed to the project by some ancient institutions in nearby Cambridge to build from.

The world famous Fitzwilliam Museum donated wooden racks which came in handy for the staircase. A Cambridge college gave lots of tables that had been used by students through the years. Their shiny black surface gives the floor a tremendous consistency, says Bacon. A local school even donated an unwanted stage.

Amphis and its 24 long-term volunteers – plus 30-odd people who worked for a day or so - were also proactive in donating items for the project. They went around local building sites to look for no-longer-needed materials. House builder Redrow and local firms Hills Partnerships and SCD builders were among the donors.

“No one turned us down,” said Newcastle-based artist and volunteer, Claire Ward, who lived on site for the duration.

But perhaps the most striking and decorative element is a stained glass window, which gives the structure much-needed colour.

Inevitably, however, much of Amphis was made from the ordinary doors and windows and other scrap wood donated by the wider public.

“There was wood, windows and doors –lots of doors”, Bacons says. “There were even some gates. It’s all wood of some description, wood of all shapes and sizes”.

The structure was mainly screwed together. Amphis was built without a plan on an ad hoc basis, says Ward.

“It was a very organic process. There were a lot of discussions on site.”

That’s just as well because the organising artists’ main aim was to create something collaboratively – a community space built by the community.

“With their approach that same ‘waste’ often going to costly land fill can be rebuilt - recycled, reused and recreated to make something not only beautiful but functional,” said Wysing director, Donna Lynas.

The artists were specially chosen to fit into the arts organisation’s 2008 programme, ‘Communities under Construction’, which aimed to provide a commentary on the large house building programme in the area.

“At a time of huge housing growth in the region, Wysing wanted to ask what made a community”, Lynas continued. She said the collaboration aimed to raise levels of ‘social capital’ – social ties among communities – in the area.”

The completed Amphis – now an adjunct to the arts centre that spawned it – will stay standing for another couple of months, showcasing films and performances.

But there were some things that were so rubbishy that they couldn’t be made use of, Bacon confirms.

“Palettes,” Bacon says. Even she would admit that they are really rubbish.

Well, says Koebberling: "One person's trash is another person's treasure."