Can timber frame sites ever be safe? 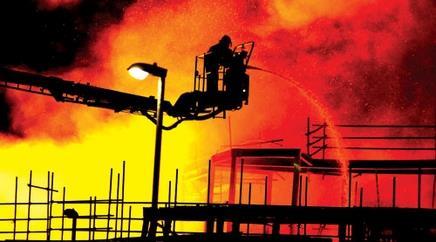 A fire that ravaged a timber-frame building in Edinburgh last month was the latest in a series of similar incidents that have blighted the industry over the past few years. Thomas Lane examines what is causing this worrying trend and what is being done to curb it

On 17 May a six-storey building in Edinburgh became the seventh large multistorey timber-frame structure in two years to be destroyed by fire.

By now these incidents have a familiar format: a fire breaks out on a half-built structure, often in a built-up area. By the time the fire fighters arrive there is little they can do to put it out. The ferocity of the blaze means they have to concentrate on evacuating people from surrounding homes and preventing it from spreading any further. Eventually the fire burns out, leaving little more than a pile of ash and some twisted scaffolding.

Meanwhile, dramatic images of the fire appear in the media, which does not do much for the image of the construction industry – timber frame, in particular. This is followed by stories of inconvenienced local residents who often cannot return to their homes for days.

Stories like these are becoming a depressingly regular news item. The trend started in 2006 with a major fire in a six-storey development by St George in Colindale, north London. Two blocks were completely destroyed, and Building discovered that the first of these blocks, which consisted of a bare timber frame, burned to the ground in just nine minutes.

Horrified by this negative publicity, the timber-frame industry was galvanized into action and came up with various ideas to prevent a repeat incident.

However, this was to no avail. Since then there have been six similar fires – three in the past three months. The most recent was a block of flats in Edinburgh, last month.

So why is this still happening? And is anything being done to tackle the problem? The answer to the first question is that the fires keep happening because people don’t think it will happen to them. Peter Jackman, the technical director of fire consultant IFC says people do not see fire as a real risk. “It’s a ‘it won’t happen to me’ syndrome,” he says. “How many people at home bother to change the batteries in their smoke alarms? Fire is quite rare.”

People do not see fire as a real risk. How many people at home bother to change the batteries in their smoke alarms?

Jackson should know. Last year IFC produced guidance on reducing the risk of fire, including measures such as improved security to cut the risk of arson, fire protection being fitted early and materials being stored safely, yet there have been four major fires on timber-frame sites since. His firm also teamed up with the UK Timber Frame Association (UKTFA) to offer a fire safety inspection service, but he says this has only been used on a handful of sites.

The Fire Protection Association (FPA) does not think there has been much pressure on the industry to reduce fire risk. James Glockling, its technical director, says the people do not appreciate the special risks posed by timber frame. “It’s a by-product of changing construction techniques. It is taking time for people to catch up,” he says.

Glockling also says the insurance industry is unlikely to increase premiums as a result of these regular fires. “Timber frame is cheap to put up, so if there is a loss it doesn’t cost insurers much,” he says. “The site can be quickly cleared and another frame put up.” He adds that the insurance market is very competitive at the moment so insurers are more tolerant about these types of claim.

There may, however, be some cause for optimism. The UKTFA, the Health and Safety Executive (HSE) and fire service have been researching the problem and are about to unveil a raft of hard-hitting measures to turn the tide.

The week after the FPA released its report on the Colindale fire last April, the UKTFA announced a number of initiatives to tackle the problem. This included installing fire-stopping measures earlier, research into fire retardants and providing an independent inspection regime to ensure contractors were making their sites safer.

At the end of June it will publish guidance based on the FPA’s existing code on fire prevention in construction, with an added risk assessment tool and instruction to install vertical fire stops early.

The UKTFA is making it a condition of membership that timber-frame firms follow this guidance. “We see this as a major initiative,” says Stewart Dalgarno, its chair. “We’re raising the game and will enforce the recommendations through the HSE.”

Barratt says it is redesigning some timber-frame schemes.
In the past two years, timber prices have leaped 30%.

That enforcement will come in the shape of a new crackdown on fire safety on site by the HSE. “We’re going to try to lift the profile of fire safety in construction,” says Phil Burgess, the inspector in charge of fire and refurbishment in the HSE’s construction division. “We’ll look at fire in general, and particularly in high-risk buildings such as timber frame, refurbishment and tall buildings.” Burgess says the HSE’s guidance – HSE 168 Fire in Construction – is under revision, but he won’t say whether the new version will contain measures specific to timber frame.

As these initiatives have only just been announced it is too early to say whether they will have any effect. The HSE is short on manpower and although some 90% of the timber-frame industry are members of the UKTFA it is hard to say how powerful the threat of expulsion is. In any case, responsibility for fire safety on site is largely down to the main contractor.

Meanwhile, there is a bigger threat to timber frame. In today’s tight market, housebuilders are looking for ways to save pennies. For instance, Barratt says it is redesigning some timber-frame schemes in masonry because it is 15% cheaper. In the past two years, timber prices have leaped 30%, but masonry has barely moved. In a booming market the speed of construction with timber frame was worth paying for, but it is far less compelling in a flat housing market.

Another reason is quality. Architect PRP says several of its clients are moving away from timber frame because in some cases it shrinks more than allowed for, causing problems such as window sills tilting. “Clients are finding the benefits of timber frame aren’t as good as has been claimed,” says Rick Burgess, PRP’s technical director. “They are still using it for developments of up to three-storeys high, but are switching to light steel for taller buildings so they don’t have movement and fire issues.” In response, the UKTFA has just announced new technical guidance in a bid to tackle the shrinkage problem.

So it seems timber frame is facing a combination of threats. The UKTFA’s latest efforts may be promising, but competition from other materials, technical difficulties, the housing downturn, as well as the threat of fire, may mean its effort are in vain.

Either way, we will probably see less dramatic images of burning timber-frame developments on the news from now on.

Why is fire such a risk in timber frame?

Timber frame has become popular because it offers speedy construction and ticks the boxes for social housing providers who have to embrace modern methods of construction.

The problem is that timber-framed buildings are not resistant to fire until complete. The risky period is during the construction phase, because the timber frame goes up first and the fire-protective cladding, plasterboard and fire stops are added later.

The problem is largely confined to open-panel timber frames, which are made up of lots of small-section timber studs placed close together. This happens to be the ideal arrangement for a roaring bonfire.

Fires are started accidentally (from hot works or smoking) or deliberately (many fires start at weekends or at night).

A litany of disaster

17 May 2008
Developer Hart Building’s six-storey timber-frame block of flats at Waterfront Gait, Edinburgh, was totally destroyed by a fire. About 150 local residents were evacuated. Arson is suspected.

5 April 2008
A fire at five-storey Bellway development at Hawkhill Close in Edinburgh destroyed 82 flats. About 50 residents were evacuated, some for several days while the structure was made safe. It was blamed on arson.

23 March 2008
Five-storey block of flats being developed by Bennett Property in Burnage Lane, Manchester is destroyed. It consisted of 40 luxury flats with retail at ground-floor level. The cause of the fire unknown; arson is a possibility.

11 August 2007
In a five-storey development at Lemsford Road, Hatfield, 84 flats were destroyed. The scheme was being built by Mansell for Metropolitan Housing Partnership and St Modwen Properties. Opposite, 14 houses were badly damaged. The cause of the fire was never established.

9 April 2007
Four-storey 58-room block of student flats, being developed by RM Accommodation in Falconar Street, Newcastle upon Tyne, was destroyed by fire. A nearby Northumbria university building was also damaged. It was blamed on arson.

27 March 2007
Three-storey 11 apartment block by Persimmon at Deans Park, Willenhall, west Midlands was destroyed. It was believed to be arson.

12 July 2006
St George’s two six-storey apartment blocks at Beaufort Court, Colindale, north London were destroyed and the halls of residence opposite, a police college and parked cars were badly damaged. The fire was believed to have started accidentally.