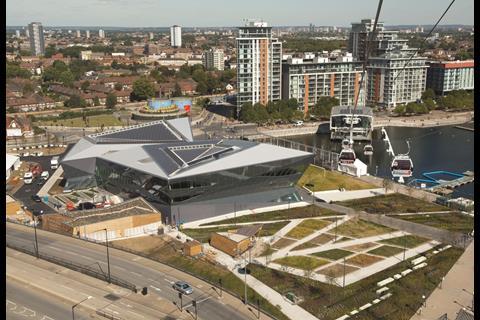 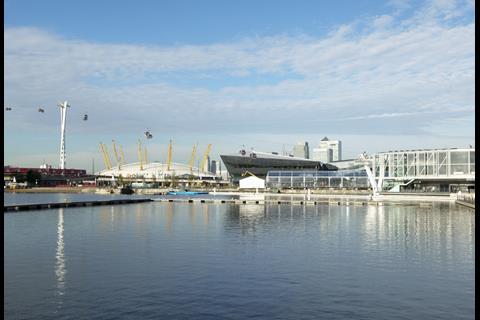 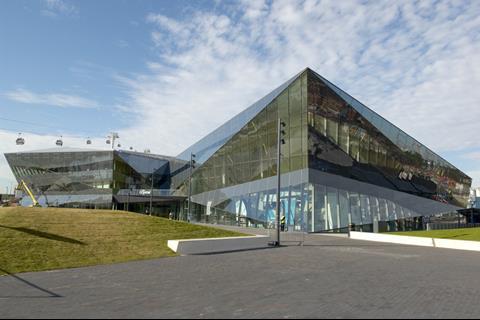 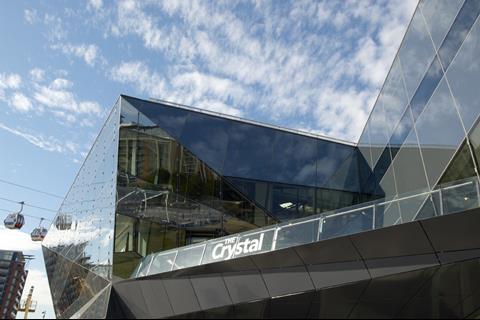 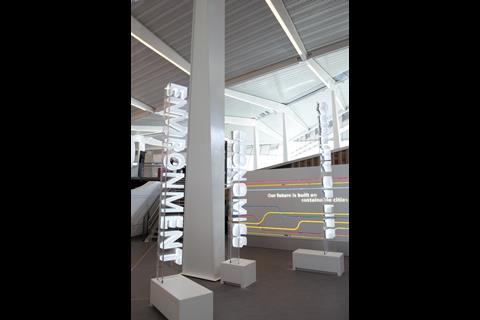 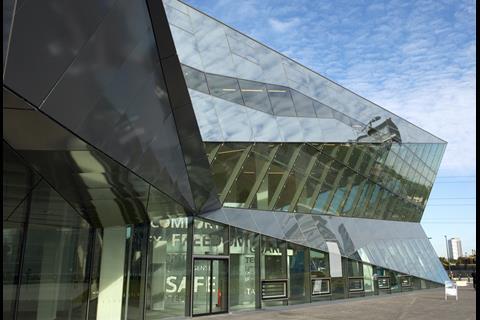 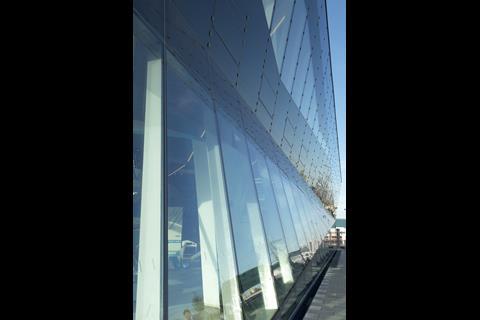 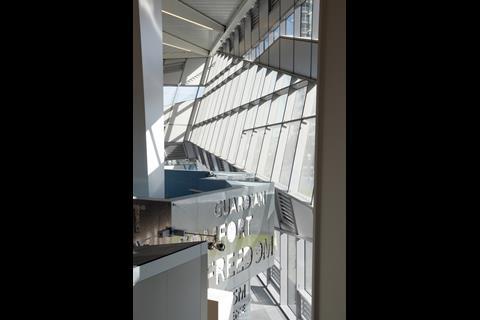 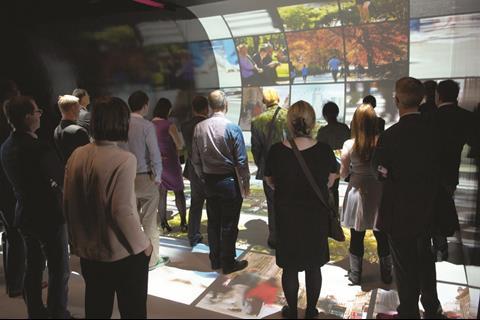 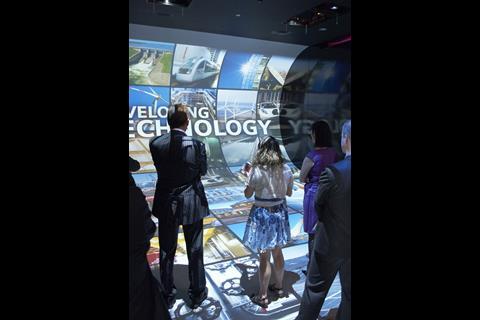 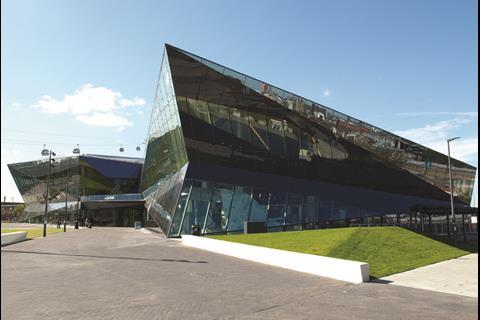 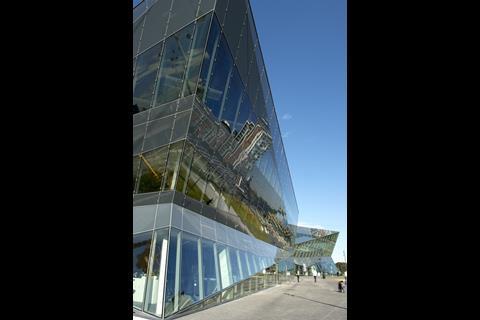 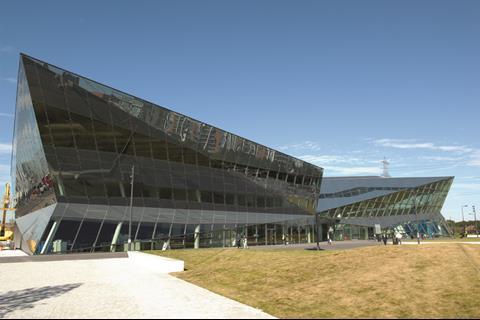 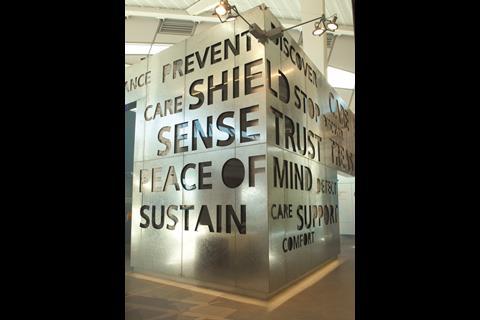 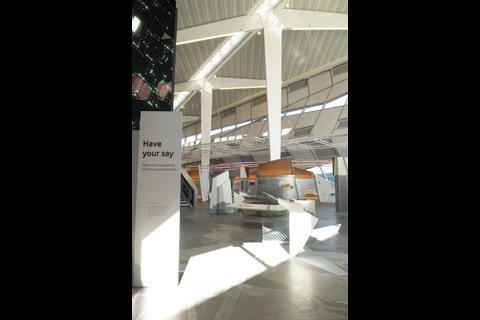 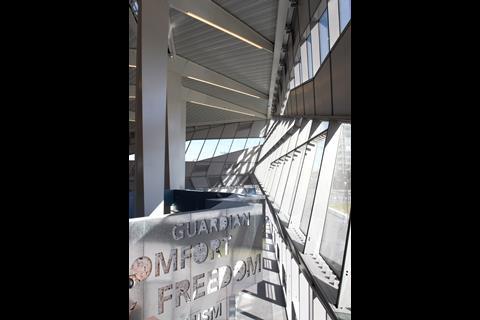 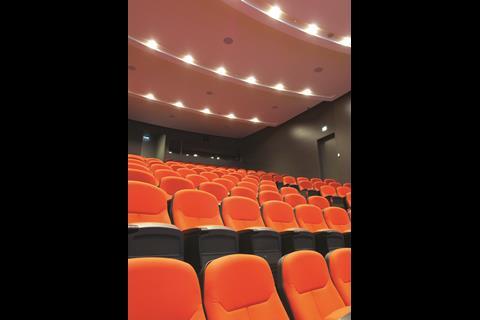 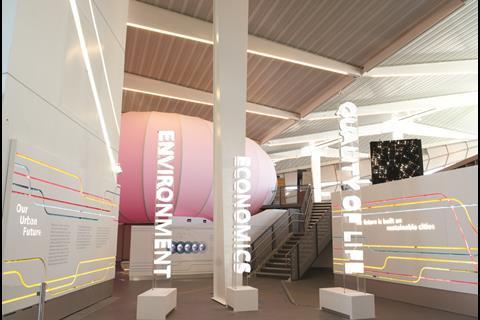 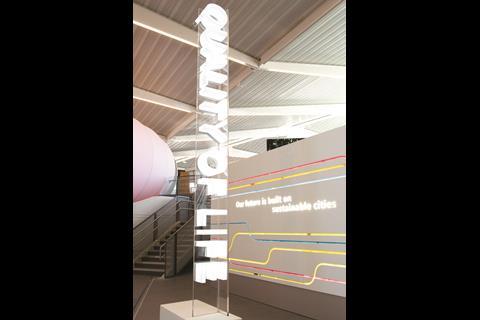 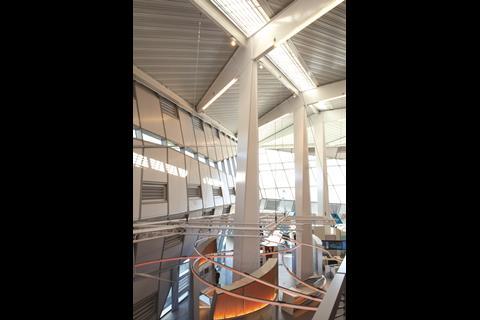 he interior spaces are defined by exposed steelwork and generous daylighting 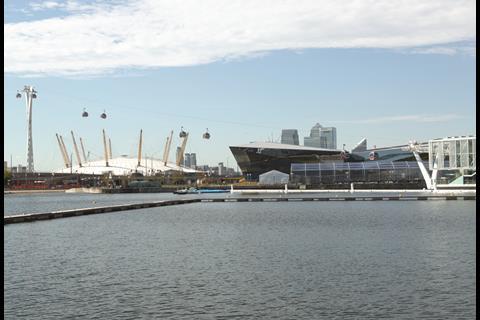 Royal Victoria Dock plays home to a new exhibition venue with sustainability at its heart, the Siemens Crystal

One hundred and sixty years ago the world’s largest exhibition to date was held inside London’s Crystal Palace. Sumptuous as its exhibits were, it was the building itself, with its awe-inspiring combination of technological prowess and aesthetic drama, that symbolised the spirit of innovation, education and spectacle at the heart of the Great Exhibition’s pioneering ideals. A century and half later a new albeit much smaller exhibition building on the other side of London has also deployed architecture as the ultimate expressive tool with which to practice what you preach.

Like its Victorian predecessor, the £30m Siemens Crystal on the edge of east London’s Royal Victoria Dock is an exhibition venue and visitor attraction. When it opens next week, it will host the world’s largest permanent exhibition centre dedicated to urban sustainability. The issues dealt with within the exhibition are familiar staples in the sustainability spectrum: renewable energy, smart buildings, efficient consumption, behavioural monitoring. But at the Crystal, these principles are so deeply embedded into the design of the building itself that it becomes the chief exhibit. 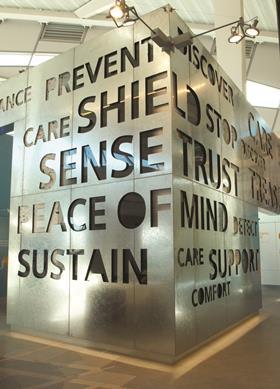 According to global technology and engineering Siemens, the Crystal is the first building in the world to boast both BREEAM outstanding and LEED platinum certifications. Accordingly its roll call of sustainability features is undeniably impressive. Rainwater harvesting, black-water treatment, solar water heating and an intelligent building management system are just some of the advanced sustainability elements that have been incorporated into the design.

But in an age of environmental awareness, the inclusion of these elements alone is not in itself remarkable. What is special is the manner in which they have been comprehensively embedded into the spirit and execution of the design to the extent that they have informed everything from the shape of the building to engineering methodology of its structural frame.

That this level of environmental sophistication has also been achieved behind an envelope of glass, when glass is perennially misunderstood as a building material incompatible with energy efficiency, is all the more symptomatic of the evangelical rigour with which the design of Siemens Crystal reflects and responds to the ethos of its content.

The building occupies an enviable waterside location right beside the Royal Victoria Dock. Its prism-like form is comprised of splaying angles and folded planes, all of which are encased behind glass facades. While these pronounced geometric contortions rather wearily recall the deconstructionist exploits of architectural theorists like Daniel Libeskind and Peter Eisenman as far back as the eighties, Sebastian Ricard, director at shell and core architects Wilkinson Eyre, insists they are grounded in concept.

“We wanted a landmark building that celebrated the ongoing regeneration of the local area and we based this on the “pavilion in the park concept” he explains. “The Crystal is surrounded by the iconic profiles of buildings like Canary Wharf and the Millennium Dome. We wanted a transparent surface that would reflect its surroundings but also be different from them and say something new. The crystal is an analogy for how this is a reflective and responsive building. We also wanted to challenge the traditional idea of a front, back, sides and roof. This is a building where all these elements essentially merge into one continuous plane.”

Of course the other key driver behind the building’s concept is high sustainability, which Ricard maintains “was integrated into the building fabric right from the start.” As one would expect in a glass building the interior is exceptionally well-lit by natural daylight and it also employs passive design to achieve full natural ventilation. Solar thermal panels provide hot water and 10% of its energy is generated from photovoltaic cells on the roof. A ground source heat pump provides 100% heating and 80% cooling. The building is also entirely powered by electricity and even provides several electric car-charging points. It also has the future capability to import and export electricity to and from the national grid. 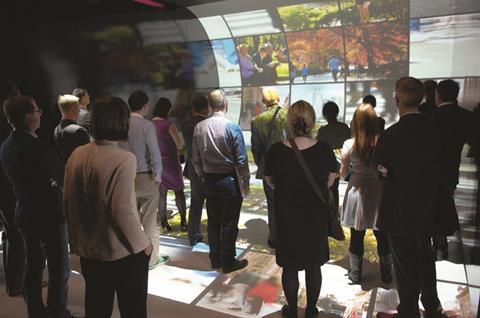 But the architecture too responds to this sustainability agenda. Like the exterior, the interior spaces are framed by a series of inclined walls and swooping planes, but here too they are joined by slender steel columns supporting the inclined, chamfered roof. While much of the superstructure in the Pringle Brandon designed interior is exposed and painted white, the exhibition installations themselves add colour and contrast, with curved, brightly coloured pod-like forms helping create a series of dynamic spaces that remain streamlined and efficient.

The prodigious quantity of natural daylight reveals a key method by which the architecture itself responds to the building brief - glazing. Six different kinds of glass have been used on the facade each one varying in opacity and transparency at various locations.

As Ricard explains, “many people think glass is non-sustainable due to high solar gain and poor insulation. But it’s actually a tremendously flexible material and by varying opacity and orientation to determine how and where light enters the building and by ensuring that potential weak points like joints do not compromise U-values and thermal performance you can actually maximise daylight where you need it, limit reliance on artificial lighting and achieve good thermal efficiency.” 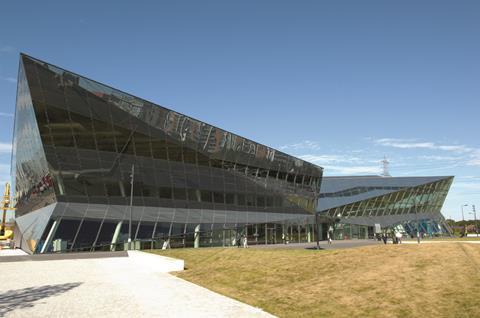 An example of the means by which this principle is realised at the Crystal can be found on the walls to administrative office areas. Many of these are inclined downwards to prevent direct solar glare and minimise overheating in habitable areas. Not only does this clearly impact on the exterior form of the building therefore, but it is an intuitive expression of how the Crystal’s architecture responds to its environmental aspirations. 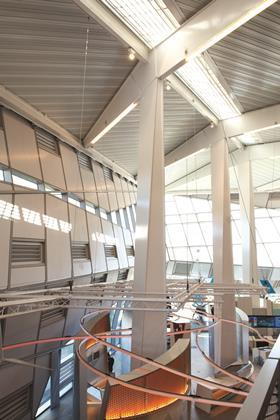 he interior spaces are defined by exposed steelwork and generous daylighting

This principle is also evident within the structural frame. The complex geometry of the building negated the use of a standard conventional steel frame. So a bespoke design was selected whereby the weight of the steel could be perfectly matched to the exact structural requirements of the specific location in which it was being used. This was achieved by using a CNC-cut minimum weight pre-fabricated steel frame. Although this was a more expensive solution than a standard frame, it maximised the efficiency of the steel and thereby ensured that once again the sustainable approach had a direct impact on the building fabric.

The Crystal’s sophisticated building monitoring system is also incorporated into one of the exhibits where a digital display reveals live information such as energy consumption and water usage. Another interactive installation demonstrates the rainwater harvesting system. But despite the comprehensive and enticing range of exhibits on show, only these select few actually demonstrate the building’s environmental performance to a wider audience.

This is an inevitable consequence of pursuing a sustainability approach that is integrated into the building fabric rather than being a bolted-on extra, capable of being advertised in isolation. Many of the Crystal’s green credentials, such as the ground-water heat pump and the solar panels, remain underground or hidden from public view. If a means could be found to integrate more of these elements into the exhibition to fully convey the essence and application of the building’s sustainable agenda to the public, then it would enrich the Crystal’s pioneering message all the more. 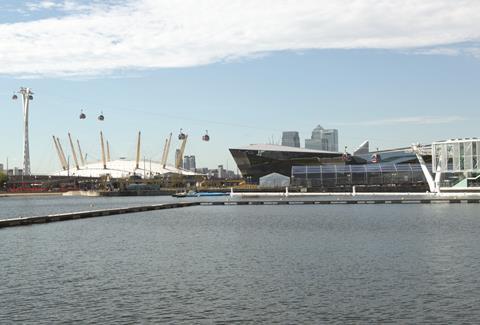 The Siemens Crystal plays a key role in the ongoing urban regeneration of east London. A century ago London’s Royal Docks, the largest enclosed docks in the world, were the nucleus of the biggest shipping port in the world. After decades of brutal decline and deprivation in the middle of the 20th century, the docks are now being transformed from an industrial engine-room to a technological hub. Their 122ha of prime waterside land was designated a Special Green Enterprise District in 2011 and aims to become a base for high-tech manufacturing, research and green enterprise of which the Siemens Crystal is a key component. The Crystal has also been built in the midst of other iconic symbols of east London’s ongoing urban and economic regeneration. These include the Millennium Dome, Canary Wharf and the Thames cable car, also designed by Wilkinson Eyre.