Architect Make decided a new university biosciences building deserved the UK’s first straw curtain walling system. So how did they do it?

Straw bale construction has been used as a structural walling solution for several years but never for curtain walling on a commercial building.

Curtain walls tend to be multi-storey, visually delicate affairs with large areas of glazing. Curtain walls also need to go up super fast to keep demanding commercial build programmes on track. Neither of these are attributes associated with the large, crude rectangular objects found in corn fields after the harvest.

But architect Make has turned this thinking on its head with a new building for the University of Nottingham, which will be on its Sutton Bonington campus. This will be a new school for biosciences and veterinary medicine and it features the UK’s first straw bale curtain walling system, which was developed by the architect.

Why go to all this trouble when there are plenty of perfectly decent cladding systems available off the shelf? “The university has a farm and produces straw as a waste product so it seemed a shame not to use it as part of the building fabric,” explains Bob Leung, partner in Make. “It was free, with excellent insulating properties and, as it is a plant sciences building, it seemed fitting considering what they do.”

Leung adds that the decision to use straw had to be made well in advance as the straw is harvested once a year and, once gone, isn’t available for another 12 months. 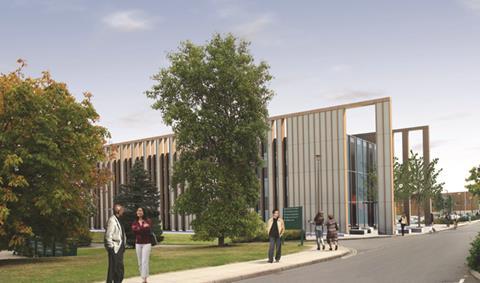 But first Make had to turn a crude agricultural product into a curtain walling system that looked good and was fast to build. The only precedents were traditional straw bale construction where the bales are piled up and rendered on both sides, and the Modcell system, a prefabricated solution where bales are fitted into wooden frames and lime rendered in the factory. But Modcell panels represent a walling system designed to fit between floor slabs rather than in front of the slabs, onto the face of a commercial building.

Make’s solution is to package the bales into wooden boxes rather like the Modcell panels. The difference is that the bales are stacked end-on, vertically, which creates a long, slender box that is fitted to the face of the building vertically.

These boxes can be placed next to each other to create a solid facade or, with a gap left between two modules, can be infilled with glazing. Make has capitalised on this by putting more solid areas on the south facade to limit solar gain.

Another advantage of the system is that the modules are one bale deep. By putting the glass at the back of the modules, the depth shades the windows when the sun is at an angle to the building.

Within the entrance atrium we asked the contractor to take off the backing boards to expose the straw, which will show what this building is all about

The distances involved were relatively small as the modules were made in the barn where the straw - which had been harvested nine months earlier - was stored. Contractor Eurban made and installed the modules. Basic wooden frames were delivered to the barn. Workers fixed a back to the frame and put wooden dividers inside the box for each bale. Each box holds between eight and nine bales, which were simply stuffed into each compartment.

Cross-laminated timber was applied to the back of the box, which will help brace the cladding modules. For the front of the box a board was fixed over the straw and a Sto render applied on top, which was lighter than the traditional lime render. Both the board and render are breathable, allowing moisture to pass through, stopping the straw rotting. This render is set back from the front of the box and provides an aesthetically pleasing shadow line at the edges of each module.

Installation was straightforward, with each module taken to site then simply craned into position and fixed to the fronts of the slabs. The windows (an off-the-shelf system sourced from local company, SAS) were fixed between the modules. According to Leung, the facade was straightforward to construct, a process that took two months.

But do the students know the building has a straw facade? “It would be a shame if they don’t know it’s a straw bale building,” says Leung. “Within the entrance atrium we asked the contractor to take off the backing boards to expose the straw, which will show what this building is all about.”

What about fire, rats and rot?

Straw is very green but its fantastic insulating properties make it attractive to vermin and, as it is a natural material, it rots if it gets wet. It also burns very readily. This can be dealt with by: