Conversation with a heretic 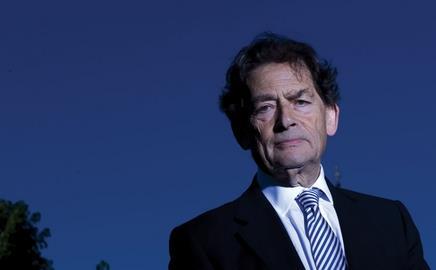 Nigel Lawson thinks Britain’s attempts to stop the world getting warmer are bound to fail and will wreck our economy in the process. It would be much better to spend the money and effort adapting to the inevitable.

How could anyone dispute the reality of climate change? With daffodils blooming in January and April temperatures higher than Beirut and Mexico, surely the evidence of global warming in our part of the world is all around us? And surely the need to do something about it is the largest single problem we face?

Lord Lawson – formerly just Nigel – is best remembered as Margaret Thatcher’s boom-and-bust chancellor, and for losing a lot of weight after leaving office. He re-emerged from the shadows in November when he delivered a stinging speech on climate change to the Centre for Policy Studies (CPS), a

right-leaning think tank. In it he questioned the assumption that the rise in average global temperature in recent years was evidence of widespread climate change, and said basing policy on unquantifiable science was irresponsible.

Scientists and environmentalists lined up to label the 75-year-old peer an irrational sceptic unwilling to accept the reality of global warming. Tony Juniper, Friends of the Earth’s executive director, said: “Like the last of a dying race of dinosaurs, Lawson’s ideas are on a one-way journey to extinction.”

Since his CPS speech, Lawson says he has been made a pariah – “a heretic”, he says – for speaking out on climate change. “It has turned into a religion,” says Lawson. “People like to believe in something and conventional religions don’t have the hold on people in this country as they once did. This is the new religion, but I don’t think that is a basis for sensible decisions.”

Lawson has questioned the authority of UN scientific body the Intergovernmental Panel for Climate Change (IPCC), although his chief concerns are not the scientific evidence but how the world is reacting to the threat of climate change. “The real question is what is, in practical and economic terms, the most cost-effective way to deal with what’s happening – is it to cope, or is it to try and stop the world getting warmer?” he asks.

Attempting to do the latter is extremely problematic, according to Lawson. To curb emissions would need worldwide agreement to cut the use of carbon-based fuels, which Lawson says developing countries such as China and Brazil will never agree to. Mere concessions to reduce emissions will not be enough. To achieve the aims outlined in Sir Nicholas Stern’s review on the economics of climate change, the UK must reduce the use of carbon-based energy by 60% before 2050. “There would have to be a complete transformation. It’s not just gestures like turning off the standby on your television. This is a massive change that can only be achieved by making carbon-based energy so expensive that low-carbon energy sources will become economical.”

The only way to do this, he argues, is by levying an extremely heavy carbon tax – a cost that no government would be foolish enough to impose on its electorate. “I don’t see that happening. What we have to do is use a bit of common sense and adapt to the changes that are happening.”

The idea is for us to lead the world in cutting carbon. I can assure you that if we do, nobody will follow, and it’ll just damage the people and industry in this country to no purpose

The idea of adaptability was another feature of Lawson’s speech to the CPS. Instead of spending billions trying to stop climate change, we should invest money in dealing with the global transformations that would ensue if the IPCC’s predictions came to pass. The “central guess” of the IPCC’s assessment, says Lawson, is that the world’s average temperature could rise by 2.5ºC over the next century. As an example of how humans adapt, he compares two cities: Helsinki, with an average temperature of 5ºC, and Singapore, with an average of 27ºC. If human beings can thrive in temperatures as varied as this, Lawson argues, there is no reason why a 2.5ºC rise over a century should be unmanageable. “In different parts of the world, in different climates and in different periods of time when the climate has been different, man has managed to adapt,” he says.

He adds that modern technology – for example, improved agricultural techniques – will come into play to combat the inevitable rise in temperature. Lawson says flood defences and water management are more than advanced enough to cope with Stern’s predicted quarter of an inch rise in sea levels: “It’s what the Dutch have been doing for hundreds of years,” he says.

Given that Lawson thinks human beings are capable of weathering the storms that climate change will bring, it’s no surprise to learn that he thinks the government’s decision to legislate on the matter is irresponsible. The draft Climate Change Bill, recently drawn up by the government, commits the country to the 60% emission reduction target recommended by the IPCC. “It’s crazy,” he says. “The idea is for us to lead on this issue. I can assure you that if we do lead, nobody else will follow and it’ll just damage the people and industry in this country to no purpose.”

Lawson warns that if the UK goes ahead with its planned carbon reduction commitments, energy will become much more expensive here than in the developing world. Industry will relocate to where energy prices are cheaper and the net carbon emissions will remain unchanged.

As well as being economically damaging, the government’s plans are also ethically unbalanced, he says: “The IPCC’s most conservative model suggests that in 100 years’ time, living standards and GDP per head for the world will be about seven times what they are today. So, to tell the people of this generation that they’ve got to make sacrifices to benefit people who are going to be substantially better off than they are, is, I think, a difficult proposition to sell.”

It isn’t only the Labour government that is trying to sell this particular proposition to the British people. The so-called “new Conservatives” are just as concerned about the environment. Indeed, they claim to have set the agenda. Lawson seems unconcerned about his party’s stance. “It’s the zeitgeist – it’s something that goes down well with the media and it’s the mood of the moment,” he says. “But when it comes to living up to their rhetoric with huge carbon taxes, I think they will find they’ve lost public support.”

Lawson recalls the Club of Rome, a group of environmentalists started in the seventies who warned that the earth’s resources were running low. “This kind of madness has happened from time to time in the past,” he says. “It was thought then that there would be severe shortages of all raw materials and unless something was done, there would be mass starvation, pestilence and wars.”

It didn’t happen, and although the Club of Rome still exists, nobody is making laws based on their predictions. In Lawson’s opinion, the green debate is a passing fad that will soon fade into the national memory. “People get carried away by these things, and eventually as time goes by, they realise how foolish they’ve been. People will come to their senses, but it will take a bit of time.”