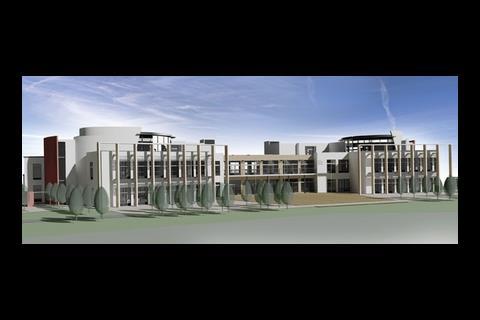 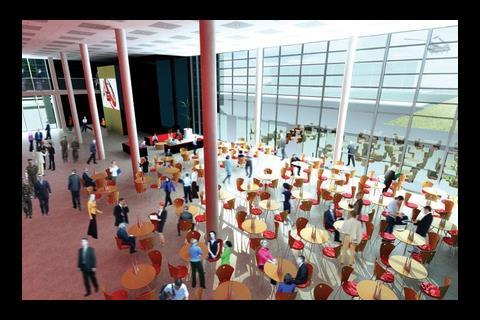 Leisure and recreation facilities are key to attracting and retaining personnel 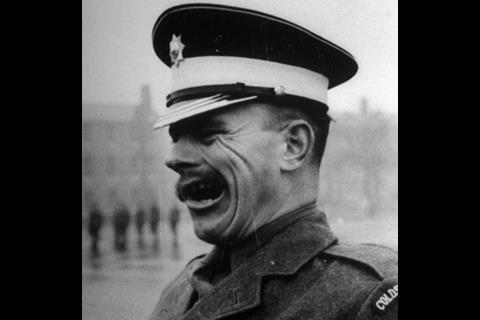 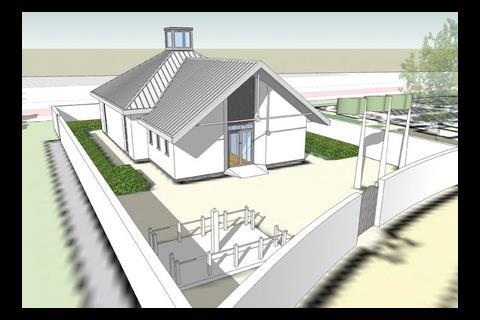 The scheme includes the construction of 90 buildings as well as the infrastructure and landscaping, the complex even includes a Hindu temple for use of Ghurkas (pictured)

A £700m military college the size of a small town, to be built in the next four years. Not so clever now, are we? Capita, you take the training facilities, Brownrigg the living quarters. HLM, you’re with me. Now ’op to it!

Three weeks ago, Vale of Glamorgan council in south Wales gave the green light for the construction of the Defence Technical College in St Athan. Though with a price tag of £700m, describing this development as simply a college is a bit like describing Buckingham Palace as a roomy detached house. This, as design and construction director Alastair Page puts it, is more like building a small town from scratch.

The site covers an area of 280ha, and you begin to get a sense of the challenge by the roll call of what’s needed – 12km of roads, an energy centre, accommodation for 3,000 service personnel, offices, workshops and classrooms, as well as shops, health centres, cinemas, churches, swimming pools, a museum, 21 sports pitches and a Hindu temple for the use of Gurkhas and other soldiers (see below). And while it may be “like” building a small town, it’s actually far more complicated than that.

The project may sound like an ambitious undertaking for the public sector in an age of cuts, but it’s actually part of a rationalisation drive. The Ministry of Defence wants to centralise the way it provides non-combat training – the technical trades that include everything from learning to service tanks to taxiing aircraft and using the latest high-tech communication gear. At the moment, the army, navy and RAF do this separately on dozens of sites around the UK, but with obvious overlaps it makes sense to try and consolidate them under one roof.

Doing this, though, requires a pretty unique facility. The college is being built by the PFI consortium Metrix (a 50:50 joint venture between facilities management company Sodexo and international provider of technology services QinetiQ), whose role extends to running and maintaining the facility for the next 30 years and, uniquely, providing the training. It’s a bit like being the consortium behind a PFI hospital and also being asked to provide the doctors and nurses. And with a value of £12bn over the project’s lifetime, it’s one of the largest and most complex PFI projects undertaken by the government.

So how do you get a facility like this off the ground and make sure it can be built to budget and in a timescale of four years? In fact, where do you even begin writing the brief? The first major hurdle was coming up with a suitable site, especially when you consider that the facility needs to house some massive training kit, such as aircrafts and tanks, and hold up to 6,000 people throughout the day.

Page believes the success of Metrix’s bid was in part down to the proposal to use St Athan. It’s a large and underused site but crucially it’s also home to the Red Dragon superhangar. This was a state-of-the-art aircraft maintenance facility completed just four years ago that can hold up to 48 Tornado jets. It’s one of the largest covered spaces in Europe, but no sooner was the £107m building completed than a change of strategy made it redundant. “It is virtually brand new and perfect for a lot of the heavy asset training, so we saw the opportunity to reuse it. That was a big feature,” says Page.

It was then down to the masterplanning. The question was, is it better to assemble the construction team and then develop the brief or do it the other way round? “It’s a bit chicken and egg,” says Page. “We took the decision to appoint some of the design team early and come up with a vision of what the scheme should be.”

The architects, masterplanners, cost consultants and Laing O’Rourke, the main contractor, were brought on board. “We got everyone together to look at every aspect of the estate,” says Page. What they arrived at were nine themes that would act as the framework against which everything could be measured. These themes embraced everything from costs and lifecycle analysis to sustainability targets and construction techniques. “They are the guiding lights for the project,” says Page, and as the scheme developed the team kept returning to these.

The tricky bit, though, was knowing exactly what to build. Apart from knowing that it needed accommodation, training facilities, sports grounds and so on, the only thing the designers had to go on was the population, which had been worked out by the training arm of the consortium.

With this, the design team could work backwards to determine what facilities were needed. The MoD has its own strict specification standards for buildings on its estate set out in the Joint Service Publications. “These basically gave us the size of the buildings required so that we could practically start designing the buildings,” says Mike Warren, architectural director of Scott Brownrigg.

Resolving the masterplan was a case of juggling the positions of the various buildings with the infrastructure. It’s easy on a project built from scratch like this to fit the infrastructure around the architecture and the team was determined not to build in big engineering challenges that might result in the need to shift thousands of tonnes of earth and import fill.

But there were other considerations. “You have to understand how the military thinks – it trains people in a different way and having a hierarchy of rank is fundamental to it,” says Warren. So a layout evolved with a formal tree-lined avenue from the entrance down to the parade ground, at right angles to which is a less formal axis. “This way we recognise the need for formality but also in the evening when they are in their civvies it is a nice place to live.”

It’s also the first time that all of the services will be brought together on the same site and the design has had to reflect this. Each of the services has slightly different ways of doing things and when the personnel aren’t receiving their training they need to be able to keep their separate identities. A number of design features have been introduced to address this. For example the central facility, Military House, will have four entrances – one each for the navy and airforce, Royal Electrical and Mechanical Engineers and Royal Signals. These will be individually tailored for those services and allow them to display their regalia. “This isn’t some bland vanilla establishment – they are here to learn a trade but also keep their identity,” says Page.

With 90 buildings on the site, the only way to deal with it was to break them down into chunks. Capita Architecture took on the design of the training facilities, offices and support buildings, while Scott Brownrigg looked after the living accommodation, recreation and sports venues. Having multiple architects on a scheme brings its own challenges, so it might sound counter-intuitive that a third was added to the mix. HLM came on board as executive architect to sit with the client and provide it with a design “conscience” and also introduced a rigorous review process.

The way it worked was that Capita would go away and design its buildings and Scott Brownrigg would do the same. Then they would review each other’s designs, while HLM chaired these reviews and also did its own evaluations.

Seven major design reviews have taken place across stages C and D. The early ones ran over three days, bringing together 40-50 of the senior designers, plus representatives from the training side, the facilities management teams and the delivery team. These were all-encompassing and were about making sure the overall configuration of the estate worked.

As the design moved into more detail, so the reviews took place with smaller teams looking in more detail at specific projects. This included measuring the schemes against Defence Estates’ design excellence evaluation process – a sort of Cabe for the military. “Occasionally things were shot down and sent back to the drawing board, but largely what was done early on has survived with some development,” says Page.

This begs the question, why not bring all the different parts of the team together into one office? This was considered at the bid stage, but the cons of having the 150-strong team under one roof outweighed the pros. The biggest issue was flexibility – the team hasn’t been working on the project flat out all the time and there have been periods when workloads have slowed considerably. Also, says Page, he didn’t want the different design approaches to become watered down.

Of course, one of the risks on a project like this is that the architecture lacks cohesion. To address this, Capita came up with an architectural design manual at Stage C, which pulled together some general principles for the look of the buildings. This took a suitably regimental approach, picking out which of the facades were most significant, such as the commandant’s quarters, the messes and the buildings at the entrance. It then came up with a palette of materials, such as Welsh slate, and design features, such as colonnades, to reflect this. “A lot of the buildings look different because they are doing different things, but there is some common language and similar elements are used, so you get that crossover in the architectural language,” says Page (for more on the construction, see below).

The project has so far been four years in the making and is due to start on site in earnest this time next year. Page says it’s the scale and the sheer number of things happening at the same time that makes it different. “The trick is to create a framework with some hard rules around the technical specification, add some design guidance on the architecture and then regularly review it”. So far, so simple. Now all they have to do is build it.