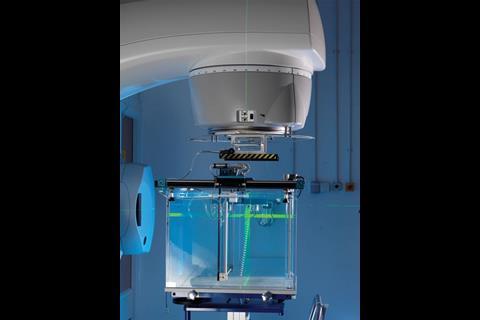 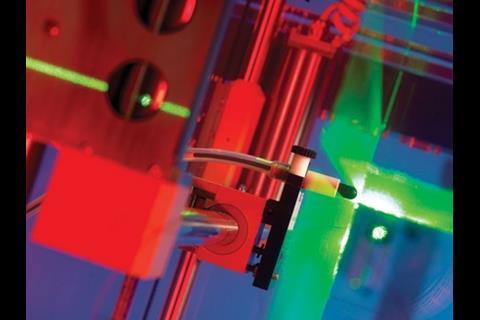 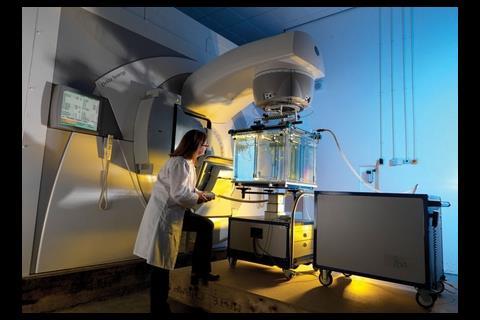 An NPL scientist setting up an experiment. The tank of water is used to measure the output of the radiation beam from the linac machine in the laboratory 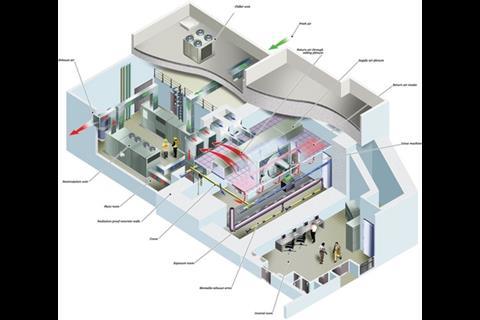 Building a laboratory where temperatures are controlled to the nearest 0.1ºC is scary enough. But when you have the added possibility of radiation leaks and you know the job finished off the last firm to try it, well, you could forgive Arup for being ‘a bit nervous’

If this laboratory had been around 10 years ago, contractor Laing O’Rourke wouldn’t exist today. It’s a highly specialised facility at the National Physical Laboratory (NPL) where temperatures are controlled to ±0.1ºC so that scientists can record a variety of measurements, often to the nearest millionth of a unit. At the turn of the millennium, Laing Construction was rebuilding the NPL and had to provide some of the labs with the same temperature tolerances. It failed to do so, lost £70m on the job and was subsequently sold to concrete specialist O’Rourke for the princely sum of £1. From these ashes rose the mighty Laing O’Rourke (which notably declined to take over the NPL contract).

At the time, there was talk of labs being handed over to scientists who then complained that they didn’t meet the spec and handed them back again. Offices were said to have been commandeered for air-conditioning plant that took up more space than the areas being controlled. In 2005, the DTI gave up and paid off the Laser PFI consortium, of which Laing was part. It decided to complete the laboratories on a piecemeal basis by issuing separate contracts for elements of work.

All of which is what brought Arup to the west London site in September 2005. It agreed to lead the design for a £5m lab that had the same demanding temperature specification that brought down Laing. The difference was that, with this one, there was also the possibility of radiation leakage to contend with, as well as an unavoidable need to circulate large amounts of fresh air.

Fast-forward three-and-a-half years and the project has just been completed. So the question is, how did Arup succeed where Laing did not?

“We had done close temperature control before, but not to that degree,” says Christian Allison, Arup’s design manager. “I was a bit nervous, but it also made it more interesting,” adds Stefan Sadokierski, the services engineer on the project.

Sadokierski’s nerves were understandable: the only examples of the same degree of temperature control he had found were in high-tech industries where process equipment is temperature controlled, but not the space around it. The challenge with controlling the air temperature is that any heat source, such as lights or equipment, messes it up. People are a particular problem, as they move around and do things like open doors. The materials used to construct the space are also important – use lightweight materials and the temperature will change when the sun comes out.

On top of all that, this lab had specific constraints of its own. It houses a £1.5m electron linear accelerator (linac), which is used mainly for calibrating the equipment used for radiotherapy in hospitals (see below). These give off significant amounts of radiation, which meant the whole room had to be specially shielded. The presence of radiation also made getting conditioned air into the room more difficult, as conventional ductwork could have allowed it to escape. But the biggest problem was that the linac ionises the air, which produces ozone, which can cause respiratory problems. This meant that fresh air had to be introduced at 1.3m3 a second, according to Sadokierski. “If this was an office, that would be enough for 110 people,” he says. This naturally made the issue of controlling air temperature even more problematic.

“It took us a while to convince ourselves it could be done,” says Sadokierski. “We did the project cautiously and took time to understand what had to be done – not just the temperature constraints but why these constraints were necessary.” Careful analysis of the requirements revealed that only an area measuring 2m3, in which samples were analysed, needed to be controlled, rather than the whole room. “If you look at the heat gains from the equipment, it made it almost impossible for the whole room,” says Sadokierski.

The second bit of good news was that the high levels of radiation meant there would never be people in the room when the temperature needed controlling and the doors would always be shut.

Controlling the critical area was still a very onerous task as it was not isolated from the rest of the room. The job was broken down into two key parts: the first was working out how much conditioned air was needed and how to distribute it, assuming the air supply was at a perfect temperature. The second job was how to get the air to that temperature. Proving this involved building mathematical models, then running dynamic computer models to validate them.

Other close-control laboratories at NPL supply air through the ceiling and extract it at floor level. “It’s common sense but when we did the analysis we found it wouldn’t work,” says Sadokierski. This is because warm air produced by the equipment rises and disrupts the air that is being pulled downwards. Modelling showed that it was better to introduce the air through the ceiling and extract it in another part of the ceiling in a U-shaped curve. Heat-producing equipment could be positioned on the air’s upward cycle out of the room.

Modelling showed that the ideal number of air changes needed to maintain the correct temperature was 80 per hour. However, this was found to be unfeasible: “The trouble with 80 is that it adds an awful lot of cost and uses a lot of energy,” says Sadokierski. It was decided that, as 40 was definitely too few, 50 air changes an hour would do the job.

With air distribution sorted, attention turned to ensuring that it would be supplied at the correct temperature. Amazingly, this is done using standard air-handling units and chillers, combined with some high-spec valves, controllers and temperature sensors. Sadokierski explains that the air temperature is progressively tightened as it passes through the system: a dedicated set of air-handling units conditions fresh air that comes into the system at about ±1ºC; this comes out at a tolerance of ±0.5ºC and is mixed with the air recirculated from the lab; this then gets it down to ±0.25ºC before it passes into the air-handling units where it is conditioned to within ±0.1ºC. The secret is to cool the air to 2ºC below the final temperature and raise it extremely accurately using an electric reheat coil.

Tests showed that the installation worked as designed, although the fresh and recirculated air did not mix as predicted in the second set of air-handling units. An additional temperature sensor took care of this. A special sensing array was constructed to test the system; this measured the temperature in the critical area every 500mm and showed that temperatures only deviated by ±0.06ÞC. In other words, Arup had actually beaten the specification. If this had been done 10 years ago, today’s contracting landscape would look very different.