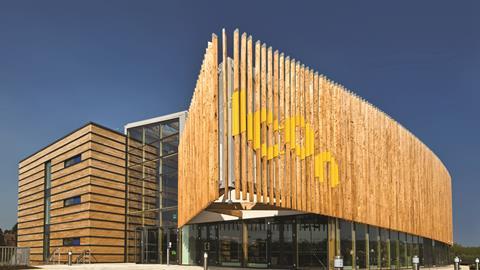 What will drive sustainable construction in 2012? Early indications suggest that regulations, corporate responsibility and energy consumption will all play major roles - and that this could be the year that the gap between a building’s predicted and actual performance is scrutinized. Andy Pearson reports

When it comes to green construction the adage ‘change is the only constant’ has never been truer. The planet’s climate is changing, the economy is in a state of flux and now the government is moving the green goalposts with adjustments to the feed-in tariff and proposals to water down revisions to the part of the Building Regulations dealing with energy. Yet despite these and other changes, sustainable schemes are still being designed and new, low-energy developments still constructed. In the past regulation and client demand have been the drivers for sustainable construction, will that still be the case in 2012?

Jack Pringle, senior partner at architect Pringle Brandon, says there are a number of issues driving sustainable construction with larger commercial clients, in particular, embracing sustainability as part of their corporate responsibility commitment. “In the world of commercial tenants, where I predominantly work, companies take sustainability very seriously, they track travel emissions, paper usage etc, because they want to be part of the future not the past.” As result, he says, the commercial sector is “in advance” of the public sector.

The same commitment to sustainability cannot be said to be true for the public sector. “The recession will inevitably take its toll with short-sighted organisations that think it costs more to be low energy and sustainable,” says Pringle. “The worst offender at the moment is clearly the government with Michael Gove’s proposal to drop the BREEAM targets for schools, which is absolutely appalling; the government is meant to set the standard rather than bottle out when things get too difficult”.

Despite the proposed reduction in environmental targets for schools Pringle is optimistic that 2012 will bring about a transformation in public sector procurement. “The good thing about the public sector is that we are at a time of change: the terrible old systems of PFI and Building Schools for the Future have been discredited.” As a result, he says it is “up for grabs” how a new system can be put together to build the public estate. “What would be good would be if we could get some intelligent new direction coming out of the various people looking at this throughout the course of the year.”

Jeremy Watson, a director of global research at Arup and chief scientific adviser for the Department for Communities and Local Government, says that renewables will have a bigger role to play in the sustainable building of 2012. “Speaking from a personal perspective, I think that, not withstanding the reduction in feed-in tariffs (FITs), the drop in PV prices and the introduction of the Renewable Heat Incentive will mean micro-renewables becoming increasingly viable,” he says.

In addition to the increased use of renewables, energy regulation is expected to be a major driver this year. “Builders are becoming familiar with extending fabric’s performance, installing mechanical ventilation and heat recovery (MVHR) and fitting some renewables; with the recent consultation on 2013 Part L, this may be a year of transition as builders begin to think about future requirements,” Watson says.

Alongside the Building Regulations, Watson says the Carbon Reduction Commitment is also starting to have an impact in reducing energy consumption. “The CRC is starting to push larger firms to consider energy efficiency in their operations,” he says. As a result, with designs becoming more energy efficient, the need to source sustainable construction materials will become more of an issue. “[I believe] whole life carbon will come to the fore with embodied carbon becoming a greater proportion of a building’s cradle-to-grave footprint,” says Watson.

Pringle agrees that energy consumption has become an issue for larger companies.

He says the big multi-nationals have already got the message on the need to cut energy consumption and so developers are starting to get the message. “Developers
know the existing building stock will become unattractive to let in five years’ time if it hasn’t got the right energy performance criteria.”

This increasing focus on a building’s energy consumption will highlight any differences between its claimed and actual performance. “One of the issues I’m hearing again and again is that there is a big gap between prediction and performance in terms of energy use; it is something that in 2012 we’ve really got to start to look at,” Pringle says.

For contractor Skanska the difference between a building’s design performance and its actual performance has become such an important issue that the firm is introducing a new business model. “We are seeing a growing awareness that there needs to be some form of guarantee that designed performance and actual performance meet in the real world - it’s time to walk the talk,” says Noel Morrin, senior vice president for sustainability and green support at Skanska. He says that from an international perspective, guaranteed energy performance will be a big commercial driver in 2012. “We see big opportunities in renovation of commercial offices to offer Energy Performance Guarantees,” he says. According to him this new commercial model is ready to be rolled out for some clients: “serious discussions are already under way”. The firm is already working on projects with a similar focus in performance on some schemes in the US. “Skanska has just delivered its first scheme - the new science building at the Bertschi School - under the Living Building Challenge (LBC) in the US, where certification is only awarded after a full year of operation,” explains Morrin.

The LBC is one of a growing number of environmental assessment tools, including BREEAM, EU Green Building, LEED and CEEQUAL, that will be used in 2012. There are concerns that the increased use of such tools will change the focus of the design and construction team to one of achieving compliance with the tool at the expense of a building’s overall performance. “There is too much focus on getting the certificate and not enough focus on the underlying performance,” Morrin warns.

A similar picture is starting to emerge globally for Skanska. “There are opportunities to address the social aspects of sustainable development,” says Morrin. As a result, he says Skanska is focused on the impact of global megatrends like population growth and rapid urbanisation on the built environment. “We see opportunites around energy, carbon, materials and water,” he says.

Unlike Watson, Morrin remains unconvinced about the viability of some renewable technologies being a key part of any sustainable development in 2012. “Thanks to an appalling lack of consistency in the EU and beyond, I think the business risk regarding renewable energy, and PVs in particular, has reached a point where it is becoming nigh on unacceptable”. He laments that fact that many EU states have already done a U-turn on feed-in tariffs, or are proposing changes: “Where are the long-term price signals we were all promised?” he asks.

The feed-in tariff is a theme Kitson says will have an impact over the year. “Unsurprisingly, decisions made in relation to the feed-in tariff have had a significant impact, with land-based micro-wind turbines especially out of favour.”

Along with wind turbines other technologies may fall out of favour including biomass and heat pumps. Arup’s Watson says there is “some concern over the sustainability of logistics and fuel affordability” for biomass. He also points out that “there is evidence of potential problems with the installation of certain types of heat pumps”.

Looking further ahead what are likely to be the big drivers in the coming years? “I think regulation and client demand will continue to play strong roles; the Green Deal and Energy Company Obligation are likely to be very significant for existing properties; while adaptation to climate change and new Building Regulations in 2013 and 2016 will all have a role to play,” he says. One thing is for certain - the adage about change will be as true in 2012 as it was in 2011.